….THE HARBINGER FOR TOTALITARIAN RULE

I shall argue-those who carry out a wanton assault on truth at the highest level of the state apparatus are dabbling in the harbinger for totalitarian rule. In doing so, I shall draw attention to the denial of the existence of extrajudicial killings by the highest representation of power in the Cooperative Republic of Guyana. One cannot, for one second, fail to observe the attempt to wipe away documented and crystallized history. Regrettably, state-sponsored executions have been with us and insofar as there are no attempts to deliver justice to those who have suffered from this scourge, it will remain with us. As a result, anyone who seeks to deny this glaring fact is most deserving of an upset pen. Important to note-if this is done on a street corner, we might be able to turn the other cheek. But when leaders both de facto and de jure engage in this Stalinist attack on truth, the patriotic intelligentsia must be marshaled. From Arendt to Albright, we have been warned about this poisonous ideology that proceeds from the ambitions of gargantuan egos that seek to dominate and control every crevice of human existence. Once this monster raises its head, it is the beginning of the slow march to all the isms associated with bad rule. Hence, we must shout fire as soon it manifests.

THE DENIAL OF TRUTH AND LEADERSHIP
The revision of history and the denial of truth automatically place a leader in the corner of the pantheon of the ignominious Chieftains such as Stalin, Mussolini and Adolf Hitler. What did they have in common? Besides being totalitarian strongmen, they all emphasized promoting the big lie at the expense of inescapable and obvious truth. They were prepared to tell you that your name given to you at birth is not your name. They stood at the ready to tell you that the earth is flat despite science and experience demonstrating the contrary. In the pursuit of extending their powers to your mind, every effort was made to ensure that their engineered truth, was also your truth. They consistently asked the daring question: who do you believe? Me or your lying eyes? To that end, they recruited and elevated their misinformation Czars. Joseph Goebbels bears the ignoble title of being the most popular of those negative exemplars. He frighteningly reasoned-‘If you tell a lie big enough and keep repeating it, people will eventually come to believe it. The lie can be maintained only for such time as the state can shield the people from the political, economic and/or military consequences of the lie. It thus becomes vitally important for the state to use all of its powers to repress dissent, for truth is the mortal enemy of the lie, and thus by extension, the truth is the greatest enemy of the state’. Leaders who exemplify these sentiments are on the path to a quick descent into hell and are giving notice to the possible coming of totalitarian rule.

THE PRESIDENTIAL COMMISSION
If there is a need to mount an argument that suggests that state-sponsored executions never existed in Guyana, the findings of the presidential commission into allegations against the Minister of Home Affairs which was established in 2004 and presented its findings in April 2005, would render such an attempt as an impossible task. Importantly, there are a plethora of exemplars that can easily dispel the untruth under examination but this illustration suffices. Even though the commission exonerated the Minister’s involvement, it noted phone records that linked this high-ranking agent of the state with the killing machine. The prima facie evidence pointed to indisputable collusion between the state and para-military killing squad. This represents the cold hard facts. To deny this, is to eschew that the sun shines on Guyana. Furthermore, in a statement on January 20, 2009, the US State Department expressed concern about the reinstatement of the Minister of Home Affairs and expressed an interest in initiating action against the Government of Guyana. In doing so, the State Department inadvertently conceded to being previewed to intelligence which confirmed the existence of wanton state-sponsored executions. In addition, the U.S. Department of State Country Report on Human Rights Practices 2005 – Guyana stated: ‘In 2004 an informant alleged that Minister of Home Affairs Ronald Gajraj was involved in directing an extrajudicial killing squad. In May a Presidential Commission of Inquiry cleared Gajraj of involvement in promoting, directing, or otherwise engaging in activities involving the squad. However, circumstantial evidence pointed to the contrary, and the commission’s work was hindered by witnesses mysteriously dying or refusing to testify. Gajraj admitted to interactions with some members of the killing squad. Upon the release of the report, Gajraj was reinstated but subsequently resigned his position due to international pressure’. If one denies that state-sponsored executions existed in Guyana, it can be reasonably assumed that these facts are not known or there is an attempt to erase history.

If the latter is the case, we are in trouble.

Sun Oct 10 , 2021
Support Village Voice News With a Donation of Your Choice. Minister of Home Affairs, Robeson Benn last week presented about $11 million worth of vocational tools to the Guyana Prison Service (GPS) to continue the rehabilitation process of prisoners. At a simple ceremony on Friday, Minister Benn said the tools which were supplied through the Citizen Security Strengthening Programme (CSSP), […] 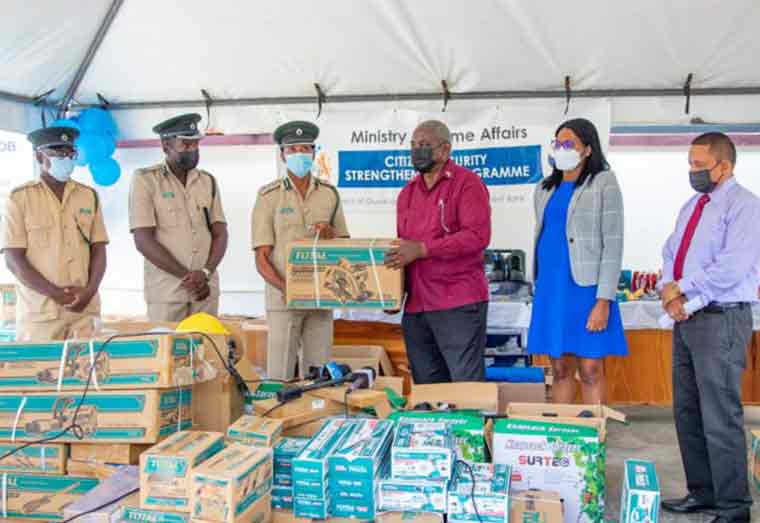