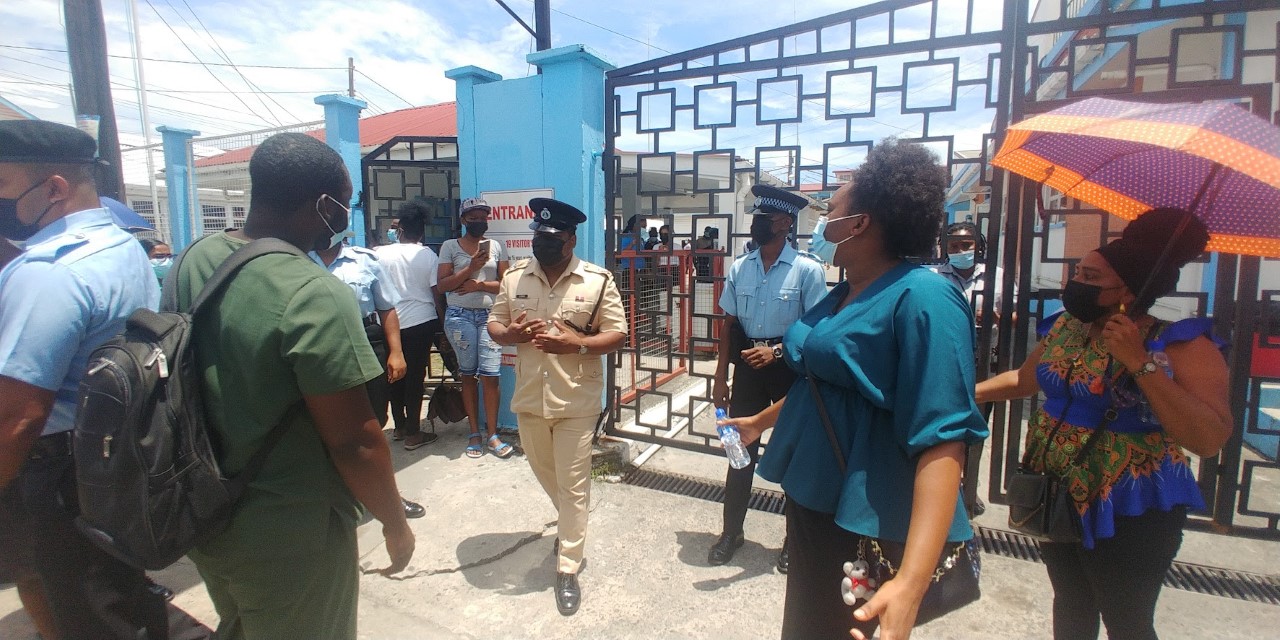 —call for across board adherence to vaccination mandate or its retraction

Unvaccinated health workers attached to the Georgetown Public Hospital Corporation (GPHC) have called out the institution’s management for practices of double standard as they told the Village Voice News that the institution is allowing unvaccinated staff to enter the hospital when it suits them but keeping them out when it doesn’t.

The health workers said that they have had a first-hand view of this as they come daily at the gates, morning and night, waiting to see whether the current health policy will change and they will be allowed to work without restriction.

“Services at the hospital are deteriorating and, from time to time, the hospital would bring in unvaccinated nurses to hold up the services. So, we are saying, if you need unvaccinated persons as we’ve been doing it all the time, just change your policy in writing instead of sneaking us in in the night and then locking us out back in the morning, that makes no sense,” he said outside the hospital.

Then at night, when there are not enough health workers to manage the shifts, they said that doctors are taking up the tasks of nurses. “At the nine o’clock shift, people pass in free. They don’t have the amount of workers that they need in there,” another health worker said. The newspaper was also told that some patients have been directly contacting health workers who are locked out relaying the poor quality of service they’ve received since the reduction in workers on staff.

HOSPITAL SERVICES NOT UP TO STANDARD

Messages from patients, as seen by this news entity, strung on with complaints about delayed or postponed healthcare, especially during the initial days that the new measures were enforced. Health Minister, Dr. Frank Anthony said back in August that if health workers refuse to be vaccinated it would result in a reduction of healthcare services. However, he noted that the majority of healthcare workers have been vaccinated and plans have been put in place to cover missed shifts.

However, unvaccinated health workers in contact with their colleagues on the inside beg to differ. “Patients personally reached out to me and tell me that they didn’t get medication for days, they didn’t get their dressing changed for days and they took self-discharge because of that. That’s what’s going on inside there, the doctors are being asked to do the nurses’ duties based on a memorandum,” Forde said.

The police were called the scene – an entire busload – as a truck was being prevented from entering the compound with what was presumably water. The occupants of the truck were allegedly unable to produce vaccination cards or negative PCR tests to the security who nonetheless planned to let them in.

Assistant Superintendent, Colin Primus sought to discuss the matter with the health workers. He told them that the police were not there to start a confrontation but to keep the peace. Eventually, the truck was allowed to enter. Subsequently, GPHC’s Chief Executive Officer (CEO) retired Brigadier George Lewis met with GPHC’s unvaccinated staff outside the hospital. They requested that Lewis make representation to the Minister of Health on their behalf calling for a retraction of the measures. Lewis said that he could not make this representation on their behalf. He urged the workers to stand to the side where they would not affect movement into the hospital and assured that he would address their claims of double standard.

Health workers who do not report to work within the hospital will be marked absent and will not be paid, according to the Health Minister. Forde expressed that the Government’s vaccination policy aggrieves him because the reason he and others show up to work despite being locked out is because they want to give help to those in need. Being given only two options when the matter relates to one’s health and being denied work if neither of the options is chosen, he said, is a breach of human rights, the Essential Services Act and the Medical Practitioners (Amendment) Act.

“We have been turning up for work since this COVID-19 pandemic started when there was no vaccine, when we were short of PPEs, when they didn’t give us any risk allowance to come and work in this place and we’ve been coming to work faithfully since then. Now, the vaccination policy comes out and they’re telling us if you cannot present a negative COVID-19 test or a vaccination card we cannot come into the institution,” Forde said.

“They’re actually forcing you financially into this position to take this vaccine because we’re public servants. A lot of people out here work for $100,000 or less and they’re telling you you need to produce a negative COVID-19 test every two weeks at $25,000. We’re public servants, we can’t afford it and they know that and that’s why they’re trying to coerce us.” PCR tests cost between $15,000 to $25,000 which could cost an unvaccinated health worker who opts to present PCR tests between 30,000 to $50,000 monthly.

A female contract health worker who was unvaccinated and locked out told the newspaper: “I have underlying conditions, bleeding, ulcers, hypotension. I went for exemption, they say I can’t get it, I must take the vaccine.”

MATTER BEFORE THE COURT

The Guyana Public Service Union (GPSU) has filed legal action against the Government of Guyana for the institution of mandatory vaccination, the prohibition of public servants from their places of employment, the demand that public servants stand the cost of PCR tests to work if unvaccinated and other contentious updates to the COVID-19 Gazetted Orders. Listed as applicants are GPSU’s Vice President, Dawn Gardner, Guyana Teachers Union (GTU) General Secretary Coretta Mc Donald and Guyana Trade Union Congress (GTUC) General Secretary Lincoln Lewis. The only respondent named was Attorney General and Minister of Legal Affairs, Anil Nandlall.

As they await the substantive case, they have requested that the High Court grant an interim injunction prohibiting the implementation of the measures which speak to mandatory vaccination or PCR tests until the determination of the Fixed Date Application. They are being represented by lawyers Darren Wade and Dan Victor Elliott-Hamilton. At a press conference on August 31, the media questioned the GPSU on whether the Courts – which often take years to resolve matters – is the best avenue of the Unions. Gardner said that such decisions are made following consultation with Members.

Posed the same question on Thursday, Forde said: “Yes, I’m concerned about the length of time it could take, but if they persist with this type of injustice out here I think the workers around the country should realise that this is an infringement of human rights, individual rights and a breach of law and they should stand up against it and come together and show the Government that we’re not going to take this nonsense.”

He told the newspaper that he refers not only to health workers but all persons affected by the new measures at Government Ministries and Agencies.

Mon Sep 6 , 2021
Support Village Voice News With a Donation of Your Choice. – as Hughes, Fields & Stoby law firm teams up with leaders to teach students   Come Monday, September 6 when the new academic year begins, 34 children from the community of Werk-en-Rust will be better positioned to understand the concepts that would be taught across the various subject areas […]