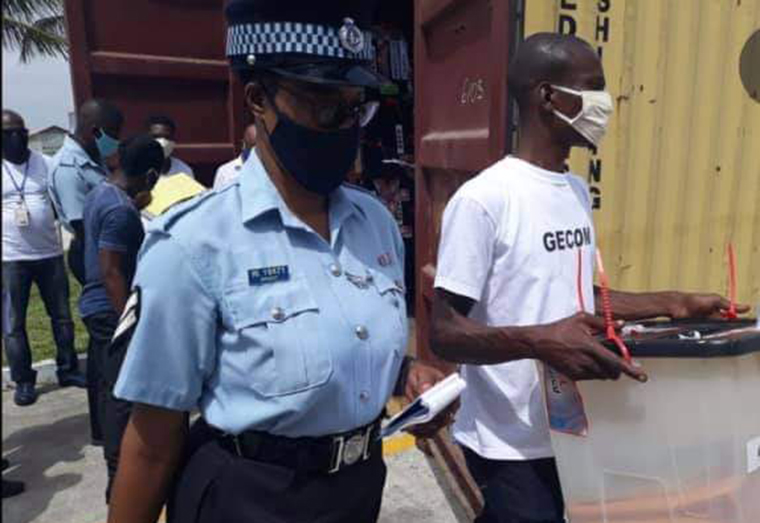 — calls on society to condemn new low in lawlessness and tyranny

The Guyana Trades Union Congress (GTUC) has condemned in the strongest possible term the action by Irfaan Ali administration on Tuesday to have police handcuffed Ministry of Education (Georgetown) workers and escort them out of their place of work on the ground that they have not provided evidence of taking the COVID-19 vaccine or proof of a negative COVID-19 test.

“This is a new low in lawlessness and tyranny, and the local, regional and international communities are being called on to take note and denounce this inhumane and unnecessary conduct by the police,” the statement read.
The ministry in a statement gave a different version of events as reported by the affected workers.

“There is no need to criminalise workers for any act not considered criminal. Concerned citizens are left to ask- What next? Would workers be imprisoned or shot at for failing to comply with directives that are not without questions.  The affected workers are represented by the Guyana Public Service Union (GPSU). GTUC stands in readiness to support the Union in any action necessary to bring resolution to this grave travesty and safeguard the workers’ rights,” the umbrella trade union said.

The GTUC said Guyana is sliding down a slippery slope where those in authority to protect citizens/workers are using the apparatus of the state to attack and criminalise them. “If this is not stopped forthwith, the new low could lead to further confrontation and possible retaliation. The GTUC also notes that only some sections of the society are being targeted and criminalised. It is not lost on citizens that nowhere in Guyana is there a 100 percent vaccination in government workplaces. The GTUC is of the unreserved opinion that the tantum macoute tactic that continues to hound and target some sections of workers will have consequences for all, either in building or antagonising relations amongst and between various groups in society.”

The government, the GTUC said continues to ignore the calls by trade unions, political opposition and members of civil society to take an inclusionary approach in the management of the COVID-19 programme. “They are continuing in a highhanded manner not only forcing citizens to take a vaccine (Sputnik V) not approved by the World Health Organisation but showing open contempt for science, laws and technical advice. This is madness.”

The GTUC said it recognises the high-level vaccine hesitancy in society and charged that the administration’s approaches are not intended to engender confidence, allay fears and hesitancy, but rather reinforce perceptions that it will be their way or no other way. “There also seems to be no regard for persons’ rights, the Chief Medical Officer’s counsel, and the “duty” of the employer under Section 47 (3) of the Occupational Health and Safety Act (Cap 99:10) to provide free testing for the employee.”

The GTUC said the national medical surveillance programme the nation is under has been instituted and is being directed by the government, not the citizens/workers. And if a negative test is a requirement to be in the workplace for fear of the transmissible nature of the virus in the workplace, then the employer, not the worker, must shoulder the responsibility of “cost” according to the extant law. “No Memorandum or Gazetted Order that disregards fundamental principles and laws could be considered acceptable. Good sense must prevail.”

Wed Aug 25 , 2021
Support Village Voice News With a Donation of Your Choice. Three men on Tuesday stole a quantity of items from the Ministry of Health including four blank Covid-19 vaccination books. The suspects aged 24, 42 and 37 are all in poloce custody. In a statement police listed the articles stolen as: four blank blue COVID-19 vaccination books; One stethoscope; 17 […]