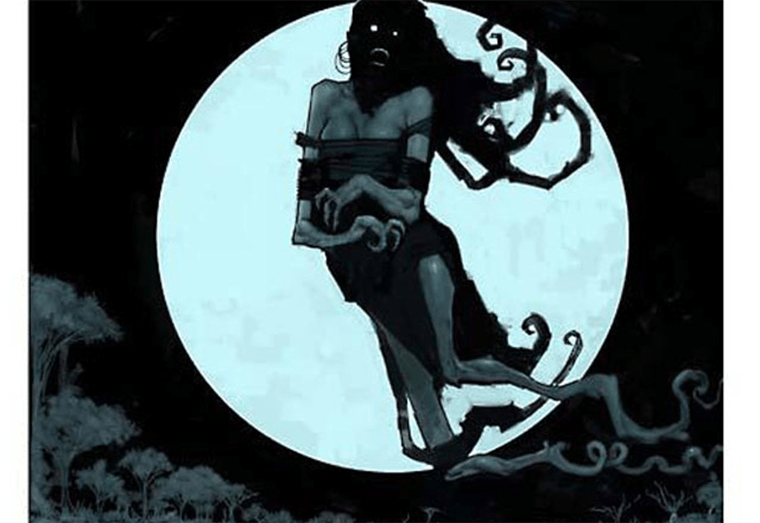 A choorile is a vampire-like creature of East Indian origin and is considered to be of the bhoot. A bhoot (in Indian culture) is a supernatural creature, often the ghost of a deceased person. The concept of the bhoot is subject to various interpretations depending on region and community. In Guyana it is known as a choorile and is a very specific type of bhoot.

Guyana’s choorile is an evil spirit of a woman who had died in childbirth, yet her child lived. The separation from her child torments her and she wails in her grief, much like a banshee of Irish lore. She haunts or terrorizes pregnant women and newborn children.

They resemble a normal human woman, but their feet are turned backwards and sometimes other features are flipped upside down. They are capable of changing their forms at any time and often change to look beautiful or ‘normal’ in an attempt to lure young men to their deaths. Chooriles are often met at crossroads, fields or similar places, not often found on or near the water.

If a young man, or old one, falls for the charms of the choorile and becomes enamoured with her, it is believed that she will cause his death. There have been stories of people living with and outsmarting a choorile, in some cases even marrying one. If you encounter a choorile, it is said that crossing water or leaving shoes behind will save you, as chooriles do not cross water and will spend all night trying to put on the shoes.

Many of the younger generations of Guyanese do not recall this jumbee and she is slowly dying out of memory. Only the older folks seem to remember her or her stories. When someone is crying a lot or acting crazy they may be referred to as acting like a choorile, which is where I came across the word.

Sat Aug 14 , 2021
Support Village Voice News With a Donation of Your Choice. August is the month Africans, in the former British Empire, celebrate Emancipation from chattel slavery which was achieved on 1st August 1838.  This freedom came after centuries of bondage and daily acts of rebellion by the enslaved against the world’s most brutal system. But in the 20th century Africans on […]