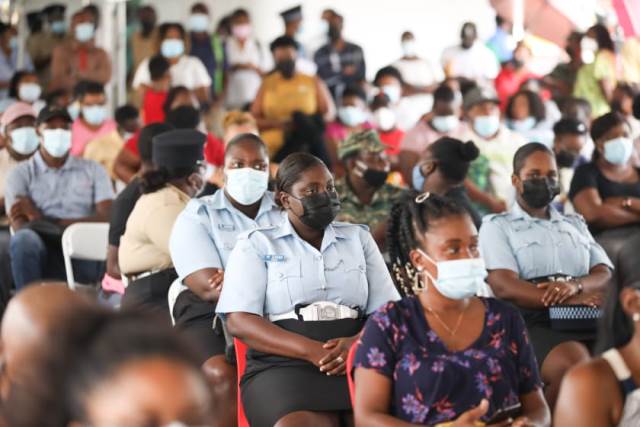 Some 400 residents of Linden, Region Ten are set to receive house lots in Amelia’s Ward, as the Ministry of Housing and Water’s Central Housing and Planning Authority (CH&PA) takes its ‘Dream Realised’ housing drive to the region.

The two-day event, which is being held at the Amelia’s Ward Primary School, will also see 144 persons receiving titles and transports for their lands.

Speaking at the opening ceremony on Monday, Minister of Housing and Water, Collin Croal MP said the PPP/C Government understands the importance of providing adequate housing to Guyanese and the role it plays in self and community development.

The Amelia’s Ward community will have a nursery school, health centre, market, bus and taxi terminals, playground and recreational facility. Lots will also be allocated to applicants who are members of the Disciplined Services.
“This house lot allocation in Amelia’s Ward is not being done in isolation. In fact, between now and 2022, our government is expected to expend at least $2.9 billion for infrastructure in Region Ten under the Housing Sector,” the Minister said.

In January, His Excellency Dr. Mohammed Irfaan Ali visited the region and announced the construction of 1,000 homes for young professionals in Amelia’s Ward.

Subsequently, $288 million was set aside for the construction of elevated housing units. Another $6 million was spent on the clearing and levelling of land for housing development in the Amelia’s Ward new housing area and $100 million for 6 kilometres of asphaltic concrete roads, reinforced concrete curbs and walkways.

Another $1. 6 billion has been proposed for 2022, for additional infrastructural works including reinforced concrete roads, drains and culverts and pipe network in Amelia’s Ward.

The CH&PA has more than 4,000 applications pending from Region Ten from as far back as 2010.
Minister within the Ministry, Susan Rodrigues MP said the exercise surpasses house lots distribution in the region under the previous administration during the last five years.

Residents in attendance at the Ministry’s Dream Realised housing drive.

The Minister assured the residents that, “Linden is important just like every other region as we continue to execute our plans in the housing and water sector.“

In April and June, distribution exercises were hosted in Region Two, where a total of 700 persons received house lots in Onderneeming and Charity. Distribution will continue in Regions Four, Three and Nine respectively. This will bring the Government closer to realising its goal of distributing 10,000 lots during its first year in office and an overall 50,000 lots in five years. (DPI)

Wed Jul 14 , 2021
Support Village Voice News With a Donation of Your Choice. A Cessna aircraft owned by the Jags Aviation suffered a runway excursion at Eteringbang earlier on Wednesday. At Approximately 11:34hrs today, (Wednesday) the Guyana Civil Aviation Authority (GCAA) received a report of a CESSNA Caravan operated by Jags Aviation involved in a runway excursion upon landing at Eterengbang airstrip in […]