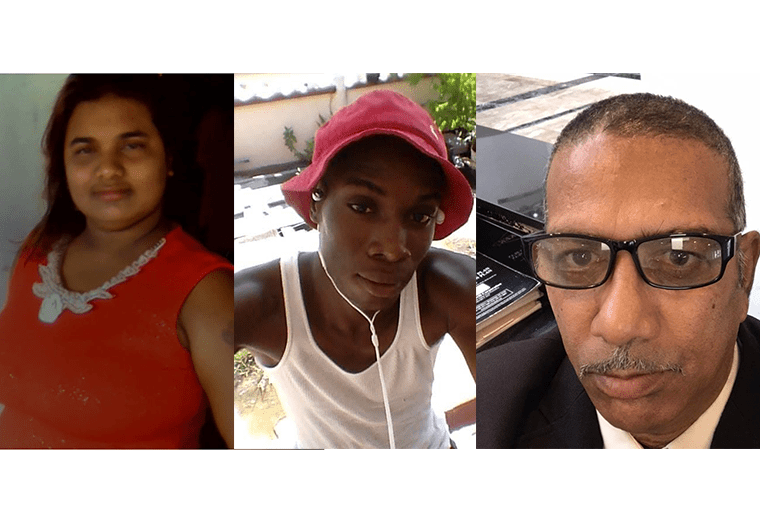 The horrific crash which claimed lives of three people on Monday along the Fort Wellington Public Road, West Coast Berbice has also left three separate families broken and in disbelief.

Twenty-three year old, Carlos Edwards of Lot 39 StanleyTown New Amsterdam was the driver of motorcar HC 6077 which slammed into a concrete fence. According to reports, Edwards was negotiating a turn when he lost control of the vehicle and crashed into the fence of the Guyana Election Commission building before coming to a halt in a nearby drain.

At the time of the incident, Edwards was heading to the city with four other passengers and his six- month old baby. Fifty-Nine year old, Hookumchand Parmanand an overseas-based Guyanese, formerly of #36 Village, Thirty-Six year old Shaband Latif, of Lot 83 Brothers Village, East Bank Berbice were the other persons killed in the accident.

When the Village Voice News visited the home of the young driver,  his relatives were all inconsolable and could not speak.

A relative of Parmanand, Kennard Peters said the man recently arrived in Guyana to take care of some important businesses. However, the relative noted that this is Parmanand’s first time back in Guyana since he migrated several years ago.

“He came to get some paperwork done because he had to look after his benefits and so. So he was wrapping up everything and he was going down town the morning to get his last set of papers singed. It is a real sad situation because we didn’t expect this to happen now. He came on vacation and this is what he meet up with”

Parmanand would have celebrated his sixtieth (60th) birthday today, June 15th, however, the plans for a birthday celebration has since turned into a plan for funeral arrangements. Parmanand arrived in Guyana with his wife and son and they were expected to leave the country to go back home on Thursday.

Parmanand’s wife was in a state of shock. When contacted she would only say, “they driving too fast, them kill him.”

Meanwhile, the husband of Shabana Latif said he is at a lost for words  with the passing of his wife whom he spent 10 years with together. The man, 32 year old Ramsammy Kisten said he cannot come to grips with the sudden demise of his wife, noting that they had so much planned for the future.

The grieving man described his wife as a caring, loving and supportive woman who has always been by his side. He said when he heard of his wife’s death, he rushed to the scene and then to the hospital where his worse fear was confirmed as he had to identify her body.

“I drop her off by the park like around 4:30 Monday morning to catch something and go Georgetown and then when she go in the car and so I left. I come home back and I get dress and I went out to work and around 6:30 time I didn’t see she call because she would usually call and say she reach and so but I didn’t take it as anything. Till 9:00 time then I get the message that something happen to my wife and this accident happen before 6”

The man noted that he had no idea that his wife was involved in an accident. “The girl that she does usually come back home with is a friend and so when the girl see me now yesterday she she ask me where my girl deh because she ain’t reach hospital yet. So I wanted to know what going on because I know she does call when she reach. So I end up taking my car and go over and then I know what happened and I go hospital and police station and so.”

Kisten noted that when he saw his wife’s body he noticed injuries to her head. He said he is unsure as to if his wife died on the spot or at the hospital.
Kisten and Latif shared a 10 year relationship and has an eight- year- old son. Latif was previously married and bore three children in that previous relationship.

According to Kisten, Latif’s 19 year old son was involved in an accident sometime last week. Following that incident, he sustained injuries to his neck and has been a patient at the Georgetown Hospital for almost a week now. As every mother would do, Latif took time off everyday to travel from Berbice to Georgetown to visit her son and ensure he is fine. At the time when Latif met her death, she was on her way to see her son.

“She son deh in the hospital so every morning she does go up and so to feed him. We said we woulda go on weekend and so because you know to drive to town is hard with passage and so and the situation we in right now, we can’t make it to go everyday. Is not a problem to go but we in a poor situation man and I tell she to catch thing because everyday she does catch thing and we ain’t know this gonna happen.”

The  man said he is willing to accept any assistance for funeral arrangements giving the state he is currently in and he wants to bid his wife a proper farewell.

“I will need some help because I don’t know about her family and how much they will help”
Persons wiling to assist can contact Kisten Kisten on telephone number 627-3530.

Shuman backs govt to oust Patterson as chairman of PAC

Tue Jun 15 , 2021
Support Village Voice News With a Donation of Your Choice. …Opposition sees move as an attempt to “undermine” country’s democracy  By Svetlana Marshall Leader of the Liberty and Justice Party (LJP), Lenox Shuman teamed up with the People’s Progressive Party/Civic (PPP/C) Government to vote for the removal of David Patterson, MP as Chairman of the Public Accounts Committee (PAC) but […]