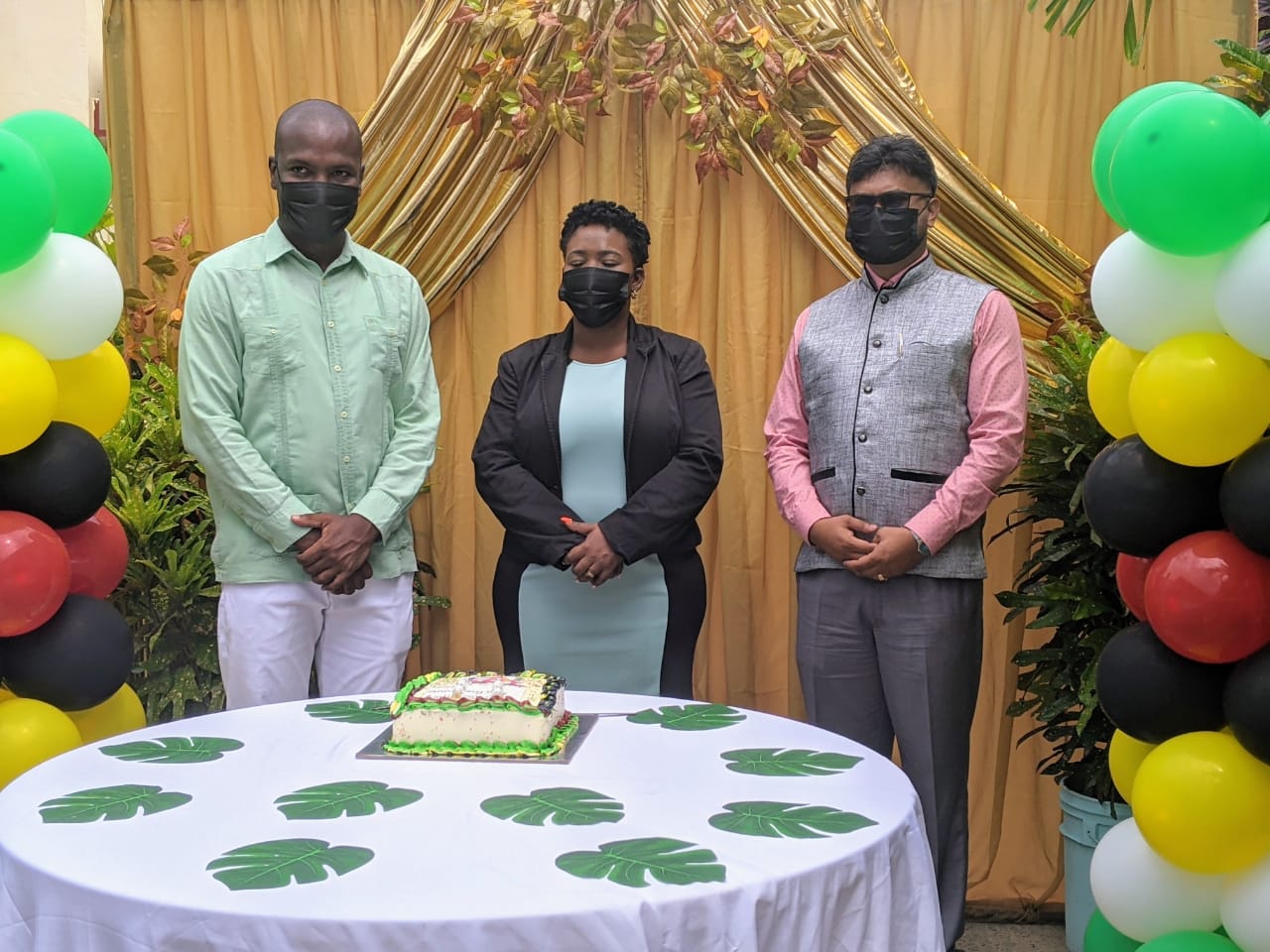 The township of Bartica on Friday celebrated five years since it was declared Guyana’s seventh town by former president, David Granger.

The Mayor of the town, Gifford Marshall and his council, embarked on a project to erect a Sign of PEACE in the township, to commemorate the momentous milestone. The PEACE Sign was commissioned on Friday by Mayor of Georgetown, Ubraj Narine and Marshall, in the presence of the Mayor and Deputy Mayor of Linden, Waneka Arrindell and Wainewright Bethune respectively. Deputy Chairman of Region Seven/ Former Deputy Mayor of Bartica, Kamal Persaud; Former Regional Chairman, Gordon Bradford; Councillors of Bartica and other patrons.

At the short commissioning ceremony, Mayor Marshall said that each letter in PEACE represents an important building block of a democratic society. These are; Patriotism, Equity, Accountability, Courage, Environmentalism. He noted further that the PEACE Sign not only speaks to the conscience of the people of Bartica, but it demonstrates their priorities as they move forward, working together to achieve the common goal of the country’s motto “one people, one nation, one destiny”.

“The question is, why PEACE? Well firstly, the word peace is recorded in a number of holy writings, for example; Romans 12:18, NIV says ‘If it is possible, as far as it depends on you, live at peace with everyone.’ A Buddha Quote says ‘The only way to bring peace to the earth is to learn to make our own life peaceful.’ Asalam-o-Alaikum means “peace be upon you”. “Peace be upon you for what you patiently endured. And excellent is the final home” is written in Quran 13:24. To this end, we must remember that it is our divine responsibility to be at peace. Secondly, the growth of our town hinges on these five pillars. As a consequence, every citizen in Bartica will be encouraged to apply these words to their every action, as we unite for a great future,” Marshall remarked.

In his remarks, Mayor Narine commended the Mayor and Councillors of Bartica on their achievements over the past five years. He said that this PEACE Sign comes at a time when many Guyanese are yearning for the day they can establish peace amongst themselves, without the constant impact of political or race division every election.

“As the Chief Citizen of the City of Georgetown, I am saddened by the daily disruption of our peace that our citizens are encountering daily in our beautiful Guyana. Whether it is dealing with COVID-19, Gender-based violence, murders, robberies, the garbage situation, or more pressing issues our Government fails to address. Falling back into old habits is not what our country needs for its economic growt. To establish peace, we must first stand up for ourselves as Citizens for all these injustices we face, whether it’s in our homes, township, city, and our country holistically. It is time to establish peace by understanding that peace is a state of being, with the ability to dwell in tranquility, free from disruptive behaviours, disturbances, annoyances, and wars. If we all come together in genuine love, understanding, compassion, and care for each other, we can help establish not only peace, but also happiness around us. We live in a world where it seems like all hope can be lost and we can never establish the peace we seek, but if we remember that “One good deed can change the world”, we will truly understand the difference and impact we make as individuals,” Ubraj posited to the people.

Mayor Marshall said “the centerpiece of PEACE is fenced with local hard wood, painted white and manicured with choiced flowering plants such as ficus and cactus. Its unique location, mounted in the “V” of two streets, not only creates a panoramic aesthetically pleasing view, but serves as a visible reminder of our commitment to a better Guyana.”

Bartica was declared a town with a vision that Former President Granger had to be the model of all towns in Guyana. It was reported in the media over the years that prior to 2016, Bartica was starved of development, but things would have changed when the former administration took office. Over the years of being a town, Bartica would have seen momentous changes in various sectors including education, health, infrastructure, tourism and more.

To this end, Mayor Marshall said that regardless of the change in government now, the township refuses to step backwards into what used to, but rather, it intends to move forward into even greater developments for the town and its people.

Teen created 3 businesses during the pandemic

Mon May 10 , 2021
Support Village Voice News With a Donation of Your Choice. By Gabriella Chapman  There is no question that this generation of youths are championing most aspects of their lives from an early age. The progression to a technological era has put them in such a position of advantage to learn and grow, having access to knowledge at their fingertips. We’ve […]