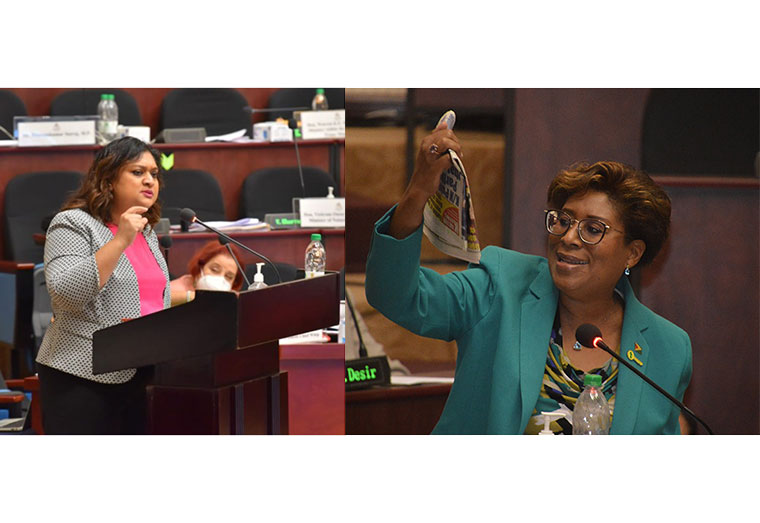 In an attempt to bridge the digital divide at a time when the country continues to grapple with the growing effects of the COVID-19 pandemic, which has resulted in, among other things, the closure of schools and or significant reduction in face-to-face learning, Opposition Member of Parliament, Catherine Hughes has lobbied the government to provide every child with a laptop computer.

In her presentation on the $552.9B Budget proposed by the People’s Progressive Party/Civic (PPP/C), Hughes – the former Minister of Public Telecommunications – said Guyana can do better than 11,000 laptops. “We are the fastest growing oil producing nation but the best we can do is 11,000 laptops. Surely by now with access to 607 million US [dollars] from oil reserves every Guyanese child should have been given a laptop!” she told the National Assembly on Friday as the Budget Debates came to a close.

Senior Minister within the Office of the President with responsibility for Finance, Dr. Ashni Singh, in presenting the 2022 Budget, disclosed that the Government, as part of its plan to accelerate the digitalization of the Education Sector, will be equipping 300 primary school teachers and 125 secondary school teachers with laptops and computing devices while 11,000 tablets and flash drives with learning materials will be provided to students with limited access to the internet.

But Hughes insisted that Guyanese students deserve much more. From the onset of her presentation, she explained that there is a huge disparity in the educational system, which has now transitioned into a “virtual apartheid” in education between the well-resourced and privileged and those who are condemned to attend schools with little or no internet facilities. Hughes argued that there is a direct correlation between access to internet and the prospect of improved results and better matriculation. “Children who have little or no access to the internet will not access the educational material and resources which are essential to improving their opportunities to secure better grade,” she submitted.

As such, the APNU+AFC MP said “in order to reverse the virtual apartheid in education between the better resourced, better connected, the haves and the have nots, a targeted allocation of financial resources to the most disadvantaged underprivileged sections of society is required.”

She said a plan for underprivileged schools, training and research facilities is critical for the advancement of the country’s Education Sector. Whether urban, rural or in the hinterland, Hughes told the National Assembly that the schools without access or limited access to the internet should be allocated greater resources to afford children at equal opportunity at education.

“This will not happen by way of handouts but by affording them the opportunity of being appropriately qualified at the highest level in order to benefit from the local content framework which is being established,” Hughes reasoned. Government, as part of its multibillion-dollar budget, has allocated $74.4B for the country’s Education Sector.

Minister of Education, Priya Manickchand, who had presented days ahead of Hughes, had assured the nation that new and existing programmes and policies would be developed to aid in education recovery. Acknowledging that there has been significant learning loss as a result of the COVID-19 pandemic, Minister Manickchand said the Education Ministry, in 2022, will finance extra lessons for all students through the expansion of the Guyana Learning Channel and ICT classrooms.

Like Dr. Singh, Minister Manickchand also boasted about the intended distribution of 11,000 tablets and flash drives, noting that they would be a great asset for the teachers and children who lack internet connectivity.

E-GOVERNMENT
Meanwhile, in turning her attention to E-Government, the former Public Telecommunications Minister, who served under the David Granger Administration, said she is proud of the rich legacy and foundation left in place to facilitate the expansion of Guyana’s digital economy in four (4) years. Hughes recalled that it was the APNU+AFC Administration which had operationalised the e-government fibre network in 2015, though it was built by the Chinese in 2014.

“Mr. Speaker it was through the use of this cable that we provided secure, reliable internet access to 116 government agencies with state-of-the-art video conferencing facilities and created 79 access points. Free internet connections to over 250 schools, access to the internet at 173 hubs in communities from Orealla, to Aranaputa where the women could take orders online for their fine peanut butter, to locations in Berbice, demerara and along the Essequibo coast,” the APNU+AFC MP boasted. It was argued that when the COVID-19 pandemic hit Guyana in 2020, the country, being at an advantage, had the opportunity to expand its infrastructure but little was done after the PPP/C took office in August, 2020. Hughes said instead, it is back to business as usual, with government towers being used to facilitate the expansion of a private network which more than likely will result in Government having to buy connectivity in years to come.

“An expanded government owned network is how you would be able to provide free internet to depressed communities, portable Wi-Fi devices that our children along with a laptop that our children could be issued along with those text books with that ensures we have an educated generation who can fill the positions of the Guyana of the future. None of these innovative programmes have been implemented. None of these from the “we care” government,” she told the House.

TELECOMMUNICATIONS
Further, Hughes told the House that while the Government issued commencement orders bringing into full effect the Telecommunications Amendment Act (2016) thereby ending the 20-year monopoly held by Guyana Telephone and Telegraph Company (GTT), it is unclear whether a settlement had been reached. “Was a final settlement agreement concluded between the Government of Guyana and ATN/GTT? If no, has GTT/ATNI withdrawn its claims to be compensated for the ending of their monopoly? If yes, what was the settlement date?” are among the questions Hughes want answered.

“Mr. Speaker we are talking about figures that ranged in the vicinity of $29.4B at a minimum,” she noted while emphasising that Guyanese must be informed of the investment rights, tax credits, spectrum assignment and fees surrounding this issue.

Sun Feb 6 , 2022
Support Village Voice News With a Donation of Your Choice. In observance of World Cancer Day, which was observed on February 4th under the theme ‘Closing the Care Gap’, GTT has donated $4M from its Pinktober funds to the Cancer Institute of Guyana, for cancer screening, diagnosis and treatment. In a press release the company said its Pinktober Coordinator, Diana […] 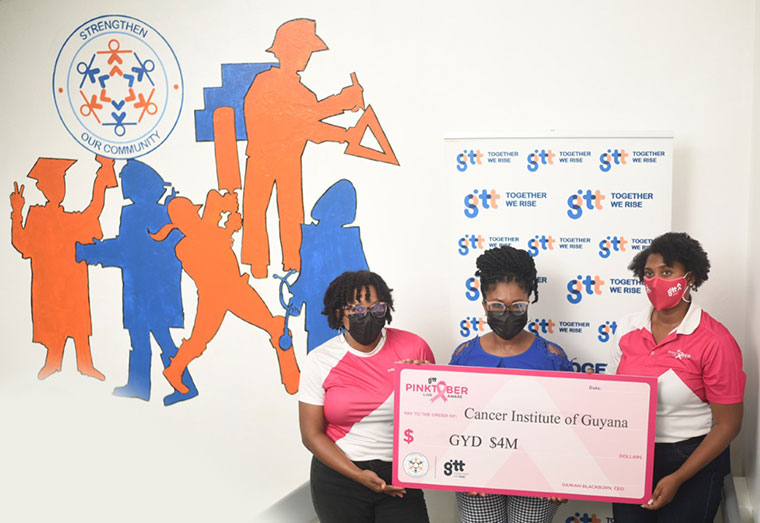