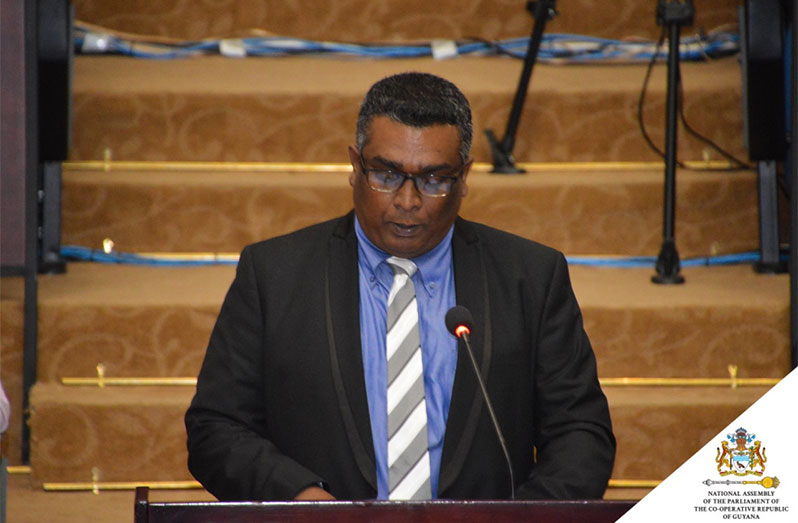 —increases allocations to all regions it controls- MP Mahipaul says

Opposition Member of Parliament Ganesh Mahipaul said instead of fostering “One Guyana,” the People’s Progressive Party/Civic (PPP/C) Administration continues to sow seeds of discord. Such he said is reflective in the $552.9B National Budget, in which PPP/C controlled Regions have been given notable increases while Region 4 – which accounts for almost half of the country’s population – sees a decrease in allocations.
“For Region 1, a PPP controlled region, the allocation to that RDC under line item 6211 increased from $45M in 2021 to $53M in 2022. For Region 2, another PPP controlled Region from $16M to $20M. Region 3, another PPP controlled region from $12M to $14M. Region 4, the most populated region in this country with almost half of the country’s population was allocated a decrease from their last year number. From $21M to $18M,” MP Mahipaul said as the Budgetary Debates continued in the National Assembly on Monday.
Region 4 is an Opposition controlled district. The A Partnership for National Unity + Alliance For Change (APNU+AFC) Parliamentarian told the House that restricting the ability of the elected Council of Region 4 will not achieve “One Guyana.”

He said the actions of the Irfaan Ali Administration is “disgraceful” if not “wicked.” He told the House too that the allocations for Region 4 do not reflect the will of the people. It was explained that though the budget circular was issued in July, 2021, it was not until September, 2021 that the it was submitted to the Region 4 Regional Democratic Council by the Regional Executive Officer (REO), Donald Gajraj. “That REO created and proposed the Region 4 budget completely outside of the knowledge of the elected councilors of that Region. To this day the Chairman and Councilors do not know and was never a part of the proposal from the region. Is that not a clear definition of dictatorship Comrade Speaker?” MP Mahipaul told the House.
Alluding to Article 148 of the Constitution, which guarantees Guyanese the right of freedom of assembly and association, the A Partnership for National Unity + Alliance For Change (APNU+AFC) told the House that contrary to the Constitution, Guyanese, who are not in the support of the Government, are being ostracised.
“Double-standard, dictatorial, devious, diabolical, dangerous and because we don’t care is what is fitting to describe in accordance with Parliamentary acceptable terms, this regime’s behaviour towards the people of this country,” MP Mahipaul said.

He further pointed out that subventions to Local Authorities under Line Item 6313 have been reduced to zero in 2022 from a high of $207.8M in 2021. Though acknowledging that the capital subvention has increased from $551M to $714M, the APNU+AFC MP expressed concern that over the past two years, the Government, through the Ministry of Local Government and Regional Development, has been dictating the work of the local organs, and in doing so, mandating that they spend their subventions on streetlights and crush and run.
“It was like a racket sir, one of the streetlights costed the taxpayers $35000 in total and your cell phone light is brighter. We are talking about one Guyana sir. A Guyana where the installed cabal violates the constitution, victimizes the elected officials of the RDCs, NDCs and Municipalities and vilifies the people who stand up against their notorious behaviour. That is the One Guyana this regime is talking about,” MP Mahipaul told the House.

Turning his attention to the measures proposed in the 2022 National Budget, the Opposition MP called on the Government to increase the income tax threshold to $125,000 and not $75,000. Currently the income tax threshold is $65,000 and will be increased by $75,000. “Having it at a meager $75 000 is a because we don’t care approach. The poor and the vulnerable are the ones that must be considered in Budget 2022,” he posited.
Further, he recommended that the old age pension be immediately increased to $50 000, and not $28,000 as proposed by the Government; and public assistance for the vulnerable to $40 000 and not $14,000 as proposed. MP Mahipaul also called for the enhancement of all the technical and vocational training centers across the country.
He said while the budget, on paper, places significant focus on infrastructure and agriculture, those developments are at risk of corruption as he pointed to flood relief grants, for which many farmers are still to receive. “If this regime really and truly wanted to consider the ordinary Guyanese people them they would increase the income tax threshold, decreased the income tax rate,” he lamented. He said Guyana deserved a budget that would cater and charter a course for all Guyanese out of the poverty.

Mon Jan 31 , 2022
Support Village Voice News With a Donation of Your Choice. …say aim is to restore confidence in the economy In defense of the $552.9B National Budget proposed by the Irfaan Ali Administration, Minister within the Ministry of Local Government and Regional Development, Anand Persaud said the programmes, projects and measures contained therein are intended to restore Guyanese confidence in the […] 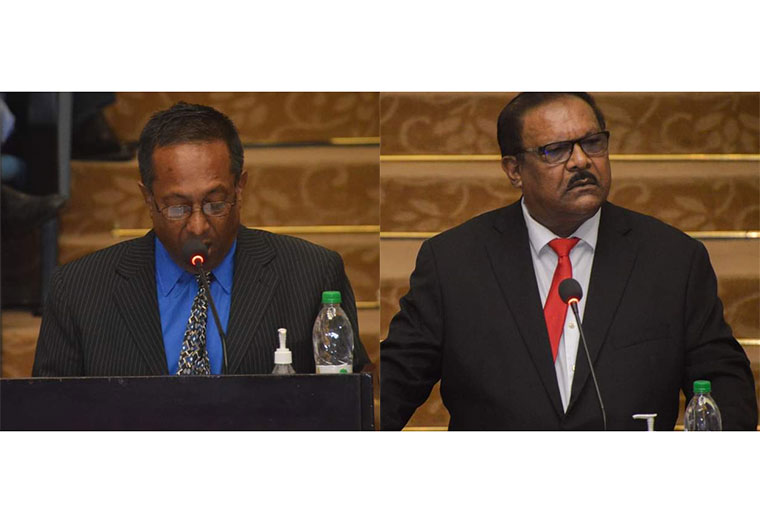