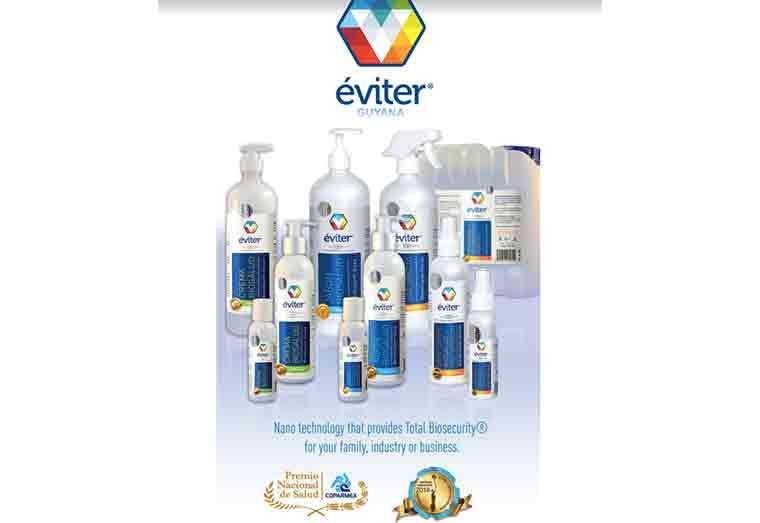 …protects against the coronavirus and more
…distributor in talks with Ministry of Health, private sector for use in public buildings, schools, businesses

As a first for Guyana, a new group of products is being introduced to the country in the fight against COVID-19 that intends to improve protection and sanitization against the coronavirus for much longer than the commonly used alcohol-based sanitizers.

There are plans in place to introduce these products to the Ministry of Health for use in schools and public buildings, along with the public’s ability to purchase from supermarkets and stores.

They detailed that the active ingredient in the Eviter line of products was developed in Mexico by biochemical engineer Gabriela Leon who is also the CEO of Gresmex and Nanomax. Through research in nanotechnology, the manufacturer — Nanomax — developed and patented
in over 100 countries what is being deemed as one of the most advanced antiseptics and disinfectants in the world.

SAVES MONEY, PRODUCT AND TIME
The Eviter surface sanitizer protects surfaces from viruses [including Sars-Cov-2], germs, bacteria, fungi and more for up to 72 hours with just one application. Meanwhile, the Eviter hand soap offers the same protection for hands for up to 12 hours.

“It’s another strong weapon in the fight against COVID-19,” Cole said. “First of its kind for Guyana… there’s nothing else remotely close to providing this service in Guyana.”

Nbelyax, the active ingredient in Eviter products, has won some of the most prestigious awards in its field. Questioning whether the products have any side effects, the Village Voice News was told that different toxicity tests have shown that Nbelyax acts only on the
DNA or RNA of pathogens; does not harm healthy cells, human DNA, skin or mucus membrane; is non-corrosive and biodegradable and does not allow microbial resistance.

He said that the products are also better than chemical-based sanitizers which have been advised against for use as hand sanitizers by global health authorities because they can be absorbed by the skin and can harm the environment.

“This product is safe for use, it won’t cause any harm to the environment and it is 100 percent effective,” Dr. Raghuram said.

Giving an example, he said that after one meeting, a company wouldn’t need to re-sanitize the meeting area for up to three days and can simply give new attendees the hand sanitizer which would protect them for up to 12 hours. He noted that this would save public
buildings and businesses the cost of purchasing large quantities of alcohol-based sanitizers to frequently sanitize areas.

Sankar said: “Even though the price might seem higher than the green [sanitizing sprays] or Lysol, because of the fact that you do not have to spray over and over and over, you’re actually using one of these [Eviter] sprays that would be equivalent to five bottles
of the other stuff. Because of that, it actually works out far cheaper.”

The Eviter sanitizers can be used in working areas and on electronic devices, in the home, in schools and any other place with a gathering of people.

PRIVATE AND PUBLIC SECTOR INTEREST
Cole said that Azul Distributors Inc. has secured the distributorship rights to import and distribute the Eviter line of products to the Guyana market. He also noted that the products were approved locally by the Government Analyst Food and Drug Department (GA-FDD).

The Village Voice News questioned whether there have been efforts to approach the Ministry of Health with the product, given the Ministry’s interest in protecting citizens from the virus. Sankar assured that this is being done.

“We’re working with the Ministry of Health because Guyana is on a Tier Four and schools, they’ve been saying that they’re reopening but some of them have been closing and kids are not going to school. So, that is one of the main focuses. We’ve already been in talks
with them and they’re just waiting on the product which comes next week and they will buy from us. The schools as well as the Ministry of Health, we’re working with them, hospitals also,” he said.

There are also ongoing talks with the Private Sector Commission (PSC) and the Georgetown Chamber of Commerce and Industry (GCCI) for possible collaboration to provide the products to the business community.

Meanwhile, Azul Distributors Inc. is currently building its local office at 43 Garnett Street from which they will soon operate, working to package the products for use in Guyana. The company will also offer disinfectant related facemasks, creams and wipes.

Sun Oct 24 , 2021
Support Village Voice News With a Donation of Your Choice. Dear Editor, I note a public announcement in the media that roads will be closed off next Thursday to facilitate the electronic lighting of a symbolic diya. Is this done to appease Hindus? If government is trying to send a message not to worry about their being sidelined while other […]