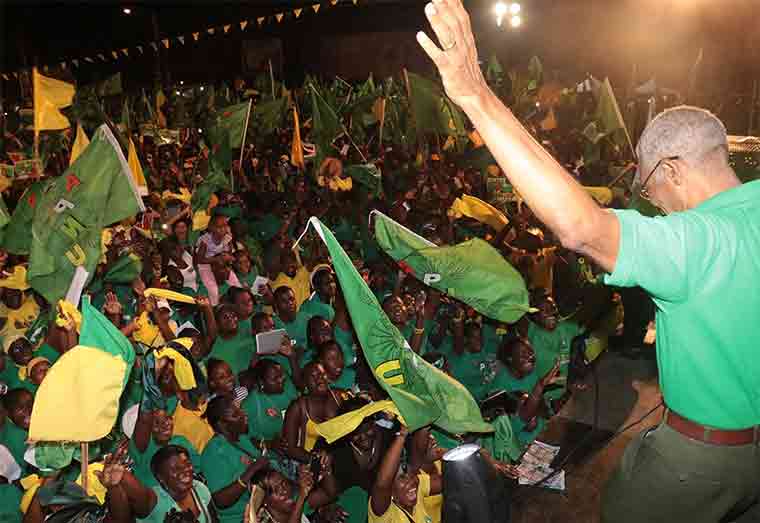 Leader of the People’s National Congress Reform, David Granger has written the Central Executive Committee warning against the holding of the party’s congress this year, citing the risks associated with the Covid-19 Pandemic and the challenges to put in place the necessary logistics.

Granger also red-flagged key members of the executive, saying that they should not play any part in the accreditation of delegates and nominated General Secretary, Amna Ally as the congress administrator. Giving reasons for objecting to the men, Granger accused them of being biases even as he cited their alleged participation in meetings which resulted in no-confidence motions being passed against him. Among the executives Granger red-flagged are: Aubrey Norton, Dr Richard Van-West Charles; Mortimer Mingo and Winston Felix.

Sources at Congress Place told this newspaper that all of the men Granger objected to responded to him, defending their attendance at the meetings he referred to. Village Voice News was told that one of the men even went as far as questioning Granger’s “moral authority to speak on matters of conflict of interest and bias.” “One of the men told him that he was the one who made the rules and set the criteria for the candidates to contest for the leadership in 2010 and yet he was one of the candidates.” Back in 2010, the PNCR had held primaries to its presidential candidate for the 2011 elections, during which Granger, Carl Greenidge; Basil Williams; James Bond and the late Dr. Faith Harding participated. Granger went on to win the nomination by nine votes against his nearest rival Greenidge. He would later win the leadership of the party.

Back in September, party Chairman, Volda Lawrence at a news conference announced that it will be holding its Congress not later than December 13 this year. However, it would seem that Granger did not support this. Lawrence did say that the time-frame for the holding of congress was a consensus among the more than 20 members of the Central Executive who attended their meeting. She said the “leadership structures” in Guyana and in the Diaspora would have to ensure that the process is conducted in a smooth and transparent manner. She was certain that the logistics committee would prepare all voting stations to guarantee a free and fair poll for the election of a Leader, Chairman, Vice Chairman and members of the Central Executive.

Lawrence had said: “the Peoples National Congress Reform wishes to inform its members and the Guyanese public, here and abroad, that the Party’s Central Executive Committee at its most recent meeting held yesterday Thursday 16th September 2021, approved the recommendations for the holding of the Party’s 22nd Biennial Congress by the end of November 2021, but not later than 13th December 2021. The consideration for this period is linked to the Thanksgiving weekend in the USA which is a special occasion for our members living in the United States. The Congress will be for delegates only, decentralised, and hybrid. It will be conducted over one day at Party Congress Houses in the respective regions.”

Meanwhile, in subsequent exchanges in response to Granger’s letter, one executive member who supported the leader’s position said there was a real possibility of the government sending the army to break up the congress owing to the large gathering in defiance of the Covid protocols. In the exchanges, Ally’s impartiality was also questioned, with one member asking rhetorically “if comrades Norton and others are bias then what about Amna Ally…she went to Linden and said very disparaging things about senior members of the party.”

Public interest in the PNCR Congress is high following the coalition’s defeat at the March 2020 elections. Sicne then the party has been in the throes of a leadership crisis. Several executive and rank and file members have publicly criticised the leadership style of Granger and have even gotten party group to pass no confidence motions against him. Granger has since taken leave of absence, but according to insiders he is still very much in charge. Last Thursday Leader of the Opposition, Joseph Harmon launched his campaign for the leadership at an event held at the Herdmanston Lodge, Queenstown Georgetown. Norton and Dr Richard Van West Charles are among those who have also signalled their intentions to replace Granger as the leader of the party. There have been noises about current party Chairman, Volda Lawrence putting in her bid, but she has not confirmed this. For his part, Norton has been making the rounds on online talk shows, putting forward his plans for the party. A politician for 49 years, Political Scientist Aubrey Norton said he has what it takes to return the People’s National Congress/Reform (PNC/R) and its coalition partners back to Government.
“Once the Congress of the People’s National Congress Reform is called, I intend to run for the leadership of the party,” Norton had told this newspaper in a previous interview.

Norton said the institutional knowledge acquired together with the political skills developed over the last 49 years makes him an exception candidate for the leadership of the PNC/R. “I know the party inside out; I have worked in every region of this country for the People’s National Congress, and later the People’s National Congress/Reform, and what that means is that I have institutional memory, I have [a] relationship [with members] across the party and in large measure I know some of the problems within the party that we need to solve,” Norton told this newspaper. He added: “I also believe that academically, I am equipped to do the job; at the same time, I also believe that I am in contact with the grassroots of the party, and I have always been in contact with them, and I think that will also help me to standout.”

Mon Oct 25 , 2021
Support Village Voice News With a Donation of Your Choice. Dutch maritime solutions provider, Koole Contractors has begun a wreckage removal project in the Demerara River. They were hired by the Maritime Administration Department (MARAD) to remove three separate wreckages, the Department of Public Information has said. The $787.6 million contract was signed early last month between Director General at […]