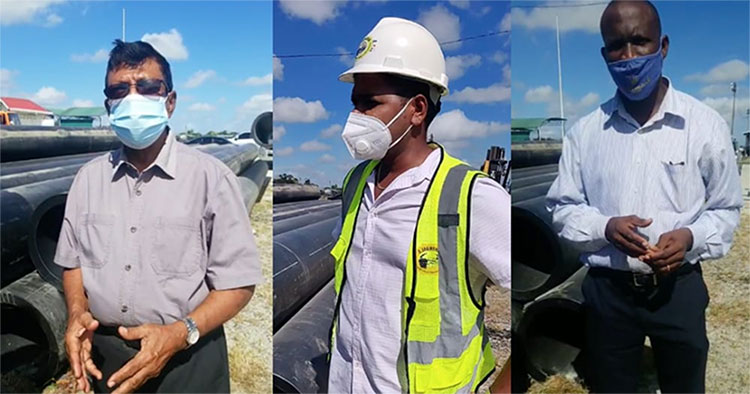 As part of its ongoing efforts to upgrade Georgetown’s age-old water transmission lines, the Guyana Water Inc. (GWI) has commenced the over $200M Cemetry Road Transmission Project from the Square of the Revolution to Cemetry Road.

He said that the cast iron pipes currently facilitating the system in the majority of Georgetown are no longer reliable and are long overdue replacements. Aware of this, Baksh said that the Government, through GWI, has been investing in an overhaul of the pipes in manageable phases.

“In an effort to remedy the situation, the Government of Guyana has been making huge investments. Last year, over $200 million was spent on the town’s transmission upgrade programme and this year we’ll commence this one here…and this will cost over $200M also.”

Works for the project will take place along Hadfield, Chapel and Princess Streets and Cemetry Road. It is hoped that it will all be completed before the end of the year.

Executive Director for Projects at GWI, Aubrey Roberts notified the media that route via Chapel Street was chosen because there is less traffic disturbance as compared to Vlissengen Road. Citizens can expect excavation activity and one lane of the traffic to be diverted on roads where necessary.

Awarded the contract is S. Jagmohan Hardware Supplies and Construction Services (SJHS&CS). Jagmohan said that he does not foresee any major challenges with the project and expects to complete the same within the timeframe given.

Meanwhile, Baksh said that such incremental work will continue in Georgetown for several years to come. For 2022, inclusions are already been made in GWI’s budget for $400M worth of new pipelines to continue the project.

He noted: “We are hoping to get a huge investment because to replace all the old transmission lines it costs an excess of US $35M and the Government is committed to replacing these pipelines and has already, through using budgetary resources, started the works.”

The improvement is set to bring about a positive change in some 70 percent of non-revenue water lost in Georgetown which has been taking a financial toll on GWI.

Thu Sep 30 , 2021
Support Village Voice News With a Donation of Your Choice. Non-resident Ambassador of Japan to Guyana and Trinidad and Tobago, Tatsuo Hirayama has signalled his country’s interest to invest additionally in Guyana in the areas of renewable energy, agriculture, COVID-19 and more during his visit to the country. Already, the Ambassador has had separate meetings with President Irfaan Ali; Minister […]