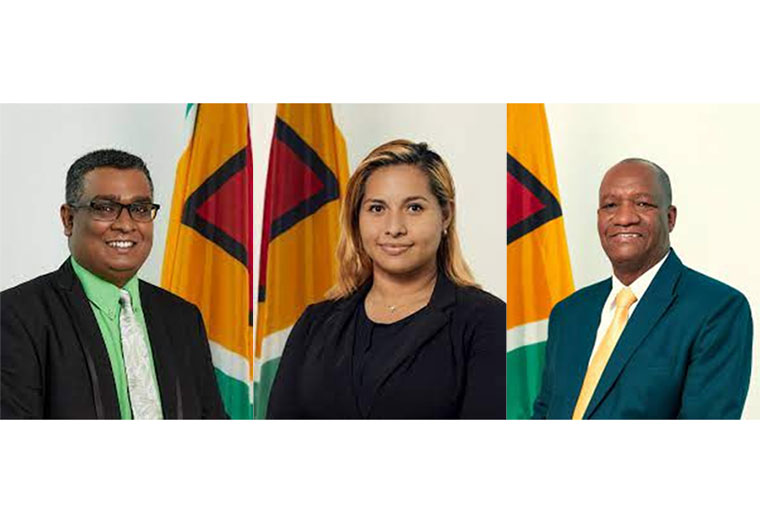 By Svetlana Marshall
Leader of the Opposition, Joseph Harmon said the A Partnership for National Unity + Alliance For Change (APNU+AFC) is considering the instituting legal proceedings against the Government over its abuse of the Contingency Fund.
His statement comes two days after the Senior Minister within the Office of the President with responsibility for Finance, Dr. Ashni Singh submitted two additional Financial Papers totaling more than $26B to the National Assembly for approval. Of the $26B, $5.1B was utilised from the Contingency Fund during the period July, 22, 2021 to December 9, 2021 while $21.4B covers supplementary provision being sought.
During a virtual press conference on Wednesday, the Opposition Leader said the Government is seeking approval for additional funds some six months after it “secretly swiped” $21B from the Contingency Fund – just three and a half months after the 2021 Budget totaling $383B was approved by the National Assembly. He said similar actions were taken by the Government in December, just days before 2020 came to an end.
Harmon explained that while Article 220 (1) of the Constitution and Section 41 of the Fiscal Management and Accountability Act empower the Minister responsible for Finance to make advances from the Contingency Fund, he or she must be satisfied that the funds will be used for urgent, unavoidable and unforeseen events.

He said while advances taken to help combat the COVID-19 pandemic may be considered urgent and unforeseen, the majority of funds were squandered by the Government.
“$3.9B was taken out of the Contingency Fund for one off cash grant to sugar workers, out of crop support for GuySuCo and operational expense for NDIA. Nothing was stated under this line item to justify the urgent and unforeseen circumstance that requiredDrAshni Singh to go into the contingency fund. The PPP found urgency in paying this money to GUYSUCO while sims of money in the budget couldhave facilitated a much larger increase than 7% for public servants is unconscionable,” the Opposition Leader pointed out.
In the case of the $21.4B in supplementary provision being sought, Harmon said the Government after budgeting $2B for electricity charges in 2021, has returned to the House for an additional $4B – a 3291% increase from what wasbudgeted in 2019.

“Now they have returnedrequesting $4billion dollars. Has the Ministry takenover all Government arrears to GPL? Will they comeagain for more?”
He added: “The question that is therefore left unanswered when one looks at financial paper No.3/2021 is can any reasonableMinister responsible for finance honestly say that all of the monies taken from the contingency fund during this period fit the criteria set out by our constitution and the FMAA. We certainly have quite a few questions about the sum of the funds that were taken out of the consolidated fund during this period.”He said based on the pattern exhibit, one can safely conclude that the Government is “extremely poor at budgeting.”
APNU+AFC Member of Parliament, Ganesh Mahipaul pointed to the $265M allocated to the Guyana Lands and Surveys Commission for operational expenses. The sum allocated is significantly higher than the subventions allocated to the Commission in 2018, 2019 and 2020 which amounted to $107.5M, $150M and $150 respectively. He said similarly, in the 2021 budget $150M was approved by the National Assembly.
“So for 2021, the Guyana Lands and Survey has gotten a total of $415,025,850, that’s a significant increase when you compare it to 2018, 2019 and 2020. So something is happening at the Guyana Lands and Survey Commission… and I think it is fitting for the Government to inform this nation what is going on at the Guyana Lands and Survey Commission,” Mahipaul reasoned.
Weighing in on the matter, APNU+AFC MP Juretha Fernandes said when the all the financial papers are taken into consideration, the actual budget figure of 2021 to a whopping $433B.

“And with $433B the public servants of this country are left with a 7% taxable increase coupled with an increase upwards of 14% in basic food items. All this after the PPP administration made numerous statements of budgeting $10B dollars for the increase of public servants salary. Not even half of that was actually used to for the 7% that public servants will be facing today when they go to the banks and struggle to budget for their families to have a seemingly decent Christmas. The failure to adequately pay public servants an increase when the Administration is spending $433B is unjustifiable,” she told reporters.
Asked what the Opposition is prepared to do to keep the Government accountable, Harmon disclosed that Attorneys within the Coalition met on Tuesday, and discussed the various recourse that can be taken.

“The attorneys that are on the team itself, they are basically looking at what action could be taken and to provide us with an opinion but it is their opinion that there is a clear possibility that action can be taken once the exercise of this discretion is tainted by improper purpose,” the Opposition Leader said.
He said in moving forward, the Coalition before Thursday’s sitting with meet with Deputy Speaker and Leader of the Liberty and Justice Party (LJP) to share its position on the Financial Papers submitted.
“I am heartened by the fact that he now seems to have found his opposition voice and recognizes the side of the aisle on which he sits. And so I would definitely share our concerns, our statements with Mr. Shuman so he could also be of liked mind when we go into the Parliament.”

Thu Dec 16 , 2021
Support Village Voice News With a Donation of Your Choice. Ahead of today’s Sitting of the National Assembly, the main opposition – the A Partnership for National Unity + Alliance For Change (APNU+AFC) – has accused the Speaker, Manzoor Nadir, of blocking scrutiny of Government’s spending during the consideration of Financial Papers totaling billions of dollars. Today, the Assembly is […]