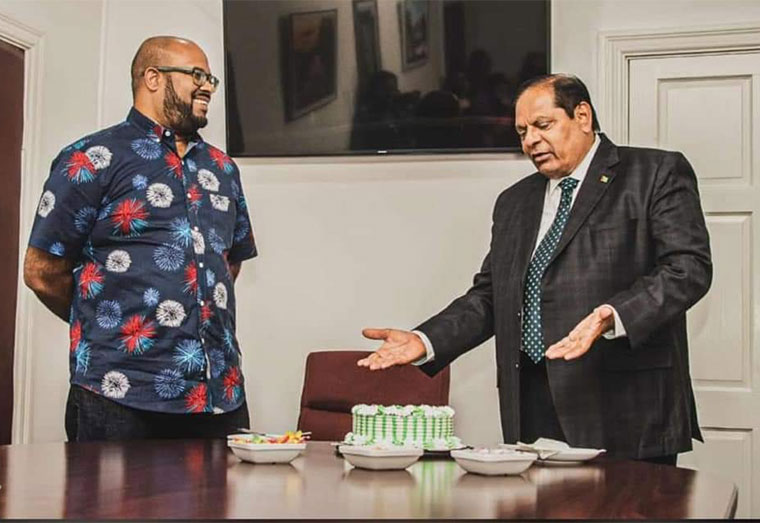 ...Imran Khan hailed as fighter for a better Guyana

Friends and colleagues of Imran Khan, the former Director of Public Information who died from Covid-19 Tuesday morning expressed shock at his passing, even as they urge responsible behaviour during this deadly pandemic.
Khan succumbed to the virus early Tuesday morning: a few days earlier he had struck a very hopeful tone in Facebook messages.

“It is hard to believe much less accept that Imran Khan has died. Guyana has lost a brilliant light, snuffed out by the covid killer disease. Our hope is that his wife Tamara will pull through.
This is indeed the dark time for all of us who have known and loved Imran,” former Prime Minister Moses Nagamootoo wrote on his Facebook page.

For his part, Leader of the Opposition, Joseph Harmon expressed similar sentiments. “It is with a heavy heart that I write on my own behalf and that of the APNU-AFC coalition to announce the untimely death of our friend and colleague Imran Khan who served as Communications Director in the office of the Leader of the Opposition up to today,” Harmon said in a statement.
“To his wife, Tamara, and other family members we offer our deepest condolences and regret.” Harmon, added: “When we read his upbeat note on Sunday asking for a fruit salad and praising coconut water we assumed he had passed the worst and was well on the way to recovery. The suddenness of his death some hours later attributed to acute respiratory failure has been a terrible shock to us all.”
“Imran was a passionate member of the coalition at the helm of public information. He was a Guyanese who believed that all Guyanese deserved a just and good life and used all his efforts to ensure that access to information underpinned that right. When he returned from his life in Antigua to join the coalition through the AFC he came with eagerness and an energy that was exemplary. Our grief is profound. Guyana has lost a true son.”

Former BBC broadcaster, Orin Gordon wrote on his Facebook: “On Friday night, Imran made a plaintive cry in a Facebook post. He was in a mighty struggle, called out to God, and said he couldn’t fight it alone. I left him a WhatsApp voice note just after midnight. We texted briefly. He was bullish about beating it. “Thank you, I am eternally grateful”, was the last thing he said to me at 2.24am Saturday morning. He posted on Sunday thanking everyone for the outpouring of love, but I couldn’t reach him after that.

Imran, the media czar in the previous Guyana government, was an outstanding communications chief for what was then the West Indies Cricket Board, and delivered many a hard-to-get interview to me.

He would say, on the passing of someone, “walk good.” He liked to call people “comrade.” So walk good, comrade.”

Veteran journalist, Enrico woolford said he woke up Tuesday morning to the devastating report of the death of Former Director of Information in Guyana Imran Khan. He succumbed to that dreaded virus Covid-19.  His passing is such a shock although we all knew he was fighting Covid.

“Imran Khan was such a fighter. A fighter for the working class, for principles and ideals, for the development of the Guyanese society.  A believer in freedom of the press and the expansion  of communication throughout Guyana. I am grateful for his support for the communication sector from Cricket to Communities in regions all across Guyana.  He was instrumental in the formulation of National Communication Policies that saw the expansion of Radio and TV facilities from Aishalton to Anna Regina, from Orealla to Madhia,” Woolford wrote on his Facebook page.

He added: “Imran was very supportive during my brief tenure as Chair and CEO of NCN. He was always respectful of my knowledge of the sector.

To Tammy, his ever supportive and charming wife, his mother, his other family members,  friends and colleagues my deepest sympathy.”

Member of Parliament and former chairperson of the GNNL, Juretha Fernandes  said she had known Imran Khan from her very first day in central politics. “And I had the opportunity of working with him when I worked at the Office of the Prime Minister. Imran was known as someone to speak his mind no matter what, even if he was the only one with that opinion. He stood his ground at all times. If he didn’t like something I said or had done, he wasted no time to tell me. That was the character of Mr. Khan, very strong willed in his conviction. I learned a lot from Imran Khan about politics and about life. Those lessons I will take with me throughout life.”

Georgetown Mayor, Ubraj Narine in his tribute said it was shocking and heartbreaking to learn of the passing of Mr. Imran Khan, a friend, close colleague and comrade.

“My prayers are with his Wife, family and loved ones at this very difficult time.”
The mayor implores all who would wish to comment, please don’t speculate and insinuate that some wrong doing was at play regarding his death at the COVID19 hospital.
“Please keep in mind that health sectors around the world are under strain and Guyana is no different. There is global shortage of ventilators and PPEs and as such our healthcare professionals are trying their best with what they have, at their disposal.”

Narine said it is with a heavy heart that we all learnt of the passing of Mr Khan, but at the same time let us not lose our humanity and level accusations against an institution and the people who work there, to care for and protect us from COVID19.

“I implore you, members of the public, to take the vaccine; it’s the best option we have right now to fight COVID19. I stand with you against mandatory vaccines but at the same time if you have no underlying medical conditions preventing same from being administered, I advise that you take the vaccine, please.

COVID19 is real and with this passing of a friend and comrade, it really hits close to home.
My prayers are with his family and loved ones during this difficult period.  Please stay safe Guyana.”

He was difficult. An enigma wrapped in a mystery. I hated him and loved him all at once. We all loved him in our own way.

And personally, I think he made me a better person professionally. And I’m thankful we had him with us as long as we did,” Duncan wrote.

Khan’s wife, Tamara Khan has also contracted the virus and is said to be recovering at home.
Khan had appeared to be in good spirits last week, when he wrote on his Facebook encouraging persons to help him fight the disease as he was lonely.
“By the grace and strength of God I am still fighting this but it is getting lonely. I need more help and support. Please help me fight more. I can’t do this alone. Thank you,” Khan wrote last week.
He followed up later: ” Thank you for all your love, prayers, messages of encouragement and support. I am overwhelmed beyond explanation and I am in excellent spirits. Difficult to respond individually to everyone but in time I will.

Please be assured that I am fighting and there is no giving up.

In a lighter note he wrote,: And now for the most important part…

Good thing is I am getting decent amounts of coconut water. Now if only some ingenious person  can find a way to smuggle cut up apples, pinapples, grapes, watermelon and bananas to me I’d walk out of here in 5 mins. And I’d literally walk all the way home. Throw in some mango and I’d run.”

Khan had told friends he was extremely careful regarding the virus, conducting most of his activities virtually. He believes he contracted the virus recently when he stepped out to attend a meeting. He said he later found out the person he sat next to had contacted the virus.

Tue Sep 28 , 2021
Support Village Voice News With a Donation of Your Choice. The Alliance For Change said it regrets the passing of one of its finest members  Imran Khan. Imran was committed member of the AFC and later the APNU+AFC coalition who epitomised some exceptional qualities – youth, commitment, enthusiasm and resistance, the AFC said in a statement. Khan died Tuesday morning […] 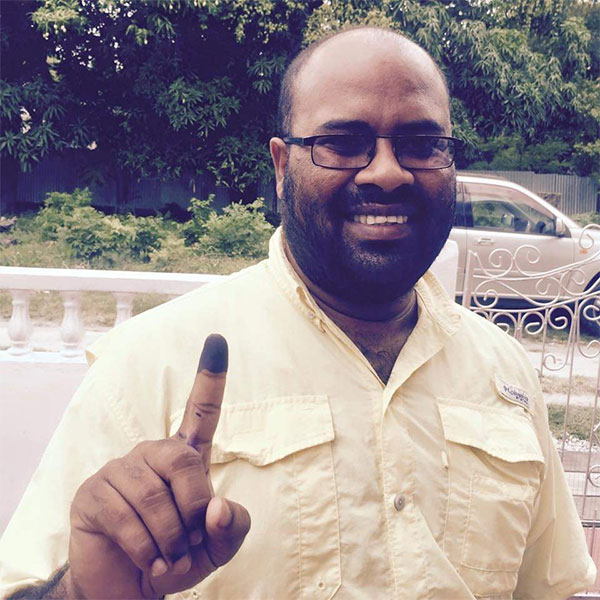