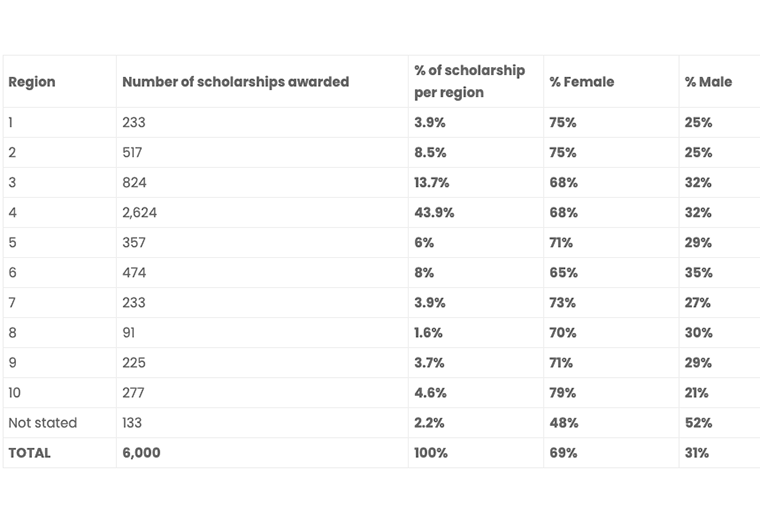 Of the 6,000 scholarships awarded through the Guyana Online Academy of Learning (GOAL), most awardees were interested in acquiring certification in Food and Nutrition, Psychology, Public Policy and Administration and Special Education.

Through the Government initiative, the Ministry of Public Service has presented online and distance learning (ODL) scholarships to people from across the ten Administrative regions with a representation of 69 percent females and 31 percent males.

Also, 1,436 applicants, who only attained Caribbean Secondary Education Certificate (CSEC) subjects, were awarded six-month scholarships at JAIN University. Upon successful completion of this programme, the applicants will be qualified for admissions into bachelor’s degree programmes in Business and Commerce.

According to GOAL’s Director, Professor Jacob Opadeyi: “We have Programme Managers assigned to each University that will provide ongoing support to the awardees as they navigate their way through the ODL.”

The GOAL team is also engaging with the awardees to facilitate a seamless registration process with their respective Universities. Classes for the vocational, professional, and educational (CPE) programmes offered by the UWI Open Campus have commenced, while start dates for the other institutions’ semesters will be announced shortly.

Although 6,000 scholarships were awarded, the GOAL team was unable to process 48 percent of the applications due to their failure to fill out mandatory information and submit copies of their qualifications as directed on the Application Forms.

As a result, only 7,619 of the 14,699 applications were vetted during the verification and, out of these, 1,617 did not have the relevant qualifications required. The vetting process is a key phase that determines the candidates’ eligibility to the universities of their choice.

In other cases, 5,946 applicants registered but did not submit their forms, while approximately 900 applications received were duplicates. Of the 7,619 applications received, an estimated 2,000 did not include the applicants’ Regions of residence, while approximately 1,100 did not include an email address. Another 700 did not provide any telephone contact information.

The 20,000 GOAL scholarship programme was conceptualized by President Irfaan Ali as part of his commitment to invest in human development through academic advancement.

The rollout application process for 2022 will be announced soon.

Sun Aug 22 , 2021
Support Village Voice News With a Donation of Your Choice. Leader of the Alliance For Change (AFC), Khemraj Ramjattan said while the Guyana Police Force has reported a decline in serious crimes, it is his suspicion that many crimes committed against foreigners and migrants have gone unreported. According to a statistical report released by the Guyana Police Force in the state’s […]