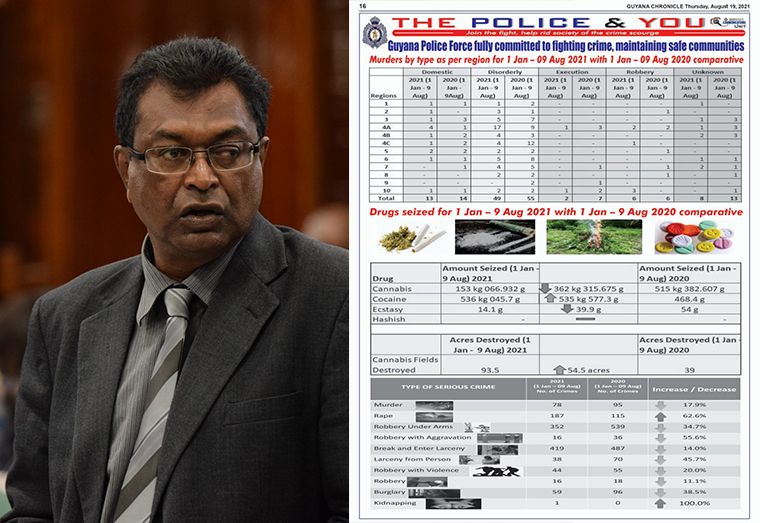 Leader of the Alliance For Change (AFC), Khemraj Ramjattan said while the Guyana Police Force has reported a decline in serious crimes, it is his suspicion that many crimes committed against foreigners and migrants have gone unreported. According to a statistical report released by the Guyana Police Force in the state’s newspaper (Guyana Chronicle), as of August 9, close to 80 persons were killed already for 2021 in Guyana. But while the number may appear alarming, the police said, when compared to the same period in 2020, serious crimes including murders, robberies, and trafficking of illicit drugs have declined with exception of rape.The comparative analysis presented by the Guyana Police Force covered the periods January 1-August 9, 2021 and January 1-August 9, 2020. According to that report, there were 78 murders as of August 9, resulting in a 17.9% reduction when compared to the same period in 2020, which had recorded 95 murders. Robbery under arms dropped by 34.7%, the police said, explaining that 539 armed robberies were recorded during the specified period, however, in 2021 the number of armed robberies dropped to 352. There were reportedly 16 robberies with aggravation this year when compared to 36 the year prior, and 419 cases of Break and Enter Larceny in 2021 when compared to 487 in 2020. According to the police, robberies with violence also decreased. For 2021 there were 44 such robberies for the specified period while in 2020 there were 55 such cases.In the area of drug trafficking, the Guyana Police Force said 536kg 045.7g of cocaine was seized in 2021 while 468.4g was seized in 2020. In the case of cannabis, the police reportedly seized 153kg 066.932g this year when compared to 515kg 382.607g last year. Last year, the police seized 54g of ecstasy, however, the amount seized dropped to 14.1g in 2021.   But while murders, robberies and trafficking of illicit drugs have declined, the police said there were 187 rape cases reported for 2021, 72 more cases when compared to the same period last year, which had recorded some 115 rape cases. There was reportedly one case of kidnapping for 2021 but none recorded in 2020. “I want to be fair to the Police and say that although I accord credibility to these figures, my instincts, because of the reality on the ground, are to treat them with skepticism. I believe that a lot of serious crimes are not being reported especially those committed against foreigners and the local Chinese and migrants now in Guyana. We see these on FaceBook almost daily,” Ramjattan told Village Voice News. The reportedly decline in serious crimes comes at a time when Guyanese and even those in the Private Sector continue to express concern about the “increasing” reports of crimes. Ramjattan, who served as the Minister of Public Security under the A Partnership for National Unity + Alliance For Change (APNU+AFC) Government, said while he believes many serious crimes have gone unreported, the current perception by the general populace may be as a result of heavy reporting on criminal activities. “The perception of more crime than there actually is arise from the heavy reporting of it in the papers, TV, and social media. Social media more than the others is impacting to increase that perception because every owner of a smartphone now become a crime reporter or a drugs bust correspondent. Bad things fill the news, and being sensational sells well,” he reasoned. 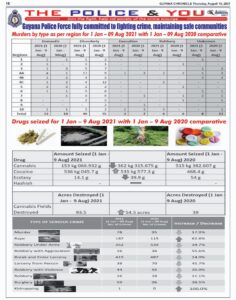 However, the AFC Leader said the police must do much more to enhance the public’s trust in the Guyana Police Force. He said the recent ‘cocaine bust’ which turned out to be false, has done significant damage to the Force’s credibility. Last week, the police were forced to release a man and a woman, after forensic tests done on a white substance found in 12 Fernleaf packets revealed that it was not cocaine as suspected by the Guyana Police Force but rather powder milk. “Well the Police has really gotten it bad now. Trust is becoming questionable,” Ramjattan said while noting that it was quite unfortunate that the police could not have distinguish milk powder from cocaine. “This is sad but like I said I will be skeptical of a lot of what is coming from them. They have forced me to when things like these happen,” he said. However, the former Public Security Minister said while crime will not halt in Guyana, it could be contained once the requisite steps are taken by the Guyana Police Force. “Crimes will certainly be contained, one cannot expect it to be halted, if more patrols at all levels are carried out, and when more effective intelligence is employed. Sometimes you have to dish out monies to informants to get the intelligence. This requires professionalism afterwards in setting up the operations to catch them in the act. Criminals will be deterred if they feel they will be caught,” he reasoned.Ramjattan also underscored the importance of using technology to fight crime. He said the Smart City Project developed under the APNU+AFC Administration should be expanded, and greater attention should be given to at risk youths. “Other things to be employed will be technology like the expansion of the Smart City project and the lighting up of those areas where there is a high density. Plus, as I did, those at risk youth who are identified by community leaders must be put into skills training. We ensured that up to 2019 about 4,000 were trained. This has to continue and I hope Minister [Robeson] Benn will find the monies for this,” Ramjattan said.However, he warned against political inference. The Irfaan Ali Administration in recent months have come under heavy criticism over claims of political interference in the Police Service Commission and the Guyana Police Force. A revelation in the National Assembly that the Government was unknowingly establishing Regional Joint Support Teams across the country has further compounded the situation, with security experts contending that the Constitution does provide for the establishment of such units. “The control freaks now in Government have gone one mile further now to create Regional Security Forces coming under the disguised command of the Defence Board, but which truly is commandeered by the politicos from Freedom House. I am on record as stating that this is wholly unconstitutional and it certainly is. To this date the reporting hierarchy of these Forces, and how the $700M allocated last Budget is being spent, and on what and by whom we have not got answers to. We are going to see as a consequence from this the demolarisation of our regular GPF. And especially the big boys in the criminal world once again making hay while the sunshine,” Ramjattan said.Though he suspended the Police Service Commission following allegations that he attempted to influence the promotion of senior police officers in the Force, President Ali has denied all claims of political interference. He said the State is doing its best to fight crime. 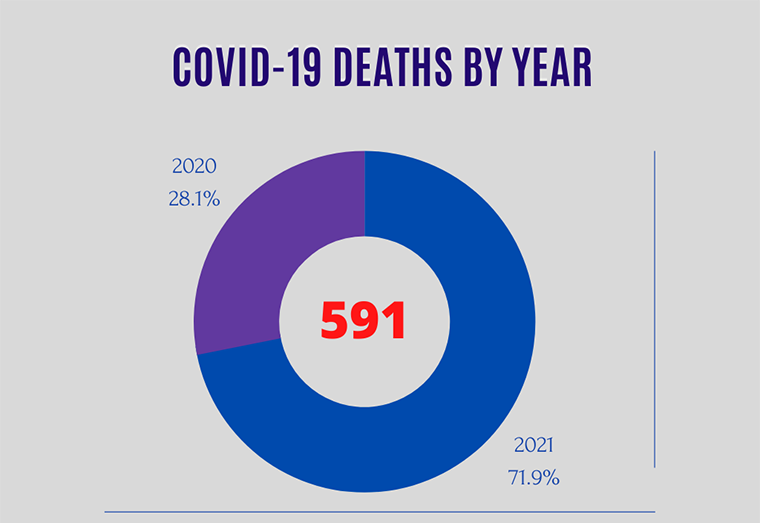