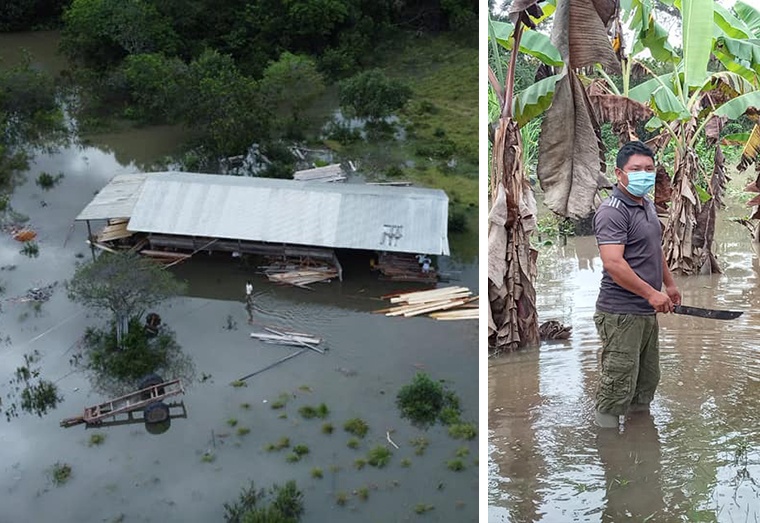 Villages in Region Nine are living in fear that should the flood situation worsen, not only will their food and financial security be affected for an extended period, but their fight against the deadly coronavirus will be made much more difficult.

As of June 5, Regional Health Officer of Region Nine, Dr. Naail Uthman told the newspaper that there were 289 active cases across the Region with Rewa, Apoteri, Katoonarib and St Ignatius with the highest number of cases.

Meanwhile, to get an assessment of the direct impact of the flooding there, the Village Voice News reached out to Toshao of Aishalton, Michael Thomas. He provided the grim picture of some 70 farms and counting recorded as affected.

Aishalton, located in the Deep South Rupununi, and several surrounding villages have been affected by heavy rainfall, the flooding of a number of creeks and the flooding of the Rupununi River.

Thomas explained that the accumulation of water on the soil at farms is destroying cassava and other crops. “We have a lot more farms that we haven’t verified as yet,” he said.

“Because of so much of rainfall it will be hard for the farmers to work out the cassava so it will affect our food security for the next three months because we are just mid-way through the rainy season and so much of damage has been caused by the intense rainfall.”

Furthermore, while some residents have received flood relief assistance from the Civil Defense Commission (CDC) in the form of hampers, the Toshao said that in the initial distribution of these by the Regional Democratic Council (RDC), only 27 out of the village’s 300 households received.

Even so, the hampers, which certainly ease the financial burden, only do so for about a week. More hampers have been requested and the village awaits assistance.

Asked whether Region Nine has ever faced such flooding in the past, Thomas said: “This is something strange for the past decade because for the past years we have not experienced so much of water on the land or so much of rainfall.”

Some farmers only have small farms, growing enough to feed their family. The Toshao said that many farmers have turned to processing the cassava into farine but require farine pans to help them do so.

The community will welcome as much assistance from the business community as is provided. Such donations and more can be made directly to the Village Council(s).

Meanwhile, the National Agricultural Research and Extension Institute (NAREI) and the Guyana Livestock Development Authority (GLDA) staff stationed in the Region have visited farms to conduct their own flood assessments.

In North Rupununi Sub-district Valley, in Aranaputa, their assessment showed that the road to the farmland was flooded and resident farmers were seen wading through chest-deep floodwaters to retrieve fruit and other crops. Some of the crops affected include cassava, bora, pineapple, papaw and banana.

In the South Pakaraimas sub-district, it was reported that many areas are now difficult to reach due to high levels of water. Farmers at Tiger Pond were also notably affected.

Flood Assessment in the Deep South Rupununi at Awarewaunau showed that heavy rainfall in the area has caused cassava roots to rot in many farms. Farmers are therefore using the young roots to make farine before it spoils.

At a meeting held at St. Ignatius’ Multipurpose building with village Councillors and farmers of St. Ignatius, Kumu and Quarrie, GLDA and NAREI staff distributed vegetable plants such as calaloo, sweet pepper, hot pepper, tomato and ochro. They invited the farmers in attendance to provide an update to the Councillors on the agriculture activities in their village and how they were affected.

The flooding across Guyana occurs simultaneously with the COVID-19 pandemic which has not stopped despite the widespread natural disaster. Dr. Uthman reminded that the Region has experienced 992 positive cases since May 2021 from which 10 lives were lost.

“The COVID team continues to do case tracking, testing and case management on a daily basis. We have conducted just about 6,000 COVID-19 tests to date….vaccination campaign is ongoing with 41.5 percent of the region receiving the first dose thus far,” he updated.

There are no reports on water-borne illnesses thus far but this is anticipated. It is expected that malaria and dengue will also be on the rise in the Region as a result of stagnant waters.

Dr. Uthman also presented that the floods have affected all of the 5 sub-districts thus far and while five families were evacuated in the Lethem area,  they have started to return to their homes.

Mon Jun 7 , 2021
Support Village Voice News With a Donation of Your Choice. …access to drinking water, hike in food prices add to flood woes Residents of Region 8 ( Potaro Siparuni) are in desperate need of relieve from the flood situation, which has affected access to drinking and resulted in a hike of food prices due to shortages. Representatives from the Civil […]