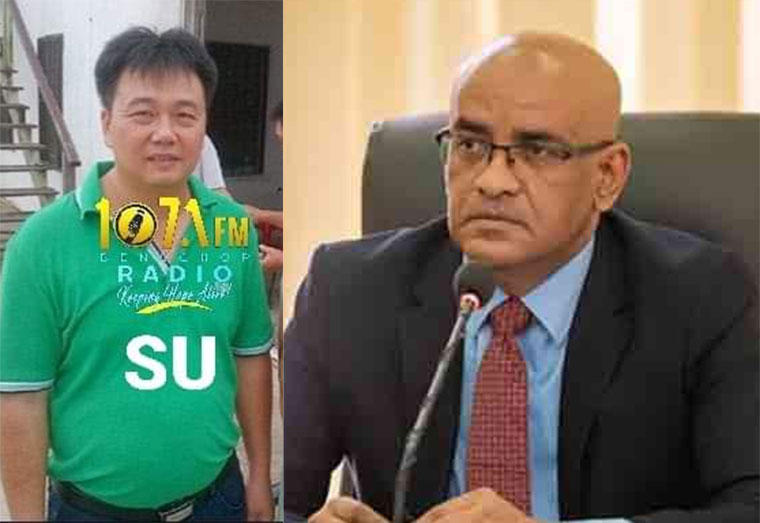 Two months after China State Construction Engineering Corporation Ltd was given the green light for the construction of the new four-lane bridge across the Demerara River, the Government has scrapped the deal, saying that the costs are too high.

On Tuesday, Minister of Public Works, Juan Edghill told the Committee of Supply of the Parliament of Guyana that Government is now engaging a new bidder after negotiations with China State Construction Engineering Corporation Ltd bore little fruit.

But the explanation proffered by the Public Works Minister contrast starkly with a statement issued by the Ministry of Finance on November 1, 2021, in which it was said that the China State Construction proposed to build the bridge at a cost of US$256.6M based on a Design-Build-Finance Model – the lowest among all bidders.

The disclosure on the scrapping of the contract came days after a US-based Vice News journalist grilled Vice President Bharrat Jagdeo on a corruption ring involving his close associate identified as “Su” and Chinese investors. During the interview, the journalist said based on information gathered from “Su,” China State Construction is among Chinese companies, which would have allegedly paid lump sums of cash to the Vice President through him for the facilitation of contracts in the construction and logging industries. The Vice President has denied all allegations of corruption.

Meanwhile, Minister Edghill told the Committee of Supply that the increase in cost for the construction of the bridge is among reasons that caused the negotiation to be terminated.

The second ranked bidder has been approached.

Notably, Government has budgeted $21B to finance the preparatory work for the construction of the bridge although it is to be constructed using the Design-Build-Finance Model.

“The Government of Guyana has provided this sum to ensure that all the necessary things that need to be done when we engage the preferred bidder, our contribution to get that project kick started and for it to be built in two years, we are getting that done now,” he said when grilled on the matter.

He added: “This $21 billion that the Honourable member is asking about, I want to assure him and all the people of Guyana, it is to ensure at all cost we get the bridge, we get the best price and that the interest of Guyana is served when we finalise a contract with whoever will be doing the construction of this bridge.”

The bridge will land at Nandy Park on the East Bank of Demerara and Meer Zorgen on the West Bank of Demerara. Its construction will result in the displacement of persons, which the Minister said is expected in any major project. According to him, money is available for the relocation of those persons.

Wed Feb 9 , 2022
Support Village Voice News With a Donation of Your Choice. … alleged perpetrator hospitalized A 40-year-old clothes vendor, who resided at Hardina Street, Georgetown, was stabbed to death during a fight on Tuesday night. Dead is 40-year-old Aubrey Baird of Lot 22 Hardina Street Georgetown. Baird was fatally stabbed at around 21:00hrs on Tuesday (February 8) in the vicinity of […]