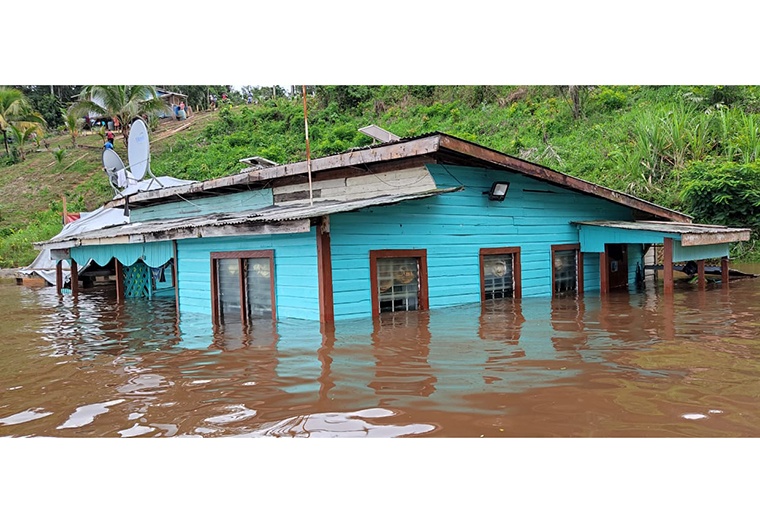 Residents of Region 8 ( Potaro Siparuni) are in desperate need of relieve from the flood situation, which has affected access to drinking and resulted in a hike of food prices due to shortages.

An assessment conducted in Sub-District 2, Mahdia found that several homes, farms, roads and mining equipment have been destroyed by flood waters, the CDC said in a statement.

Tumatumari Hill Foot to Two Miles is flooded, making it difficult for vehicles to traverse. Food prices have hiked due to shortages and access to drinking water is a concern, with water harvesting being a challenge in hard-to-reach communities.

In Tumatumari, five households with a total of 21 persons were independently evacuated to the homes of relatives who reside on higher ground. The team also assessed the flood impact at El Passo which is home to approximately 35 families (160 persons).  Five households (16 persons) which are located on the water front were severely impacted by flood water which rose to about 15 feet. This resulted in contamination of drinking water, damage to food, household items, boats and engines among other things. As a result, families relocated to higher ground. Those who reside on the hills experienced flash floods, but water has since receded.

Among the immediate needs of the affected households are food and cleaning hampers, drinking water, water tanks, life jackets, mattresses and kerosene. The CDC is currently working with the RDC to address these immediate needs.

During a meeting between the CDC, RDC and GGMC to discuss the impact of the flood on mining operations, it was noted that affected miners in the Mining District from Potaro Mouth to Koribrung and Kaiteur had moved to Mahdia.

Approximately 360 mining operations in Sub-District 2 at Mabura, Kanawaruk, Mahdia, Issano and Miniaha Landing have been disrupted as a result of flooding.

CDC’s Preparedness and Response Manager, Major Salim October said the team discovered that the bridges at Mowasi Landing and White Water have been washed away while others are damaged.

Major October said there is evidence that some mining camps were abandoned and the assessment team was told that equipment are submerged in flood waters.

Some miners who remained in the area were in the process of pumping water from the land in preparation to recommence operation as early as Monday.

Mon Jun 7 , 2021
Support Village Voice News With a Donation of Your Choice. By Alva Soloman She is the only female driver attached to the Regional Democratic Council (RDC) at Lethem and while the job is challenging , Ulanda Jobe conquers the Rupununi roadways daily , rain or shine. Ulanda , who speaks the Waphishana language fluently, told the Village Voice News that […]