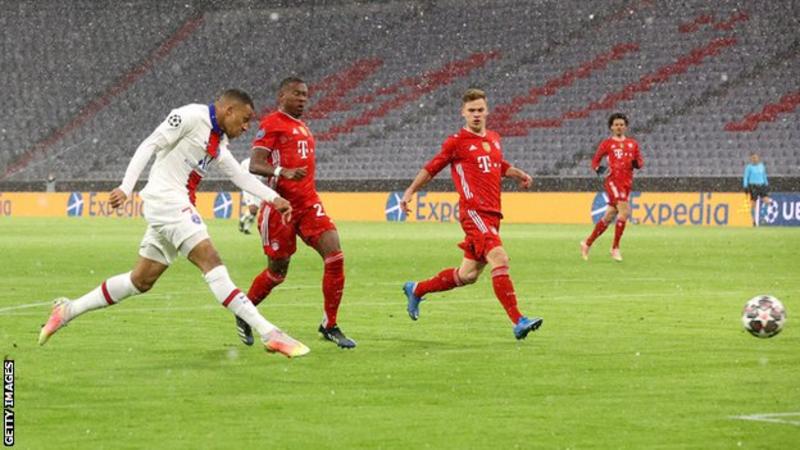 This was a meeting between last year’s finalists and they both contributed in a hugely entertaining game that in itself would have been worthy of being the final of the competition.

Mbappe took just three minutes to make his mark as he was fed by Neymar and the striker thumped a drive through Manuel Neuer’s legs.  Marquinhos doubled the lead for the French champions midway through the first half with a neat finish from a great ball by Neymar before ex-PSG striker Eric Maxim Choupo-Moting headed home to halve the deficit.

‘Everyone is going to be queuing up for Mbappe’

Neuer made amends for his earlier mistake by denying Neymar from point-blank range early in the second half, before Keylor Navas kept out strikes from David Alaba and Benjamin Pavard at the other end. But Bayern Munich kept up the pressure and deservedly levelled on the hour mark when Thomas Muller guided a header into the back of the net from Joshua Kimmich’s free-kick. However, Mbappe had the final say as he swept a low strike through Jerome Boateng’s legs late on to give PSG a third crucial away goal heading into the second leg.

Another big win for Pochettino’s PSG

This was another eye-catching result in Europe for Mauricio Pochettino’s side after they thrashed Barcelona 4-1 in the first leg of their last-16 tie. That win was all the more impressive as it happened at the Nou Camp and PSG once again went to the home of a European giant to pull off a shock result. Against a side that had not lost any of its previous 19 games in the Champions League – with 18 of those victories – the visitors produced a tactically brilliant display as they stood up to Bayern’s relentless attacks before utilising the pace of Neymar and Mbappe to pick them off on the break.

PSG were undoubtedly helped by the absence of Robert Lewandowski in the Bayern side as the hosts had 31 chances on goal but that should take nothing away from an excellent performance by Pochettino’s side that sets things up nicely for when the two sides meet in Paris on Tuesday, 13 April (20:00 BST).

Mbappe has now scored eight Champions League goals this season, the joint-most in a single season in the competition by a Frenchman, along with Wissam Ben Yedder in 2017-18 and David Trezeguet in 2001-02.

His double follows his hat-trick in the 4-1 win against Barcelona in the previous round and he said: “Like I said in Barcelona, I love this type of game. “They haven’t always gone my way and maybe they won’t in the future, but I’m not here to hide. I love this kind of game and being decisive.”

For Bayern coach Hansi Flick, this was his first taste of defeat in the Champions League and he rued the number of missed chances. “With the chances we had, we could have got a good result despite conceding three goals,” Flick said.

“We don’t like to lose, but the way the team played was top.”

Thu Apr 8 , 2021
Support Village Voice News With a Donation of Your Choice. Dear Editor The Federation of Independent Trade Unions of Guyana (FITUG) is deeply concerned by the rising number of COVID-19 cases and fatalities in our country over the last few days. Statistics emanating from the Ministry of Health has informed that as many as fourteen (14) persons have lost their […]