Guyanese have an old saying.  When yuh aze hard, yuh duz gah fuh feel.  When that is added to similar wisdom from my own parents, I find myself in a terrible boat, which confirms the profoundness of those who knew better than me.  All this resurfaces when I look at the Former President, David Granger, and none other.  My foolishness registers, reminds me of my follies, my sometimes willingness to give political leaders of Guyana, the benefit of the doubt, the stamp of approval.

Now I have hit rock bottom where such leaders (current President, former President, another former President now Vice President, Speaker of the National Assembly, and others) are concerned.  At one time or the other, and despite grave misgivings, I took the plunge and gave them room to function, in the hope of better for the masses, particularly their believing, struggling, hoping, dreaming.  In Mr. Granger I fall farther and harder, and I recognize it.  As far as I have descended, I think that the former national leader is deeper.

In Mr. Granger, I did the unthinkable and unprecedented for me.  I let guard down and gave him full backing, for whatever that was worth.  I publicly endorsed him, as a man of honour, someone of rare standing.  Rude disappointments intensified. There was genuine belief that this soldier, this leader, was not in the mold of a regular political operator, (all usual negative baggage considered).  I was wrong; In fact, I have never been more wrong; and something I must never repeat.  Not with political leaders.  Not with spiritual leaders.  Not with civil society leaders.

In terms of the PPPC’s Dr. Vindya Persaud and the PNC’s Mr. Aubrey Norton, both will have to earn any positives assessed, any appeal stirring inside.  I specifically identified these two leaders from opposite sides of the political aisle, because I believe both hold some promise, with nothing equivalent from their comrades.  But they suffer from the fallouts of the disappointments that flourish primarily from David Granger, the returning President masquerading as Vice President, and the new President, who is president of something, which eludes all, including the man himself.

I similarly dismiss foreign leaders, whether American, British, Canadian, Chinese, or Indian.  They are mainly opportunistic for own interests (at best) and pathological scoundrels (in the worst sense).  I expected nothing of the kind from Mr. Granger, but now must bow down publicly, and admit to mistakenness. He first showed his hand during the stormy elections, and though it took me a while to make up my mind, I had to part company with him, his interpretation of circumstances that brought out the worst postures from him.  The whispers were of this clique and that faction, all powerful and influential, within the PNC, which stayed his hand, and mummified him into rigid stances that flew in the face of reality and the cards that circumstances and fate had dealt him. He was absent, he was silent, he was hesitant, and he was unrepentant when he did show up; and this was in the cauldron of the crucible.

Though national in its implications, and critical in its personal leadership identification, I still say that Mr. Granger could be given a pass, a halting nod, because he fell victim to an all too human weakness.  It is the holding on to control, and holding on to it at all costs, and by any means available, and when those lack enough firepower and muscle, then to seize it quietly to fulfill some mysterious self-serving vision, feed some peculiar dark ambition. As I think of this and write accordingly, I believe that the only other Guyanese, who aces Former President Granger in his appetite for power however it could be attained, and the retention of a controlling stranglehold on it, is none other than another Former President, today’s fake Vice President.  If ever there was a fake title, and fake news, there they are in the person of the Hon. Vice President.

Along the same lines, what played out in the last disputed, still wholly unsettled national elections has now returned on stealth feet within the confines of watched, but not intensely so, halls of the PNC. Its internal struggles, first for who should be the party’s leader, and then on the vaster scale of national opposition leader, has placed Mr. Granger in the dimmest light, and indicates that what took place in the 2020 elections was not the aberration of a ‘one off’ but something that is ingrained in the depths of a character now smoky with mystery, and a political soul both cold and callous. Despite his earnest representations, the new leader waiting in the wings is impeded, hobbled.

The aspirations of a section of people are held hostage.  So, too, are the yearnings of parts of a nation that watch for some development-a person, a platform, a plan, a powerful resistant push-that stands up to the totalitarian PPPC juggernaut that wreaks criminal havoc across this land; that grievously afflicts its many diverse people.  Even once supportive powerful foreigners who facilitated return are grimacing, talking, objecting.  Mr. Norton remains effectively neutralised.  Mr. Granger should cease posturing, say the word (set Norton free), and let destiny take its course.

Surely, some of this, arguably all this, ought to have some significance for a man, a citizen, a leader of some caliber, some care for the people.  That even when his own visions for himself are threatened, I would assert thwarted, it is high time that he lets go.  Release Norton; let his program flow.  It perplexes that Mr. Granger comes across as blocking Mr. Norton vision, despite saying the opposite to party seniors.  He is again silent, distant, absent, hesitant, and resistant (like during the elections), and he stands in the way of progress, of what could be positive differences.  He is poorer for it, smaller in the puniness that he has come to represent. Sometimes, the king must stand down, Africanist tradition duly recognised.

Young biker dies after  crashing  into back of minibus

Sat Feb 19 , 2022
Support Village Voice News With a Donation of Your Choice. A 21-year-old West Berbice man lost in his life when the motorcycle  he was riding crashed into the rear of a minibus on the #8 Village Public Road West Coast Berbice around 11:30hrs on Saturday. The deceased has been identified as Devon McAlmont of Number 10 Village who was  popularly […] 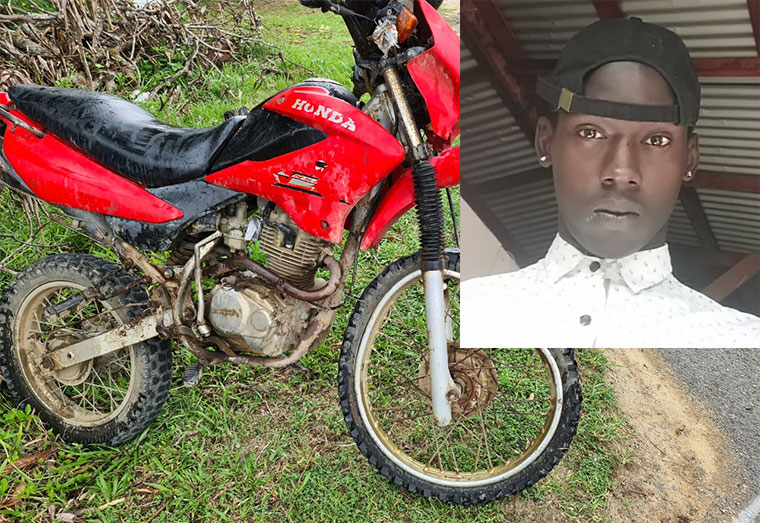