Since 2015 public life in Guyana has been dominated by the discovery of oil. In particular, both sides of Guyana’s National Assembly have been enthralled by who controls oil wealth.
The depth of the obsession with oil fuelled Guyana’s most serious electoral crisis in decades, resolved only following interventions by the Chair of Caricom, Prime Minister Mia Mottley, electoral officials from CARICOM and the Caribbean Court of Justice.
Resolving the legal crisis appears to have had no effect on the intensely adversarial relations between the two major parties. Currently the low-intensity warfare that constitutes Guyanese party politics is intolerable in terms of knock-on effects in the wider society, particularly on young people.
The sexual insult directed by a Government Minister, Mr. Dharamlall, to a female opposition parliamentarian across the floor of the National Assembly should be seen as a watershed moment rather than treated as the routine ‘rough and tumble’ of Parliament. The incident constitutes sexual harassment of both the MP in question and indirectly of all female MPs who have to sit and listen to exchanges which would not be tolerated even in a well-run public bar. Such behaviour also undermines the longer-term goal of a Parliament composed equally of males and females.

It speaks volumes about the status of women in Guyana that other MPs have not called for Mr. Dharamlall to be seriously disciplined, up to and including dismissal from Parliament. While Mr. Dharamlall should be made accountable, the shame should be shared by those tolerating such behavior under the guise of parliamentary ‘rough and tumble’. This is not only an issue of an individual’s rancour, it is now a rancid parliamentary culture, aggravating already dangerously adversarial territory.
The Speaker of Parliament, Mr. Nadir, couldn’t find the courage to address this deteriorating situation. While correctly disciplining the histrionics of another Member Sherod Duncan MP, whose behaviour only served to reinforce the nauseating Parliamentary culture, the Speaker has yet to find fault with Mr. Dharamlall.
No less than the Speaker of Parliament the Ministry of Social Protection, the official Agency for the advancement of women, has still to find its voice on this matter. Focusing its ‘Spotlight’ programme on advocacy matters such as these would do more to reassure women than a multiplicity of non-governmental-type projects which ruffle no feathers.

Wed Feb 16 , 2022
Support Village Voice News With a Donation of Your Choice. …but remains committed to low carbon strategy By Svetlana Marshall President Irfaan Ali said Guyana will aggressively pursue oil and gas to propel economic transformation and diversification that will ultimately lead to sustainable growth and development to all Guyanese. The Guyanese Head of State, at the time, was delivering the […] 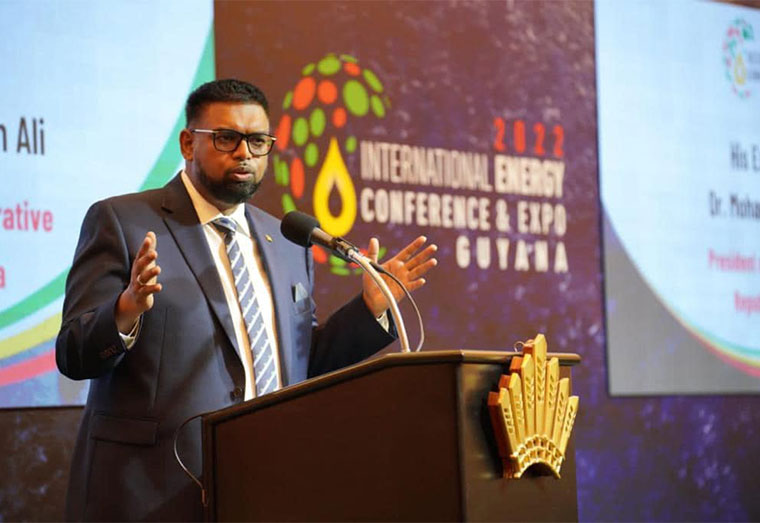