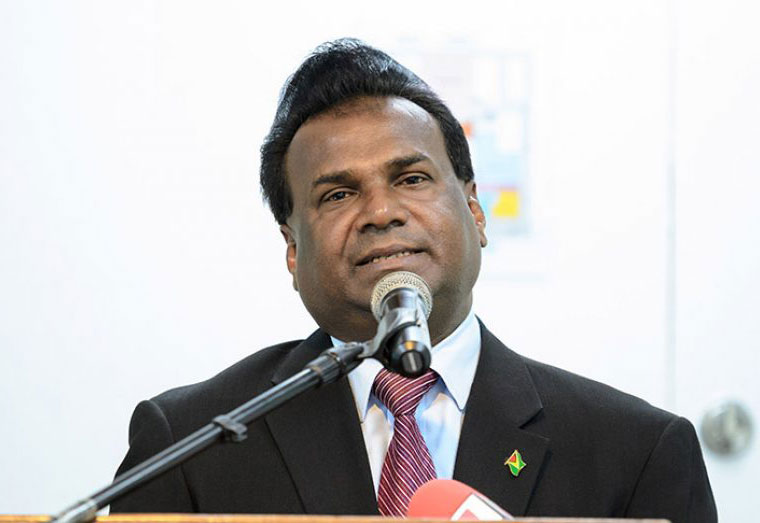 The Peoples National Congress Reform (PNCR) has joined with the Alliance For Change in condemning the PPP government for the removal of Dr. Rudy Jadoopat as Head of the GYEITI.
“No one doubts that the decision to remove Dr. Jadoopat was motivated by political malice and the PPP’s totalitarian instincts. His replacement by Dr. Prem Misir, known PPP operative, compounds an already disgraceful decision. None of this serves the interests of the people of Guyana,” the PNCR said in a statement on Monday.
According to the PNCR “Guyanese should be aware that the Extractive Industries Transparency Initiative (EITI) is a global coalition of government agencies, extractive entities and civil society organisations working together to improve transparency and accountability in the management of revenues in the oil, gas and mining sectors. It has a robust yet flexible methodology for disclosing and reconciling company payments and government revenues in implementing countries. EITI therefore promotes better governance in countries rich in natural resources and seeks to reduce the risk of diversion or misappropriation of funds generated by the development of a country’s extractive industries. If one takes a brief look back at the establishment of the EITI in Guyana (the GYEITI), one would not be surprised that this day has arrived under the PPP government, even though the PPP government in 2010 expressed Guyana’s commitment to implement EITI during a meeting with EITI Regional Director. And even though, the PPP government signed a Memorandum of Understanding (MOU) with the Extractive Industries Transparency Initiative (EITI), it never sought to implement anything.”

The party said it was the coalition government in 2015, through its Minister of Natural Resources, Raphael Trotman, which began the move to implement the EITI. In August 2017, Guyana submitted its application to the EITI International Secretariat and on 25 October 2017, Guyana was officially accepted as an EITI implementing country. All of this demonstrates the Coalition government’s commitment to good governance. “Now, the Irfaan Ali regime, similar to its mirror image in the period before 2015, seeks to prevent this robust anti-corruption mechanism from taking root in Guyana. The people of Guyana must continue to reject and penalize the PPP’s totalitarian politics and its attendant corruption and abuse of power,“ the statement concluded.
Last Saturday, it was the AFC that first shone light on the replacement of Jadoopat. In a statement that party said the termination of the official is clear evidence of the consistency of PPP’s return to Kleptocracy and its focused policy to deny the Guyanese people international standard transparency.
“The Alliance For Change notes with dismay and disappointment that the PPP is carrying through with its objective of dismantling all remaining guardrails of good governance and transparency. This is so particularly with respect to our natural resources and revenues derived therefrom. Most recently, the nation watched aghast as the Natural Resource Fund legislation was rammed through parliament and then all proceeds siphoned off in Budget 2022. Now, the regime’s termination of Dr. Rudy Jadoopat.”

The AFC noted that under the previous APNU+AFC administration, and with the coming oil production, deliberate and purposeful steps were taken to establish the Norway based EITI in Guyana and to secure membership with the international body. This was done in record time, the party said and in 2017, a Multi-Stakeholder Group (MSG) was launched and a National Coordinator, in the person of Dr. Rudy Jadoopat, an Economist, was retained to lead a professional GYEITI National Secretariat. “Steady progress was made despite challenges and roadblocks erected to frustrate the implementation of the initiative. GYEITI grew exponentially from 2017 to 2021 under his astute stewardship,” the AFC said.
According to the AFC since coming into office however, the PPP has slowly whittled away at the independence and efficacy of the GYEITI by frustrating its work and demoralising the staff and the Multi-Stakeholder Group, which is the decision-making body according to the EITI International Standard. “Now, with the sending off of Dr. Jadoopat, it appears that the plan to deny adequate professional scrutiny of the proceeds of the extractive sector, oil revenues in particular, is complete, as he is being replaced by a PPP ‘yesman’, Dr. Prem Misir. This is the crux of the matter, putting ‘yesmen’ to replace highly qualified professionals who make the best decisions in the interest of the people of Guyana, and not necessarily the political party in power,” the AFC release stated.
“It is well known that transparency is the biggest obstacle for thieves. It appears that with the draining of the Natural Resource Fund, and the denuding of GYEITI, the PPP is setting the stage for the dismantling of all the possible obstacles which are in place to prevent a few known PPP proven slick hustlers from gorging at the national patrimony,” the AFC stated.

The party said members of civil society sector of the GYEITI MSG, the decision making body should be very angry about what is taking place, including, bringing a proven PPP ‘yesman’ to replace a proven excellent professional, internationally recognized. “The US, UK, EU and Canada, even the International Oil Companies (IOCs), have regarded Rudy Jadoopat as an astute and towering professional in every respect. All Guyana, all Guyanese should embrace and welcome, not chase and chastise such highly qualified citizens of Guyana. It is obvious and unfortunate that by its actions the PPP is recklessly entombing good governance, transparency and accountability – to be replaced by widespread graft and corruption. The kleptocracy of their 23 years / last two decades has reared its ugly head again. Guyanese will not be fooled this time. Action and reaction be the rule this time around, and faster, stronger, more decisive condemnation,” the AFC stated.
Meanwhile, the Ministry of Natural Resources in response to the criticisms has said that months ago it had , invited applications for the post of National Coordinator for GYEITI. The contract for the previous Coordinator, Dr. Rudy Jadoopat, had expired almost a year ago, but the Ministry decided to keep Dr. Jadoopat on until it found a competent replacement. It was necessary that the vacancy be sufficiently advertised, and that the review process be above board.

The ministry said the position had been granted to Dr. Jadoopat, an active member of the AFC New York chapter, due to his political affiliation. “This modus operandi of the previous administration, of installing politically affiliated officials, was also demonstrated in its appointment of the Executive Director of the Environmental Protection Agency, Dr. Vincent Adams, and the Director of the Compliance Department of the Ministry of Natural Resources, Mr. Derrick Lawrence.”
According to the ministry Dr. Jadoopat re-applied and was interviewed for the post of GYEITI National Coordinator, in an objective recruitment process. However, Dr. Prem Misir was short listed as the best candidate. Dr. Misir has a proven track record of excellent performance, and a wealth of experience and knowledge. Dr Misir was the head of government propaganda arm for several years under the Bharrat Jagdeo administration. The Ministry said it is confident in Dr. Misir’s ability to ensure that the work of the GYEITI Secretariat maintains a high level of integrity, for the promotion of transparency in Guyana’s extractive sectors, in tandem with the new GYEITI multi- stakeholder group which was appointed in September 2021. It is prudent to note that the PPP/C is the only government to have committed to working on a beneficial ownership register and has already commenced the procurement process for consultants to achieve this objective – in line with EITI requirements and civil society calls. These calls fell on deaf ears during the previous administration.

Mon Feb 7 , 2022
Support Village Voice News With a Donation of Your Choice. …Teixeira says GECOM will decide on new Voter’s List Approximately $4.161B has been budgeted for the Guyana Elections Commission (GECOM), of which more than $783M will be used to facilitate Local Government Elections (LGE) later this year, Minister of Parliamentary Affairs and Governance, Gail Teixeira has said. However, no provisions […]