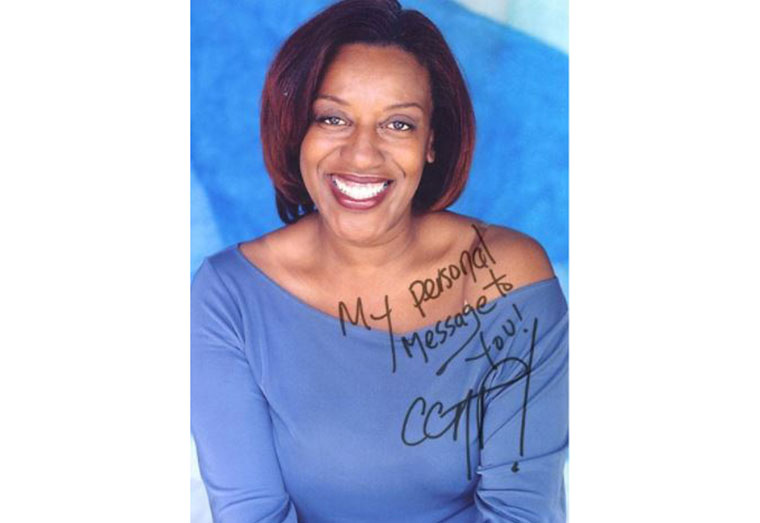 Carol Christine Hilaria Pounder aka CCH Pounder is a Guyanese-American actress. She was born in Georgetown on December 25, 1952 to Ronald Urlington Pounder and Betsy Enid Arnella (née James). Now widowed, she was married to Boubacar Koné, who co-founded the Musee Boribana in Dakar, Senegal, Africa, and the Pounder-Kone Art Space in Los Angeles, USA.
Reportedly when she was a child, at boarding school, she was hit by a pickle ball in the back of her head resulting in memory problems. She said the nuns gave her poems to remember to try and get her memory going again. It is that memory she counts on as an actress, which has earned her several roles in the industry, prestigious nominations and awards.

CCH graduated from Ithaca College, New York and received an Honorary Doctorate of Fine Arts from the school. She serves on the Board of the African Millennium Foundation and was a founding member of Artists for a New South Africa.
Pounder an award winning actress and has appeared in numerous miniseries, plays, films, and television shows. She appeared on the CBS series NCIS: New Orleans, portraying “Dr. Loretta Wade.” She played “Mo ‘at” in the Avatar sequel, and is expected to reprise said role in Avatar 2 and 3. In the critically acclaimed FX series CCH played “Claudette Wyms” for seven years.

Her other notable projects include the television shows- Warehouse 13, Revenge, Sons of Anarchy, Brothers, Law and Order: SVU and, the Home Box Office’s No. 1, Ladies’ Detective Agency where she earned an Emmy® nomination. She has acted in “The Shield” earning herself another Emmy® nomination, the MIB Prism Award, two Golden Satellite Awards and the “Genii Excellence in TV Award.”
Other honours for Pounder include an Emmy® nomination for her role as Dr. Angela Hicks on the NBC series ER, and an Emmy® nomination for her role in FOX’s The X-FILES. In addition, she received a Grammy® Award nomination for “Best Spoken Word Album” for “Grow old along with me, the best is yet to be.” Pounder won an AUDIE, the Audio Publishers Association’s top honour, for “Women in the Material World.”

Her film credits include Home Again, Rain, Prizzi’s Honour, Postcards from the Edge, Robocop 3, Tales from the Crypt: Demon Knight, Face/Off, Silver, End of Days, Mortal Instruments: City of Bones, Avatar, Bagdad Café, Godzilla: King of the Monsters.
Pounder is an avid art collector, patron, gallery owner and founder. She has an extensive collection that includes Caribbean and African artists and artists of the African Diaspora. Though her preference is heavily focused on Contemporary her collection includes traditional African sculptures. Some of her collections were loaned to Xavier University and on exhibit as Somerset House in England.
For her advocacy in art, CCH has been the recipient of the Visionary Leadership Award in Performing Arts from the Museum of the African Diaspora (MOAD) in San Francisco, the 2015 Carney Awards, the Lifetime Achievement Award from Chase Brexton Health Care in Baltimore, 2015 Honoree at the Grand Performances Gala in Los Angeles.

In 2016, she was the honoree of the SweetArts Performing Arts, issued by the Contemporary Arts Center in New Orleans. In 2017 she received the Women of Power Award from the National Urban League and in 2018, the Bob Marley Award from AFUWI (American Foundation for the University of the West Indies).
And through her many successes she is taking Guyana (and the Caribbean) along. She is quoted saying: “I’ve got a general callout with the Caribbean world in which I’m interested in helping in any way to get their well-written good stories out to the rest of the world. I am really interested in helping those stories get to a completion and public viewing. (Sources:internet, cchpounder.net)

Sun Jan 16 , 2022
Support Village Voice News With a Donation of Your Choice. The day I recall with trepidation, a church outing of water frolic, in which water football indulgent we were, invitational to both swimmers and non-swimmers. And with the swimming disabled I counted, in a precarious ball retrieval, whence depth unexpectedly transitioned deep, with flailing arms evidencing drowning. So as it […]