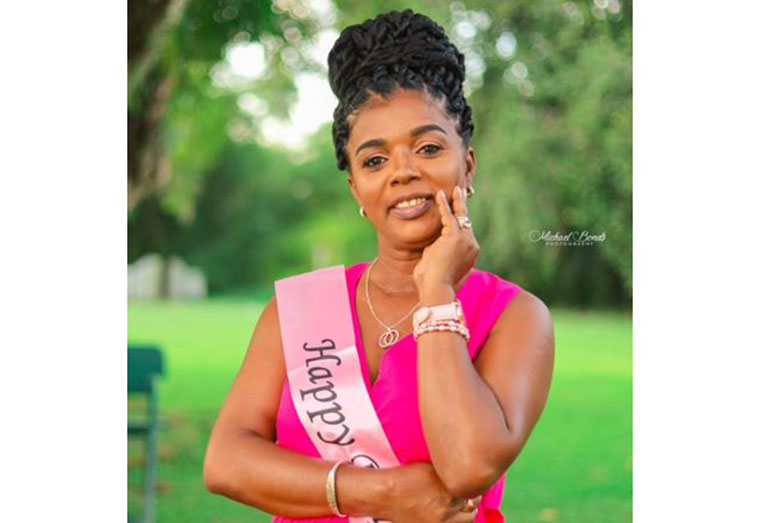 Over the past six years, Pamela Kellman Bradford has been producing quality coconut oil in the mining town of Linden, allowing her product, ‘Pam’s Coconut Oil’ to become a popular brand in the community.

Fifty-one-year-old Bradford began making the virgin coconut oil in 2015 with a friend who taught her the process of creating the oil that is traditionally known for maintaining and obtaining healthy hair and skin. That said year, Bradford managed to perfect her craft and went on to selling her virgin coconut oil solo at the Wismar Market. Since then, the mother of three has added five fragrances of coconut oil to her line: cherry, jasmine, lavender, vanilla and strawberry which can be used for both hair and skin. She also managed to create what some may call a “magical formula for hair,” the ‘Herbal Hair Oil.’

According to Bradford, products range from $600 to $3000. Bradford who hails from Vigilance, East coast Demerara has been residing in Linden since 2005. Before commencing her coconut oil business Bradford was a stay-at-home-mother and in 2007 she began creating floral decors, wreaths and bouquets which she sold at her stall in the Wismar Market from the said time to present.

Bradford described the beginning of her coconut oil business in 2015 as “rough” since her brand was not popular at the time. Nevertheless, it was her drive and determination that allowed her business to bloom.

“Honestly it was really rough doing this business on my own but I kept pushing and pushing until I got my own mill. I use to have to pay to get the coconut grind but now I have my own equipment to make my own products. So I am better off now than three to four years back,” she told Village Voice News.

Bradford indicated that currently, business is flourishing and she does not regret working hard on her business. “When I started the business I had applied for a grant but I was never given it so I worked really hard to push my business forward and I definitely don’t regret working hard for what I wanted. To me the oil business is doing really well presently,” she noted.

Challenges experienced by this entrepreneur includes insufficient amount of coconuts and not having the type of containers she uses readily available.

Nevertheless, Bradford is preparing for the expansion of her business in the near future. The agro-processor is looking to add more products to her catalog.

“Once God spares my life I would like to see my business expand. I plan on employing more people than the two employees that I have presently and I also plan on adding new products to my catalog,” she added. Bradford’s advice to persons thinking of becoming an entrepreneur is to “just get started.” “Owning your own business is very good. If you put your mind to a business idea go ahead with it, run with it and you will succeed,” she posited. Person interested in contacting the owner of Pam’s coconut oil and floral decoration, Pamela Kellman Bradford can send a message to her business Facebook page, ‘Pam’s coconut oil and floral decoration’ or call her on 6866881.

Sun Dec 19 , 2021
Support Village Voice News With a Donation of Your Choice. …as govt cuts financial assistance, withholds stipend of deputy mayor Without any known justification, Permanent Secretary of the Ministry Local Government and Regional Development, Prema Roopnarine has ordered that all stipends paid to the Deputy Mayor of Mahdia, Juewayne Mendonca-Burrowes be halted. In an interview with the Village Voice Newspaper, […]