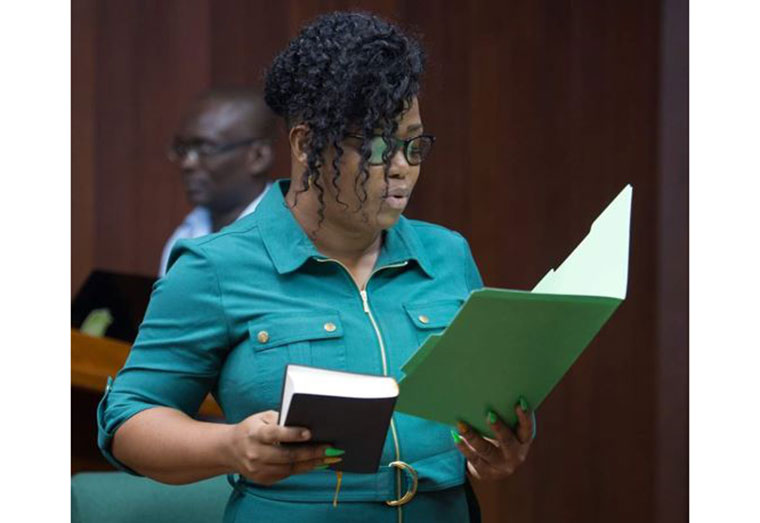 Without any known justification, Permanent Secretary of the Ministry Local Government and Regional Development, Prema Roopnarine has ordered that all stipends paid to the Deputy Mayor of Mahdia, Juewayne Mendonca-Burrowes be halted.

In an interview with the Village Voice Newspaper, the Deputy Mayor said for the past four months – September to December, 2021 – she has not received her monthly stipend, which collectively now total $240,000.

Mendonca-Burrowes said, despite numerous queries, no formal reason has been given for the cease in payments, however, she suspects it political move to silence her.

In an Internal Memorandum dated October 4, 2021, addressed to the Permanent Secretary from Nandranie Harrichan – the Principal Municipal Services Officer, stipends totaling $1.84M were sought for the Mayors, Deputy Mayors and Town Clerks across the 10 Towns, however, with the exception of the Mahdia Deputy Mayor.

A note below the request states: “As per your instruction, Deputy Mayor Ms Juewayne Mendonca-Burrowes has not been included in this request until further guidance is provided.” The memorandum though dated October 4 was stamped November 2.

Mendonca-Burrowes noted that while she has not received stipends for a period of four months, her colleagues, the Mayor, David Adams and Town Clerk, Molica Adams have not been paid for September, November and December.

Mendonca-Burrowes suspects that the halt in the payment of her stipend is political in nature due to her being outspoken on matters of the state.

Mendonca-Burrowes, an A Partnership for National Unity + Alliance For Change (APNU+AFC) Member, said since taking Office in August 2020, the Government through the Ministry of Local Government has starved the municipality of much needed funds.

The Deputy Mayor explained the Council had developed three avenues for revenue, the sale of sand, garbage collection and the weeding of compounds under the Department of Education, however, once there was a change in administration, the contracts for the weeding of the compounds ceased.

It was pointed further that shortly after Mahdia became a town, the Ministry of Communities provided the Council with a grant of $5M to assist with wages and salaries, and to offset other operational expenses. “Besides that, we would get other small grants to facilitate our dumpsites and so on. So we were getting assistance from Central Government but since this new Government has been installed, we do not receive any assistance, none at all,” the Deputy Mayor contended.

She said due to the lack of adequate financial support, Mahdia is struggling.

Strapped for cash, Mendonca-Burrowes said the Council devised another plan but it was met with objections from the Minister of Local Government Nigel Dharamlall.

“Because Mahdia is a place where the lands are leased lands, and are not transported lands, we can’t do taxes as yet. So we came up with a strategy to implement a system of miscellaneous fees through the Business Sector. We did a proposal and in that proposal, we proposed that the big established business it would pay a $1000 a day while the smaller businesses would pay $400 per day,” she said.

According to her, the Council went business to business to consult with the town’s businessmen and women, some of whom were very receptive while others recommended monthly payments. She said in the middle of the consultative process, the Mayor received a call indicating that the Local Government Minister will be in Mahdia on October 2 to facilitate the payment of subvention. The Mayor was subsequently invited to a meeting with the Minister and the business representatives, majority of whom are aligned to the People’s Progressive Party/Civic (PPP/C) Government.

Though she was not present, Mendonca-Burrowes said a report from the Mayor indicate that the Minister was very disrespectful during the discourse. “The Minister took it upon himself to upbraid our Mayor. The Mayor did not get a chance to respond or offer clarity to whatever was said,” she told this newspaper.

The Deputy Mayor made it clear that notwithstanding the posture of the Government, the Council will continue to act in the best interest of Mahdia.

Sun Dec 19 , 2021
Support Village Voice News With a Donation of Your Choice. A member of the Guyana Defence Force Coastguard, Ordinary Rating, Kenroy Sooklall is feared drowned following a boat mishap in the Essequibo River on Friday. The GDF in a statement said that the search continued early Saturday morning for Sooklall following the mishap in the vicinity of St. Lawrence. According […]