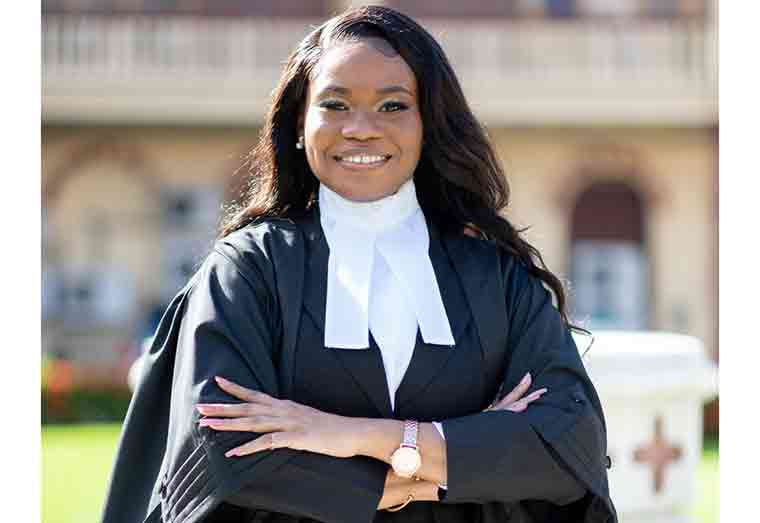 For Gabriel Benn becoming a lawyer was a matter of

When the Coronavirus (COVID-19) Pandemic hit the Caribbean in March 2020, the region ground to a halt creating much uncertainty. For Gabriel Benn – a young Guyanese, who, at the time, was reading for her Legal Education Certificate at the Hugh Wooding Law School in Trinidad and Tobago– the prospects of completing her studies within the two-year timeframe appeared bleak. But determined to fulfill her lifelong dream of becoming an attorney, Benn persevered, and, in doing so, maneuvered through the many challenges she encountered to fulfill her goal. Today, she is an Attorney-at-Law, who has her eyes set on Constitutional, International and Humanitarian Law.

Detailing her journey during an interview with the Village Voice Newspaper, Benn, who resides in Georgetown, said from a tender age, she longed to be a lawyer, after witnessing her grandmother struggle to secure legal rights to a plot of land.

“I was inspired to pursue my studies in law due to my familial surroundings. Whether it be a close family or friend each had a legal issue that required a lawyer. Many were strapped for finances and not knowledgeable about their rights so seeing them helpless, unaware and in need was my initial motivator. My inspiration also came from TV series like Matlock and Law & Order as I desired to better understand how human behavior and our society functions to better advocate on their behalf.

As I continued into my studies, the reasons developed. I wanted to study law to assist and advocate for my country in regional and international affairs. At present those reasons are still alive, in addition to informing Guyanese about their rights has become a priority of mine that I hope I can fulfill as I enter into this profession,” she explained.

Notwithstanding having to hop from building to building after fire ravaged the Sacred Heart Primary School on Christmas morning 2004 – Benn landed a spot at the St. Joseph High School after successfully completing her National Grade Six Assessment (NGSA).

At the Caribbean Secondary Education Certificate (CSEC) Examinations, in 2013, she secured 11 passes inclusive of eight Grade Ones, and by 2015, anothereight passes at the Caribbean Proficiency Examinations (CAPE). But despite her excellent performance, Benn’s application to study Law at the University of Guyana in 2015 was rejected.

“I took an unconventional route in attaining my goal to study law. After graduating at the top of my class at St. Joseph High School, I had to face thereality that, that was just not enough to get me into UG Law programme. Therefore, I placed all that shame and wounded pride into ensuring I excel in my 1st Year at the University of Guyana inInternational Relations to apply to study law a 2nd time,” Benn said in her speech as she was being admitted to the Bar by Justice Nareshwar Harnanan on November 25.

After successfully completing her first year of International Relations, Benn was admitted to study law at the University of Guyana. Even while she pursued her Degree in Law, she volunteered at the Guyana Responsible Parenthood Association (GRPA) where she taught persons about Sexually Transmitted Diseases (STDs) and Sexual Reproductive Rights in Guyana.  At the end of her three-year programme, Benn was among the top 25 law students. In fact, in 2019, she graduated from the University of Guyana with a Bachelor of Laws (Distinction).

Being among the top 25 law students gained her an automatic entry into the Hugh Wooding Law School in 2019, however, securing more than GUY$3M to advance her studies had proven to be a challenge. With the help of her parents, family and friends, she secured the finances needed.

But just when Benn was settling in, COVID-19 struck the region. In Trinidad and Tobago, the first case of COVID-19 was recorded on March 12 resulting in the Government instituting a series of public health measures to suppress the spread of the disease. By March 30, a stay-at-home order was instituted, and the airports were closed. The situation was no different in Guyana, where the first case was detected on March 11.

“The pandemic disrupted my studies and I was unsure whether we would be able to have an exam to complete our 1st Year on time before September.  I was fearful of travelling and contacting the disease and carrying it back home to my family where at the time no vaccine existed,” she explained.

In September 2020, after completing her first year, Benn along with other Guyanese students took a decision to return home but with commercial flights halted at the time, they were left with no other choice than to charter a plane back home.

“I was forced to return to Guyana and continue my last year of Law School virtually. While there were benefits such as saving expenses and being among family in the comfort of your home; they were some challenges,” she told this newspaper.

According to her, poor internet connection, and the constant disruption in the supply of electricity were among the primary challenges.

“Studying and attending classes were challenging at times because I would have to miss classes due to an unexpected power outage. This was mentally draining as I was missing vital class times. This caused me at times to utilise “data” as a means to protect myself from missing out from classes virtually,” she said.

She added: “Virtual classes tried to accommodate the needs of everyone but I found myself feeling like there was a disconnect between my lecturers and self. That one on one time was so short and sometimes nearly impossible but I tried to be understanding as I knew my lecturers were dealing with this new mode of learning also.”

CONSTITUTIONAL, INTERNATIONAL AND HUMANITARIAN LAW
In her acceptance speech before Justice Harnanan and Senior Counsel Roysdale Forde, MP, who petitioned the High Court on her behalf, Benn spoke of her passion for Constitutional, International and Humanitarian Law.

“Our constitution, our role in CARICOM and our international borders are contentious issues that need more young minds to tackle them. I want to tackle our dualistic system and the reality of enforcing the laws and treaty of CARICOM and its effectiveness in truly bringing forth regional integration. Where our borders end and begin and our rights over resources found within our territorial seas x exclusive economic zone are discussions I will be a part of,” Benn said.

She hopes with practice and continuous training, she will be able to dabble in those areas, and become an advocate for her country.

Sun Dec 5 , 2021
Support Village Voice News With a Donation of Your Choice. —-Barbadian specialist conducted trials, provide technical assistance By Svetlana Marshall The Department of Ophthalmology at the Georgetown Public Hospital Corporation (GPHC), in a historic move, conducted a series of retinal surgical trials, as it takes strategic steps to offer retinal surgeries in the future. Last Tuesday, Wednesday and Thursday, the […]