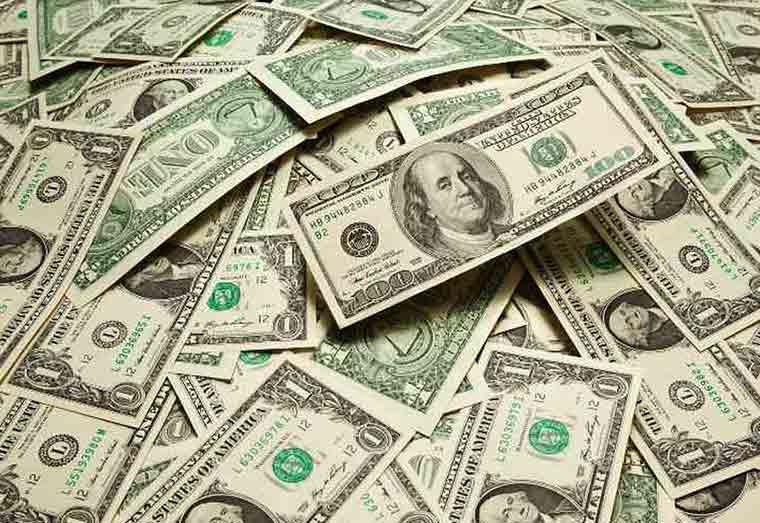 —World Bank estimates pegs it at 5% of country’s GDP

Guyanese have been complaining about the high cost of living and unemployment since 2020 and many have turned to their overseas relatives to cushion the blows from the economic fallout.

In its Mid-year report the Ministry of Finance said that at the end of the first half of the year, consumer prices were 5.6 percent higher than the levels recorded at the end of 2020. This increase was due largely to higher food prices, as a result of the inclement weather and shortages experienced due to extensive flooding across our Administrative
Regions, the report stated.

The food category, which contributed 5.3 percentage points to the inflation rate, grew by 12.5 percent over the first half of the year, driven mainly by higher prices across the vegetables and vegetable products, fruits and fruit products, pulses and pulse products, and meat, fish and eggs sub-categories.

These grew by 54.6 percent, 33 percent, 11.3 percent and 6.5 percent, respectively. Additionally, bottlenecks in the global supply chain resulted in some emergent measure of imported inflationary pressures, transmitted primarily through escalated costs and delays in international shipping. Considering that significant elements of the movement in the consumer price index are transitory, they are unlikely to have lasting long-term impact on inflation. Notwithstanding that the rainy season can continue beyond August, food prices are expected to revert in the latter part of the year, including as a result of relief measures aimed at supporting production. Inflation is now projected to be in the order of 3.8 percent for 2021.

In 2020, the figure was US429M. In its report the World Bank said remittances to low- and middle-income countries are projected to have grown a strong 7.3 percent to reach $589 billion in 2021. This return to growth is more robust than earlier estimates and follows the resilience of flows in 2020 when remittances declined by only 1.7 percent despite a severe global recession due to COVID-19, according to estimates from the World Bank’s Migration and Development Brief released last week.

For a second consecutive year, remittance flows to low- and middle-income countries (excluding China) are expected to surpass the sum of foreign direct investment (FDI) and overseas development assistance (ODA). This underscores the importance of remittances in providing a critical lifeline by supporting household spending on essential items such as food, health, and education during periods of economic hardship in migrants’ countries of origin, the World Bank report stated. “Remittance flows from migrants have greatly complemented government cash transfer programmes to support families suffering economic hardships during the COVID-19 crisis. Facilitating the flow of remittances to provide relief to strained household budgets should be a key component of government policies to support a global recovery from the pandemic,” said Michal Rutkowski, World Bank Global Director for Social Protection and Jobs.

Factors contributing to the strong growth in remittance are migrants’ determination to support their families in times of need, aided by economic recovery in Europe and the United States which in turn was supported by the fiscal stimulus and employment support programs. In the Gulf Cooperation Council (GCC) countries and Russia, the recovery of outward remittances was also facilitated by stronger oil prices and the resulting pickup in economic activity.

Remittances registered strong growth in most regions. Flows increased by 21.6 percent in Latin America and the Caribbean, 9.7 percent in Middle East and North Africa, 8 percent in South Asia, 6.2 percent in Sub-Saharan Africa, and 5.3 percent in Europe and Central Asia. In East Asia and the Pacific, remittances fell by 4 percent – though excluding China, remittances registered a gain of 1.4 percent in the region. In Latin America and the Caribbean, growth was exceptionally strong due to economic recovery in the United States and additional factors, including migrants’ responses to natural disasters in their countries of origin and remittances sent from home countries to migrants in transit.

The cost of sending $200 across international borders continued to be too high, averaging 6.4 percent of the amount transferred in the first quarter of 2021, according to the World Bank’s Remittance Prices Worldwide Database. This is more than double the Sustainable Development Goal target of 3 percent by 2030. It is most expensive to send money to Sub-Saharan Africa (8 percent) and lowest in South Asia (4.6 percent). Data reveal that costs tend to be higher when remittances are sent through banks than through digital channels or through money transmitters offering cash-to-cash services.

“The immediate impact of the crisis on remittance flows was very deep. The surprising pace of recovery is welcome news. To keep remittances flowing, especially through digital channels, providing access to bank accounts for migrants and remittance service providers remains a key requirement. Policy responses also must continue to be inclusive of migrants especially in the areas of access to vaccines and protection from underpayment,” said Dilip Ratha, lead author of the Brief and head of KNOMAD.

Remittances are projected to continue to grow by 2.6 percent in 2022 in line with global macroeconomic forecasts. A resurgence of COVID-19 cases and reimposition of mobility restrictions poses the biggest downside risk to the outlook for global growth, employment and remittance flows to developing countries. The rollback of fiscal stimulus and employment-support programs, as economies recover, may also dampen remittance flows.

Regional Remittance Trends
Officially recorded remittance flows to the East Asia and Pacific region are projected to have fallen by 4 percent in 2021 to $131 billion. Excluding China, remittances to the region grew by 1.4 percent in 2021 and is projected to grow by 3.3 percent in 2022. As a share of gross domestic product (GDP), top recipients in the region are smaller economies such as Tonga (43.9 percent), Samoa (21.1 percent), and the Marshall Islands (12.8 percent). Remittance costs: The average cost of sending $200 to the region fell to 6.7 percent in the first quarter of 2021 compared to 7.1 percent a year earlier. The five lowest-cost corridors for the region averaged 2.7 percent for transfers primarily to the Philippines; while the five highest-cost corridors, excluding South Africa to China, which is an outlier, averaged 15 percent.

After falling 8.6 percent in 2020, remittance flows to Europe and Central Asia are projected to have grown 5.3 percent to $67 billion in 2021 due to stronger economic activity in the European Union and surging energy prices. Remittances are projected to grow by 3.8 percent in 2022. Remittances are currently the largest source of external financing in the region. Inflows have been higher or equal to the sum of FDI, portfolio investment, and ODA in 2020 and 2021. As a share of GDP, remittances in the Kyrgyz Republic and Tajikistan stand above 25 percent. Remittance costs: The average cost of sending $200 to the region rose slightly to 6.6 percent in the first quarter of 2021 from 6.5 percent a year earlier, largely reflecting a sharp increase in costs in the Turkey-Bulgaria corridor. Russia is one of the lowest-cost senders globally with costs falling from 1.8 percent to 1 percent.

Remittance flows into Latin America and the Caribbean will likely reach a new high of $126 billion in 2021, registering a solid advance of 21.6 percent compared to 2020. Mexico, the region’s largest remittance recipient, received 42 percent ($52.7 billion) of the regional total. The value of remittances as a share of GDP exceeds 20 percent for several smaller economies: El Salvador (26.2 percent), Honduras (26.6 percent), Jamaica, (23.6 percent), and Guatemala (18 percent). The adverse effects of COVID-19 and Hurricanes Grace and Ida contributed to higher remittance flows to Mexico and Central America. Other main drivers include recovery in employment levels and fiscal and social assistance programs in hosting countries, particularly the United States. An increase in the number of transit migrants in Mexico and other countries, and the remittances they received from overseas to support their living and travel costs, appears to be a significant factor behind the strong increase. In 2022, remittances are expected to grow at 4.4 percent, mainly due to a weaker growth outlook for the United States. Remittance costs: Sending $200 to the region cost 5.5 percent on average in the first quarter of 2021, down from 6 percent a year earlier. Mexico remained the least expensive recipient country in the G20 group, with costs averaging 3.7 percent. But remittance costs are exorbitant in smaller corridors.

Remittances to the developing countries of the Middle East and North Africa region are projected to have grown by an estimated 9.7 percent in 2021 to $62 billion, supported by a return to growth of host countries in the European Union (notably France and Spain) and the upsurge in global oil prices which positively affected the GCC countries. The increase was driven by strong gains in inflows to Egypt (12.6 percent to $33 billion) and to Morocco (25 percent to $9.3 billion), return migration and transit migration respectively, playing important roles in the favorable outturns. Remittance receipts for the Maghreb (Algeria, Morocco, and Tunisia) surged by 15.2 percent, driven by growth in Euro Area. Flows to several countries fell in 2021, including Jordan (6.9 percent decline), Djibouti (14.8 percent decline), and Lebanon (0.3 percent decline). For the developing MENA region, remittances have long constituted the largest source of external resource flows among ODA, FDI, and portfolio equity and debt flows. The outlook for remittances in 2022 is one of slower growth of 3.6 percent due to risks stemming from COVID-19. Remittance costs: The cost of sending $200 to MENA fell to 6.3 percent in the first quarter of 2021 from 7 percent a year ago.

Remittances to South Asia likely grew around 8 percent to $159 billion in 2021. Higher oil prices aided economic recovery and drove the spike in remittances from the GCC countries which employ over half of South Asia’s migrants. Economic recovery and stimulus programs in the United States also contributed to the growth. In India, remittances advanced by an estimated 4.6 percent in 2021 to reach $87 billion. Pakistan had another year of record remittances with growth at 26 percent and levels reaching $33 billion in 2021. In addition to the common drivers, the government’s Pakistan Remittance Initiative to support transmission through formal channels attracted large inflows. In addition, Afghanistan’s fragile situation emerged as an unexpected cause of remittances in 2021 intended for Afghan refugees in Pakistan as well as for families in Afghanistan. Remittances is the dominant source of foreign exchange for the region, with receipts more than twice as large as FDI in 2021. Remittance costs: South Asia has the lowest average costs of any world region at 4.6 percent. But sending money to South Asia through official channels is expensive compared with informal channels which remain popular. Cost-reducing policies would create a win-win situation welcomed by migrants and South Asian governments alike.

Remittance inflows to Sub-Saharan Africa returned to growth in 2021, increasing by 6.2 percent to $45 billion. Nigeria, the region’s largest recipient, is experiencing a moderate rebound in remittance flows, in part due to the increasing influence of policies intended to channel inflows through the banking system. Countries where the value of remittance inflows as a share of GDP is significant include the Gambia (33.8 percent), Lesotho (23.5 percent), Cabo Verde (15.6 percent) and Comoros (12.3 percent). In 2022, remittance inflows are projected to grow by 5.5 percent due to continued economic recovery in Europe and the United States. Remittance costs: Costs averaged 8 percent in the first quarter of 2021, down from 8.9 percent a year ago. Although intra-regional migration makes up more than 70 percent of cross-border migration, costs are high due to small quantities of formal flows and utilization of black-market exchange rates.

Sun Nov 28 , 2021
Support Village Voice News With a Donation of Your Choice. …as GECOM moves to pick CEO By Svetlana Marshall With the Guyana Elections Commission (GECOM) scheduled to meet this week to analyze the Curriculum Vitae (CVs) of those shortlisted for the seven top electoral posts, an elections expert said it likely that GECOM’s Information Technology Manager Aneal Giddings would be […]