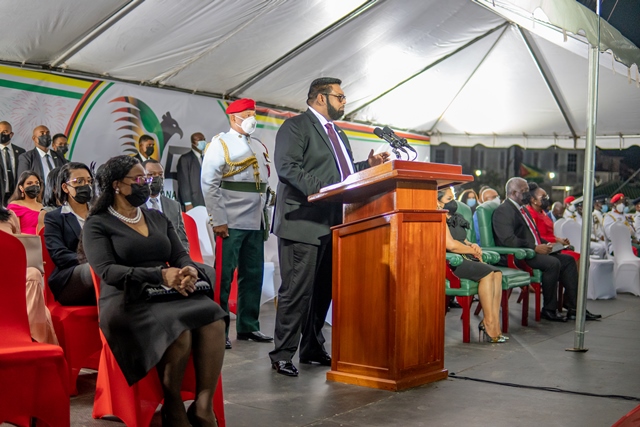 As Guyana steps into economic strength through the oil and gas industry, President Irfaan Ali said on Tuesday that his Government will ensure the growth and development of all Guyanese in the areas of education, agriculture, infrastructure, manufacturing and more.

However, to facilitate many of these sectors, cheaper energy costs are needed. Speaking about the matter to the gathering outside at the Umana Yana Square, Kingston, Georgetown, at the 55th Independence Day Flag Raising Ceremony on Tuesday, the President said that the manufacturing, agriculture and other sectors have been affected in the past by the high price of energy.

He said that the Government’s private sector partners have pointed to the high cost of doing business and which affects their capacity to market their goods abroad competitively, earning revenues in foreign exchange for the benefit of the country.

He assured that his government will respond to this situation. “We cannot be a nation that produces oil and gas, earning considerable sums from it without passing on the benefits to all sectors of our society. The cost of electricity must be reduced for both business and household consumption. These mechanisms will be presented to the nation, through the appropriate bodies, for endorsement. At the bottom line, domestic consumers must be given relief and businesses should be rendered more competitive,” he said.

He added that the Government is carefully considering mechanisms by which the cost of energy can be reduced across our society by utilising an appropriate percentage of its national earnings from oil and gas to do so.

Furthermore, the Head of State said that Guyana’s financial resources must be used to improve the quality of life for all communities. “We fought for Independence to give our people the quality of life of which they had been deprived. If Independence is to have any real meaning, it is to uplift our people from the ravages and limitations of the past, and to give them a better life with better opportunities under better circumstances,” he posited.

President Ali emphasized that the Government’s objective is also to build connectivity to all parts of Guyana, by roads, bridges, telecommunications, air and river transportation. He said that there is also the need to build new communities further inland from the coastal belt to spread the population, reduce prices for land and housing, and ease traffic congestion.

“In other words, we must use the land space with which we have been blessed as Guyanese to create new and improved living conditions. New area of growth and development and new population centres,” he said.

Regarding education, President Ali underscored that Guyana must be assured of educational facilities that will allow everyone to attain the highest standard of achievement.

He said that about nine months ago, his Government took up Office and commenced the programme to award 20,000 scholarships to young men and women, to further their education. This, he said, is a promise made that was kept, much like the other promises his Government is working to fulfil.

“We did not make an empty promise; we kept it. As we intend to keep all our promises to the people of Guyana,” the President said, adding:

“Free university education will be delivered, and schools’ infrastructure will be improved to provide a conducive environment for learning. Guyana must become a knowledge-based society, capable of competing with the best in the world.”

He urged Guyanese to “dream big” and to rest assured that the Government will work to create the circumstances to fulfil their dreams.

Thu May 27 , 2021
Support Village Voice News With a Donation of Your Choice. ….Narrower study regimen to be released by Friday  (Jamaica Gleaner) Yielding to intense lobbying from teachers, governments, and UNICEF, the Caribbean Examinations Council (CXC) has made adjustments to this year’s examinations in the wake of COVID-19 displacement as well as volcanic activity in St Vincent. Examinations at the Caribbean Advanced […]