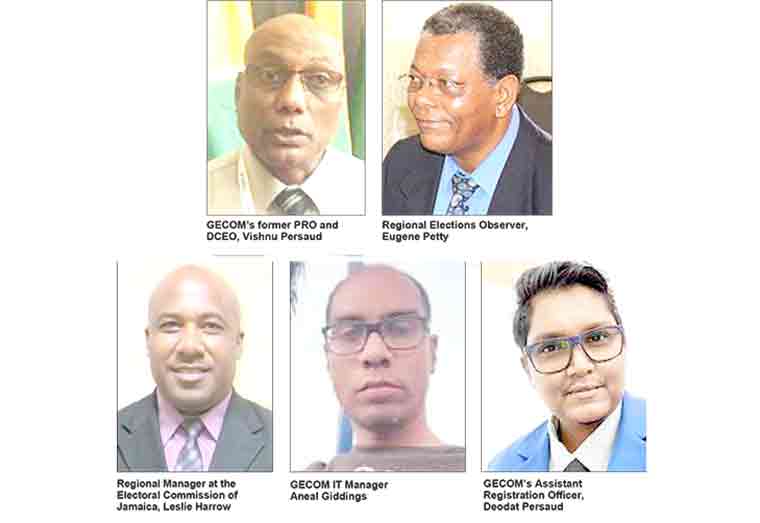 …as GECOM moves to pick CEO

With the Guyana Elections Commission (GECOM) scheduled to meet this week to analyze the Curriculum Vitae (CVs) of those shortlisted for the seven top electoral posts, an elections expert said it likely that GECOM’s Information Technology Manager Aneal Giddings would be dropped from the list of nominees for the Chief Elections Officer (CEO) post over lack of experience in Electoral Management.

Further, it has been predicted that there will be gridlock over the qualification and experience of Vishnu Persaud – a candidate, who served as both Public Relations Officer (PRO) and Deputy Chief Elections Officer (DCEO) at the Elections Commission.

Based on the requirements set by GECOM, Candidates for the CEO post, must have a Post Graduate Degree in Public Administration, Law or Management and specific training and verifiable experience in managing election systems along with at least 10 years of experience in a senior management position overseeing and directing diverse operations aimed at achieving targets within specific deadlines. Additionally, they are required to have at least 10 years of experience in Management of National Elections and Election Systems.

Giddings, according to his Linked-In profile, has a Master of Science (MSc) in Project Management from the University of the West Indies, St. Augustine Campus; and a Bachelor of Engineering in Computer Engineering from Universidad de Matanzas.

However, the elections expert said while Giddings has a post graduate degree, he does not have 10 years of experience in the Management of National Elections and Elections System. It was pointed out that the IT Manager was only employed at the Elections Secretariat in 2018 – giving him a total of three years.

“Aneal Giddings has only worked at GECOM for three years, and so, he cannot meet a 10-year experience of management of national elections and election system,” the expert reasoned. As such, it is believed that should the Elections Commission follow its criteria to a ‘t,’ Giddings will not make it to the interviewing process for the top GECOM post.

Giddings was among six candidates shortlisted by the People’s Progressive Party/Civic (PPP/C) aligned Commissioners for the post of CEO from a total of 20 applicants.

Vishnu Persaud, who in 2018 was rejected by the Elections Commission for reappointment to the post of Deputy Chief Elections Officer (DCEO), is the PPP/C’s aligned Commissioners’ top nominee for the post of CEO but the elections expert said while Persaud has worked at GECOM for well over 10 years, his experience acquired on the job must be closely analyzed.

It was pointed out that while Persaud worked at the Elections Commission for more than 10 years, for the majority of that period he served as the Public Relations Officer (PRO) and Spokesperson to the Chairman of GECOM.

“Now is that experience in senior management position or overseeing and directing diverse operations? Is that so? Is that 10 years in the management of national elections and elections system? My answer is no!” the expert said.

Persaud was first appointed in 2001 as the Public Relations Officer (PRO). In 2014, he was appointed substantive DCEO, however, when his contract expired in August 2017, it was not renewed, though efforts were made to do so. As such, it can be deduced that Persaud only served in a senior management position for a period of three years while at the Elections Commission.

On his profile, he described himself as “a qualified, strategic and results-oriented professional with over 15 years of demonstrated success in optimizing electoral planning, management and implementation.”

Notably, Deodat Persaud, who is a Commissioner at the Ethnic Relations Commission (ERC), on his Linked-In profile, indicates that he has been an Assistant Registration Officer since December 2005 – more than 16 years. He has a Master of Business Administration and a Master’s Degree in Public Administration from the University of Guyana.

Meanwhile, Petty brings with him a rich electoral history. According to the Organization of American States (OAS), Petty, who hails from St. Kitts and Nevis, formed part of a three-member mission that observed elections in Guyana in May, 2006. Petty is a former Elections Supervisor in St. Kitts and Nevis and frequent election observer, the OAS said at the time. In 2018, he served as the Director of the CARIFORUM Directorate. Additionally, from 2004-2018, he served as the Cooperation Director, Development at the Caribbean Community (CARICOM) Climate Change Centre.

Meanwhile, Harrow is the Director-General of Jamaica’s Office of Disaster Preparedness and Emergency Management (ODPEM) and Regional Manager at the Electoral Commission of Jamaica. He has a Professional Masters in Operations Management from the City and Guild of London Institute and an Executive Masters of Business Administration from the Commonwealth of Learning/University of the Commonwealth Caribbean (UCC).

Candidates have also been shortlisted for the posts of Legal Officer, Chief Accountant, Civic and Voter Education Manager and Logistics Manager.

Sun Nov 28 , 2021
Support Village Voice News With a Donation of Your Choice. The Alliance For Change has joined several other groups and individuals in criticizing Culture Minister, Charles Ramson jr for saying African Guyanese have no role models while elevating a shadowy, fly-by-night company owned by the Hits and Jams and the Kashif and Shanghai owners as an example of good entrepreneurial […]