(BBC NEWS) Colombian President Iván Duque has condemned the actions of police cadets who dressed as Nazis as part of a ceremony meant to honour Germany.

“Any apology for Nazism is unacceptable,” Mr Duque said on Friday.

Hitler’s campaign to eradicate Europe’s Jewish population and other minorities became known as the Holocaust.

Images from the ceremony at the police academy in the city of Tuluá earlier this week showed Nazi flags and other regalia on display, while cadets were seen wearing Swastika armbands – and one also appeared to be wearing a Hitler moustache.

Police officers in Colombian uniforms were also pictured opening the event by cutting a ribbon.

“I condemn any demonstration that uses or refers to symbols associated with those responsible for the Jewish Holocaust,” Mr Duque wrote on Twitter.

He said those involved in organising the police event in Tuluá, western Colombia, and any participants would be held to account.

The head of the academy has already been sacked.

The official police Twitter account that posted the images said the event in Tuluá was organised as part of an “international week” aimed at “strengthening the knowledge of our police students”.

The ambassadors of Germany and Israel have urged Colombia to do more to educate people about the Holocaust.

Covid: WHO says it is very worried about Europe surge

Sun Nov 21 , 2021
Support Village Voice News With a Donation of Your Choice. (BBC NEWS) The WHO said an increase in mask wearing could immediately help The World Health Organization is “very worried” about the spread of Covid-19 in Europe as the continent battles a fresh wave of infections. Speaking to the BBC, regional director Dr Hans Kluge warned that 500,000 more deaths […] 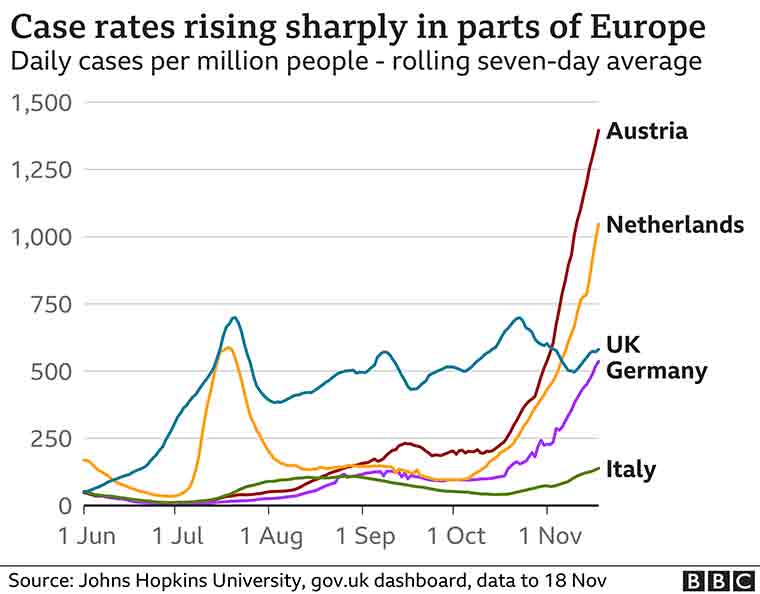