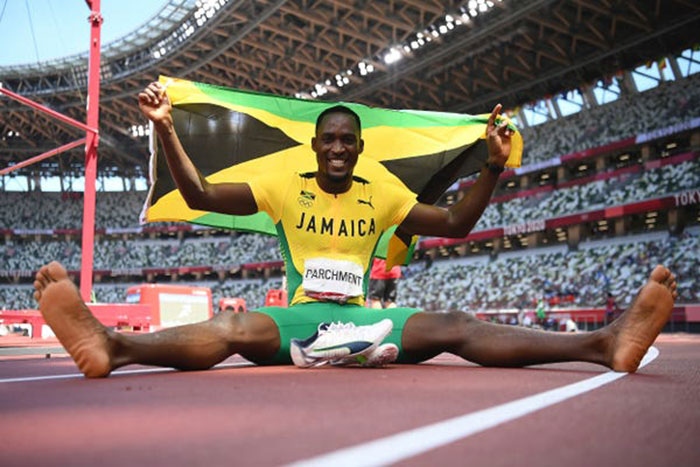 KINGSTON, Jamaica (CMC) — Olympic 110 metres hurdles champion Hansle Parchment of Jamaica said he would like to finish his track and field career at the Paris Olympics in three years’ time.

Parchment, 31, produced the third-fastest time of his career of 13.04 seconds to upset American favourite Grant Holloway to win the gold medal at this year’s Tokyo Olympics.

Now that he has one of his personal goals, Parchment said he hoped to stay in the forefront of sprint hurdling as long as he can. “I feel like, for hurdlers, we can go a little longer, it doesn’t require that much fast running to get the right times, it’s more technique and execution,” he said in a feature article on the website of World Athletics, the sport’s world governing body. “My plan is not to go past 2024; that is where I’d cap things off.”

Parchment is the oldest man to win Olympic gold in the sprint hurdles and he, like female sprinter Shericka Jackson, said the timing of the Games in Tokyo was perfect because it allowed him a chance to heal a couple of injuries. “In 2019, after [Olympic] trials I did nothing and 2020 was almost a blank season,” he said. “Mostly, we weren’t even training because of lockdown and the tracks being closed. The rest was so good for me because sometimes those injuries are not going away.”

Parchment said returning to Jamaica after the Games was exciting, but he will continue to focus on getting better. “Lots of excitement, lots of celebration,” he said about his return to Jamaica. “I had to leave home a little earlier than expected to get back in the groove of training and racing.

“We had a whole parade through my home town, and everyone came to support. It was just awesome.”

He said, “A gold [medal]changes everything, trust me, but I feel like everybody else is more excited than I am, because I’ve been thinking of this for so long. “I’ve been in shape to do this so many times, but I have been stopped by injuries and I feel sometimes that’s been my own doing.”

Pity the nation, that acclaims the bully as hero

Sun Oct 3 , 2021
Support Village Voice News With a Donation of Your Choice. Dear Editor, I am by nature an optimist and that optimism in spite of ominous clouds hovering over my beloved country remains intact. However, responsible citizens must continue to use the media, their religious organisations and every opportunity to speak up and so persuade certain sections of a Government that […]