The Guyana Trades Union Congress (GTUC) extends Phagwah greetings to all Guyanese, particularly our Hindu brothers and sisters. As a nation of many peoples, and historically from diverse cultures, it remains a mark of significant advancement Guyanese of all walks of life are celebrating the Holi Festival as a calendar event. Such achievement, attained during the Forbes Burnham government, remains a signal to the world that Guyana is home to religious freedom and the government could set the tone for respecting the fundamental rights and freedoms of all.

As all Guyanese mark this auspicious event on the Hindu Calendar, which exemplifies new beginnings and concomitant benefits of the season as reflected in nature, the same must be for Guyana. GTUC uses this opportunity to call on the Government, particularly those leaders of Hindu faith, to deliver to this nation what spring represents. Guyana needs a new national political culture. A culture that would build on the freedoms and rights enshrined in the Constitution of Guyana which are the entitlement of all Guyanese.

Therefore, let this Holi Festival see the beginning of similar manifestation in daily governance. GTUC calls for a progressive approach to the management of the nation’s affairs, built on the political system of “inclusionary democracy” as expressly outlined in Article 13 of the Constitution. Guyanese demand the politics of inclusion to triumph over the politics of evil, hate, marginalisation, discrimination, division and ethnic tension.
The environment of socio-economic, cultural and political dysfunction is hindering citizens/workers’ desire to establish and maintain relations across the ethnic and political divide. Workers deserve an environment of peace and harmony, buttressed by equal opportunities, which are necessary for development. It is not a case where persons are not aware or knowledgeable about the challenges we face, but they know fixing these requires collective political and ethnic will.  Thus, collectively we the citizens/workers of Guyana must demand of our political leadership that they join with us to build the society we deserve.
Happy Phagwah!

Thu Mar 17 , 2022
Support Village Voice News With a Donation of Your Choice. Some 35 Schools Welfare Officers are now certified to provide psychosocial support to children in schools, the Ministry of Education has said. During a small ceremony at the Pegasus Hotel Thursday morning, the Welfare Officers graduated from a European Union (EU) funded Gender Responsive Programme for Psychosocial Support to Children […] 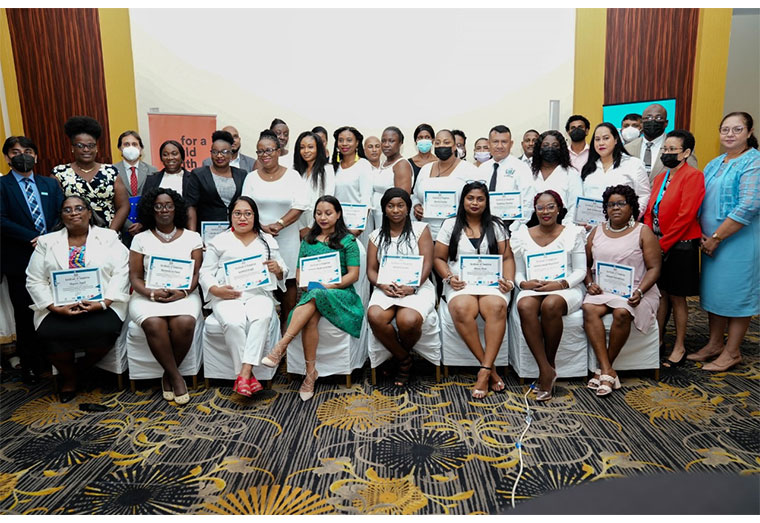