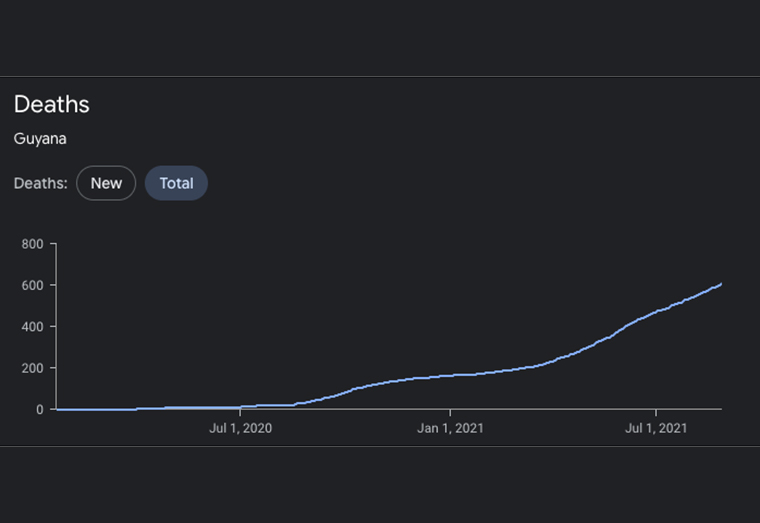 Over 255 females and over 362 males have died from COVID-19 in Guyana since August 2, 2020, when the current Government took office. This Government has faced the brunt of the pandemic as the spread of the coronavirus rapidly increased in Guyana as time progressed with deaths peaking at 98 in May 2021.

Under the former Administration, 21 deaths were recorded between March 11 to July 30, but there were deaths noted in Regions 1, 6, 7, 9 and 10 indicating that the virus had already begun to spread from the first case and death noted on March 11.

During the initial stage, as the world collectively learned about the virus, COVID-19 testing was not readily available in Guyana. Test kits were donated by organisations like the Pan American Health Organisation/World Health Organisation (PAHO/WHO) and there was spared testing with priority given to persons who were experiencing symptoms of the virus.

Health experts like PAHO/WHO’s Dr. William Adu-Krow expressed concerns about wasting the limited test kits as well as concerns about too little testing. As time progressed, mobile testing was introduced in April 2020 and testing for the virus slightly increased.

Under the current Administration, testing increased significantly, but so did COVID-19 deaths — even with strict Emergency Measures in place. The gazetted restrictions and stay-at-home order fluctuated over time, catering to exemptions for certain operations and entities which could not completely shut down.

More and more, citizens were educated about the virus and how best to protect themselves. It became common to see persons with facemasks and hand washing areas, sanitizers and infrared thermometers at the entrance of businesses.

Still, the deaths began to climb. In fact, prior to Guyana’s first administration of a COVID-19 vaccine on February 11, 2021, over 184 had died. Acquiring and administering vaccines took time and, though over 300,000 have received their first jab and over 150,000 have had their second, since the arrival of the vaccines, over 425 have died from the virus.

The Ministry of Health has maintained that no person who was fully vaccinated against COVID-19 has died from the virus but a small percentage of those who received only one jab have.

Recently, in June 2021, it was revealed that an analysis of 202 of the then 454 COVID-19 deaths showed that 36.6 per cent were Afro-Guyanese “60 percent of the deaths at Liliendaal since April is from our Afro-Guyanese family,” Head of Medical Services and Cardiology at the Georgetown Public Hospital, Dr. Mahendra Carpen also noted.

Even with vaccines available to the public, the rate of COVID-19 deaths in Guyana has not been reduced to low levels. There has been a decline in monthly deaths each month from May’s peak of 98 but the decline has not been significant.

Altogether, Guyana has experienced over 24,000 positive cases and over 609 deaths across the period of 535 days. This therefore gives the country a record of more COVID-19 deaths than days since the emergence of the virus locally.

Mon Aug 30 , 2021
Support Village Voice News With a Donation of Your Choice. There is talk there is likely to be Local Government Elections soon. Last Friday, Leader of the Opposition Joseph Harmon called for a new Voters List for the Local Government Elections. One of the major concerns about the 2020 List was how bloated it was.  In a population of approximately 750,000 […]