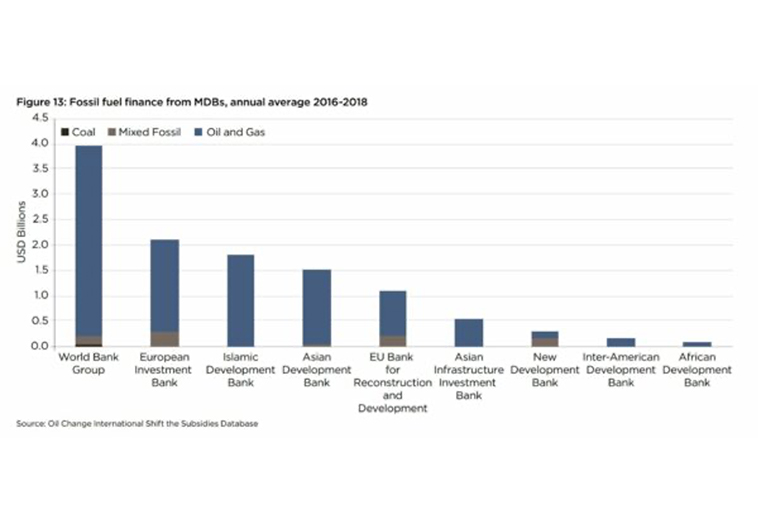 The US Treasury has instructed representatives at multilateral development banks [MDS] to support clean energy projects over fossil fuels, putting the fate of several gas projects in the balance.  The guidance issued this week rules out US support for coal and oil across the value chain and gas production – with rare exceptions for oil use in a humanitarian crisis or as backup for off-grid clean energy.

It calls on MDB staff to prioritise clean energy investments in low and middle-income countries and “only consider fossil fuels if [cleaner options] are unfeasible”. The announcement was widely welcomed as a critical step forward in accelerating the end of public finance for fossil fuels. The US is the largest shareholder across the MDB system. However, under certain conditions, support for gas infrastructure may continue in fragile and conflict-affected countries or in small island developing states.

Analysis will need to show there is no feasible clean energy alternative and the project would have a significant positive impact on energy access and development while being aligned with the Paris Agreement.

Maria Pastukhova, of think tank E3G, said the guidance effectively ends US support for fossil fuels in middle-income countries at the MDBs – a move she described as “a game-changer in making public fossil finance phaseout a new global norm”.

Jake Schmidt, who heads the international climate programme at the Natural Resources Defense Council, told Climate Home the threshold for gas pipelines, gas-fired power plants and LNG terminals to receive US support was “quite rigorous” and, if effectively implemented, “none or very few projects will be able to meet the criteria”.

“This will significantly dry up the pipeline for oil and gas and will make any projects that eschew the guidelines very difficult, if not impossible, to get through,” he said, adding that the banks were unlikely to spend political capital on pushing for projects opposed by the US.

One project which is unlikely to pass the criteria for US support is the Hin Kong gas plant in Thailand, Bronwen Tucker, research analyst at Oil Change International, told Climate Home. The 1,400 MW plant is being considered for support by the Asian Development Bank, where the US is the joint largest shareholder with Japan, on 13% of voting power each.

South African utility Eskom’s plan to transition away from coal could also be affected. Eskom is considering more than 8GW of projects, including 4GW of gas-fired power. US opposition would make it harder for Eskom to get investment from the World Bank and African Development Bank for gas.

Analysis by Oil Change International shows that up to 40% of fossil fuel finance by MDBs from 2018 to 2020 — or $1.6bn per year — went to gas projects that could be eligible for support under the guidelines, depending on the interpretation of the exemption clauses.

“There is still a need for the US to improve its policy,” Laurie van der Burg, senior campaigner at Oil Change International, told Climate Home. “There is no space for new gas infrastructure if we want to keep global heating below 1.5C.”

Van der Burg added that allowing gas support to low-income countries in some circumstances was “particularly problematic” and would “lock in outdated energy infrastructure” in places that needed investment in clean alternatives the most.

In a letter to Treasury secretary Janet Yellen, grassroots organisations from developing countries asked for clear guidelines on implementation of the guidance document, calling on the US to oppose all fossil fuel projects across the value chain.

While a growing number of MDBs have adopted policies to end support for coal, investments in oil and particularly gas have increased in recent years. “There is a big dash for gas in developing countries and public finance for gas is increasing,” Lucile Dufour, senior policy advisor at the International Institute for Sustainable Development (IISD), told Climate Home.

Between 2016 and 2018, MDB support for fossil fuels was dominated by oil and gas, averaging $10.6 billion a year or more than 26% of all energy finance. From 2018 to 2020, gas made up more than 75% of MDB fossil fuel support, according to analysis of Energy Policy Tracker data by the Big Shift Global campaign.

Dufour said it was “disappointing” that the rules left the door open for gas finance and that the US should close the loophole to be a climate leader.

As part of its policy, the UK committed to “work to convene a vision” for how to “accelerate the energy transition by collectively shifting international support from all forms of fossil fuels to clean energy”. The Cop26 host has made ending public finance support for fossil fuels a key issue at the climate talks in Glasgow in November.

Joe Biden’s administration is expected to release further guidelines in the coming weeks to bilateral agencies, including the Development Finance Corporation and the US export credit agency Exim.

Sat Aug 21 , 2021
Support Village Voice News With a Donation of Your Choice. Neem Leaf-  Neem has long been used for its medicinal and culinary properties. It is also known to be used as a deterrent to pests. This medicinal herb has a bitter taste and strong odour that may keep the bugs away from your plants, but non-toxic to animals, birds, plants […]