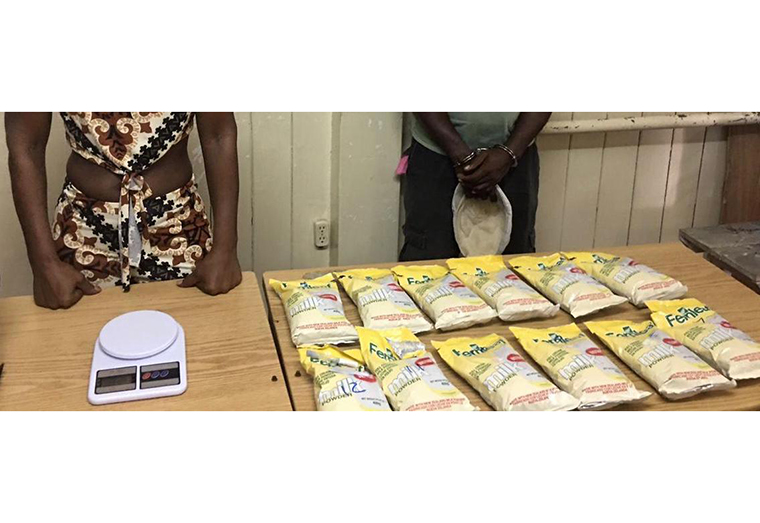 Police on Monday morning busted a woman at the Ogle Airport with cocaine in several milk packets.

In a statement the Guyana Police  Force said that around 10:10hrs a search as conducted at the Eugene F. Correia International Airport Ogle on the luggage of a 34-year-old self-employed female of New Street Cumberland, Canje who was at the time an outgoing passenger on Caribbean Airlines flight BW 217 destined for Barbados.

The search was prompted after the woman was seen acting in a suspicious manner. A search was carried out on her luggage where a law enforcement rank found several Fernleaf packets of milk among clothing and other stuff.

As a result of the discovery made, the rank opened and tested the contents of two of the Fernleaf packets, using the Narcotic testing kit, during which there was an indication of a narcotic suspected to be Cocaine.

As a result, the female suspect was told of the offence committed, arrested and cautioned. Initially she remained silent but subsequently she claimed that someone (male, name withheld) had given her the items to drop to Barbados.
As a result of this new information, the second suspect was contacted, told of the offence, arrested and cautioned. He admitted giving the woman the stuff but denied knowing about the suspected narcotics (cocaine).

They were both escorted to the Criminal Investigations Department Narcotics Branch and placed in custody.
The suspected cocaine was weighed and it amounted to 4.873kg. Investigations are ongoing.

Tue Aug 17 , 2021
Support Village Voice News With a Donation of Your Choice. …pregnant women should now seek medical approval first …breastfeeding women only exempted for up to six months The Ministry of Health has made public yet another update on the ‘Information for COVID-19 Vaccination Exemption’ now advising pregnant women to receive clearance from their doctor prior to being vaccinated — a […]