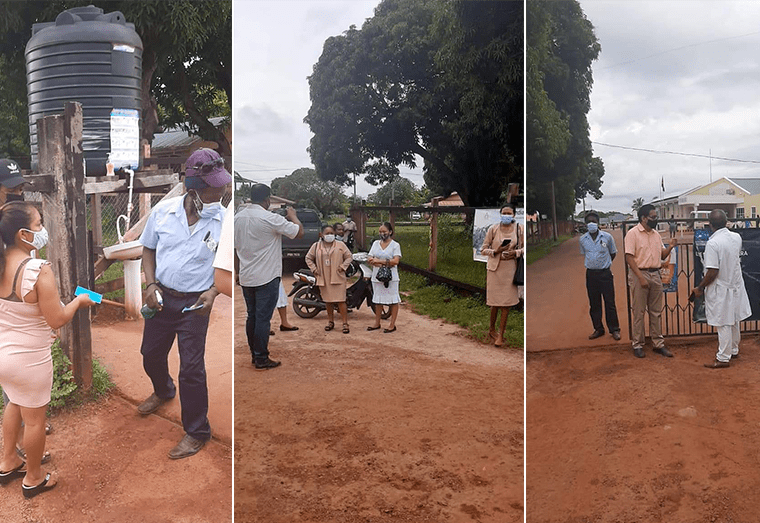 An attempt by the Leader of the Opposition, Joseph Harmon on Monday to have the House discuss government’s imposition of the COVID-19 vaccine on Guyanese as a matter of urgent importance was disallowed by the Speaker of the National Assembly, Manzoor Nadir.

In an accordance with Standing Order 12 (2), Harmon sought leave to move the adjournment of the National Assembly to discuss Government’s Vaccination Policy as a matter of urgent public importance. The issue is also the subject of a motion tabled by the Opposition Leader.

“I wish to discuss the imposition by the government of the undue restrictions that are placed on Guyanese, who are unvaccinated by virtue of the COVID-19 Gazetted measures published on the 29th July, 2021,” Harmon told the House.

The new measures, which now require unvaccinated persons to make appointments to visit government ministries and agencies, took effect on August 1. These measures, Harmon said, are severely hampering the ability of the people of Guyana to access public and government services.

Pointing to the Ministry of Health, the Opposition Leader said that government ministries and agencies have instituted additional requirements in breach of the Order, placing even more hardship on the Guyanese people.

He said while the Order mandates that any member of the public who wishes to enter a ministry or government agency to access a service shall be vaccinated, and that unvaccinated persons may only do so by way of appointments, ministries and agencies are now requiring persons to have COVID-19 test results.

He said the added imposition is causing significant difficulties for the Guyanese people, and ought to be addressed as a matter of national importance.

“This morning we got a report from Lethem that a surgeon, who was going to the hospital to perform surgery was locked out of the hospital,” he pointed out.

Harmon said as of July 30, 2021, less than 50 per cent of Guyana’s population was vaccinated, and as such a large percentage of the country’s population is affected by the impositions.

“Mr. Speaker these measures are now going to have a significant impact on a large section of our population who are not yet vaccinated, and I say that this is a matter of urgent public interest, and I ask Mr. Speaker that you grant us leave to have this motion dealt with later on in the day,” Harmon reasoned.

But the Speaker, told the House that while the matter is of importance, it is not urgent.

“I have concluded that it is important. The access to our citizens to services of the government is a very important matter. The issue here is urgency, and what we have is an ongoing issue, which under all of the rules that apply to urgency under the Standing Orders, it doesn’t apply. And so I would not be able to allow your request,” the Speaker said in his ruling.

An attempt by former Minister within the Ministry of Health, Dr. Karen Cummings, to weigh in on the issue, was also shut down by the Speaker.

In the capital city, Georgetown, and in Linden, Region 10 persons have been constantly protesting the imposition of the vaccine on the masses.

Mon Aug 9 , 2021
Support Village Voice News With a Donation of Your Choice. ….Opposition claims this being done through borrowing … US $436 million now in NRF Guyana now has over US $436 million in its Natural Resource Fund (NRF) stemming from the completion of seven million-barrel lifts, royalties and interest. Minister of Natural Resources, Vickram Bharrat made this announcement in the National […]