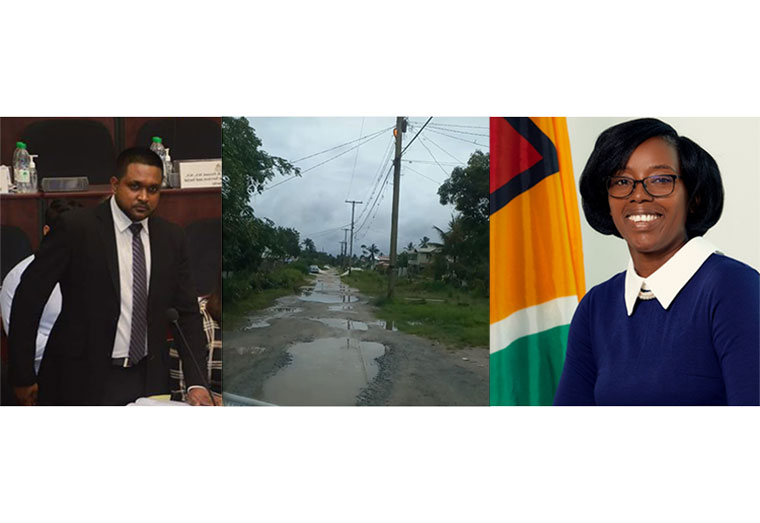 Minister of Local Government and Regional Development, Nigel Dharamlall misled the National Assembly, during the Budget Debates, when he told the House that Burnham Boulevard was among roads done in Mocha, on the East Bank of Demerara by the People’s Progressive Party/Civic (PPP/C) Government since its return to power.

However, the road, which is currently in a deplorable state, is still to be done. “In 2020 and 2021… we did three streets in Mocha, including…Burnham Boulevard. We did it,” Minister Dharamlall told the National Assembly on February 4, 2022 as he lashed out at the A Partnership for National Unity + Alliance For Change (APNU+AFC).

But days later, on February 9, the Local Government Minister, when confronted with the truth sought to lay blame on the Mocha Arcadia Neighbourhood Democratic Council (NDC). It was APNU+AFC Member of Parliament, Nima Flue-Bess, who confronted Minister Dharamlall on the matter during the consideration of the Budget Estimates for Region Four (Demerara-Mahaica). Pointing to Line Item 1400700 (Roads) under Programme 743 Public Works (Capital Expenditure), for which $134M was budgeted for the construction of roads, MP Flue-Bess questioned whether Burnham Boulevard and Barnwell North Main Road would be among roads finally to be done in Mocha.

As he stood to his feet grinning, Minister Dharamlall sought to lecture the APNU+AFC MPs on the importance of loyalty to leadership, as he referenced to the Founder of the People’s National Congress Reform (PNCR), Linden Forbes Sampson Burnham, Guyana’s first Executive President.

But before he could continue, the Speaker, Manzoor Nadir instructed him to simply answer the question.

“We are going to build an asphaltic Cemetery Road in Mocha this year,” the Local Government Minister told the Committee of Supply of the National Assembly. However, realising that Burnham Boulevard had not been upgraded, Minister Dharamlall then sought to lay blame on the Mocha Arcadia NDC.

“…resources were placed in the Mocha NDC and they indicated to me as Minister of Local Government and Regional Development that as part of the maintenance programme of the Mocha Arcadia that the same Burnham Boulevard was one of the roads, they were going to do,” he explained.

But MP Flue-Bess rubbished the explanation offered by the Local Government Minister.

“As a sitting Member of Parliament and a resident of the Mocha Arcadia Community, I find it very disrespectful that a sitting Minister of Government can stand in the Parliament and lie about the completion of a project which was not done and still needs to be done. The Minister needs to let the people of Mocha Arcadia and the nation know where the monies are for the road that was done. He needs to find the money and complete the project immediately,” MP Flue-Bess told the Village Voice Newspaper.

In a letter dated April 7, 2021, Chairman of the Mocha Arcadia NDC, Rudolph Adams submitted a list of nine (9) roads and four (4) bridges that required urgent repairs to Minister within the Ministry of Local Government and Regional Development, Annand Persaud. Among the roads listed were Burnham Boulevard, Cemetery Road, Sideline Dam, Barnwell North Main Road and Dawson Street. However, the Village Voice Newspaper understands that Burnham Boulevard was repeatedly removed from the list by the Local Government Ministry.

The Mocha Arcadia NDC Chairman told this newspaper that with an annual subvention of $5M, the NDC does not have the capacity to execute capital works, such as construction of asphaltic roads, and as such assistance was sought from the Regional Democratic Council, Ministry of Local Government and the Ministry of Public Works but to no avail.

According to him, in 2020 and 2021 Minister Persaud committed to having Burnham Boulevard done. “Unfortunately, the road was actually pulled from the list not once but twice,” Adams said.

He said Minister Dharamlall’s pronouncements in the National Assembly that Burnham Boulevard had been done, “came as a shock to us.” “The NDC does not have the capacity to do the road, so how could we tell the Minister that we would do the road at the NDC level,” he added.

The NDC Chairman complained too that since the return of the PPP/C to Government, the Local Government Ministry has been mandating that the Councils purchase $2M in crusher run and $500,000 in Street Lights. “That affected our work programme because we had intended to do some drains and works on the burial ground; we had to abandon that,” he complained.

Region Four RDC Chairman, Daniel Seeram told the Village Voice Newspaper that the RDC included Burnham Boulevard in its proposed budget for 2021 but it was removed from the proposal at the level of the Ministry. “We would have seen not only the Burnham Boulevard [being removed] but I had put in for a farm-to-market road between Mocha and Barnwell, because there are a lot of farming done in that area, and it was taken out by the Ministry,” he said.

In 2022 the Council was reportedly excluded from the 2022 budgetary process.

TIGI denies being biased against PPP

Sun Feb 13 , 2022
Support Village Voice News With a Donation of Your Choice. —says enough evidence of things going awry to throw at every government The Local chapter of Transparency International, a globally recognised institution that serves as the watchdogs of corruption has responded to Guyana’s Vice President, Bharrat Jagdeo, who recently accused the independent organisation of being biased against his government. In […] 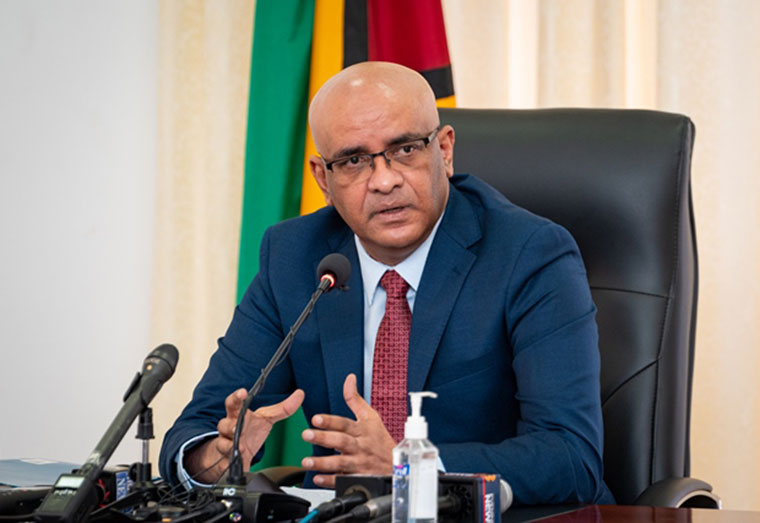