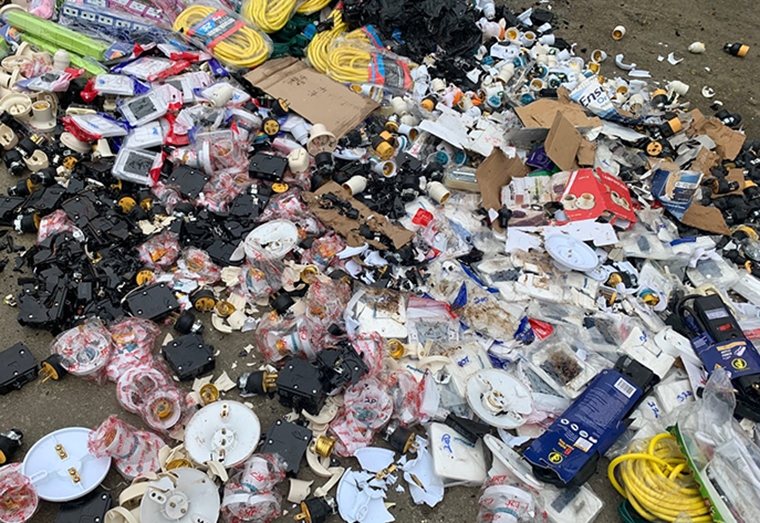 … items confiscated from stores in Regions 3 and 4

Inspectors of the Guyana National Bureau of Standards (GNBS) Product Compliance Department seized and destroyed 6,867 pieces of substandard electrical products on Monday which were deemed to be inferior and susceptible to causing losses or injury to consumers.

The items seized included breakers, lamp holders, power cords, receptacles, power outlets, knife switches and surge protective devices. They were seized from sale outlets in Regions Three and Four for failing to comply with the requirements of the mandatory national standards.

According to the GNBS, some of the items confiscated and destroyed were found to be without any label while others did not specify the country origin; certification marks to prove that they were tested by an independent laboratory for quality were missing from labels, and for others, there were no directions for use.

“There were a large number of inferior power cords and power strips incorrectly labelled as surge protective devices while they did not have such protection capability. Most of these non-conforming items were placed on hold by the GNBS for inspection,” the GNBS stated.

During this period, importers and dealers were given the opportunity to submit test certificates, and in some cases, declarations on conformity of origin. Some importers could not provide the requisite documents, which are based on the minimum requirements established by the respective mandatory National Standards. 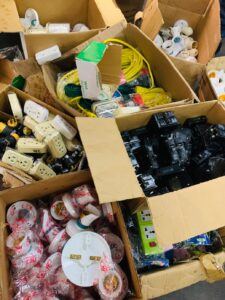 Test Certificates from independent/ third-party laboratories are required for products that do not have standard marks, which indicate that they were tested and conform to a standard. Meanwhile, declarations of conformity of origin are needed for products that have no indication of the country in which they were manufactured.

To avoid seizure of items, importers and dealers are reminded to register with the GNBS, submit samples of new products for approval before importation and ensure inspectors of the GNBS examine consignments of commodities before clearance and sale in the country.

Importers are also advised to purchase from sources known for producing quality products and those that are able to issue warranties that could be easily passed on to consumers. In addition, imported products should bear a national or international certification mark from a recognised independent Testing Body in the country of origin, or a certificate of quality compliance should be submitted to the GNBS to verify the quality of products imported.

Meanwhile, all labels, brochures, instruction manuals, leaflets, etc., which are associated with products, should be written in English Language and accompany the product at the time of sale.

Finally, importers and dealers are also urged to check their products received to ensure conformance to the quality specification and to detect any deterioration in quality or other damages during storage and transportation.

For consumers, while some of the substandard items may cost less, the GNBS urged consumers to purchase items that are correctly labelled and suitable for the required use.

The GNBS recommends the purchase of electrical equipment and fittings under the careful guidance of a certified electrician who is keen on using the best quality items. Such careful actions can reduce damages to household appliances and property due to fires.

Copies of the various Standards for Electrical Products can be purchased from the GNBS Head Office at Exhibition Site, Sophia.

Tue Jul 20 , 2021
Support Village Voice News With a Donation of Your Choice. …or negative Covid-19 test The Private Sector Commission (PSC) has expressed its agreement with Advisor to the Minister of Health, Dr. Leslie Ramsammy that there should be consequences for persons who refuse to be COVID-19 vaccinated. Furthermore, the PSC stated that it supports businesses making it mandatory for employees to […] 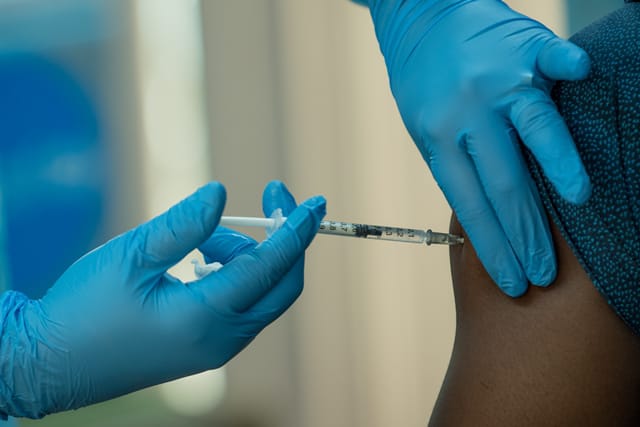