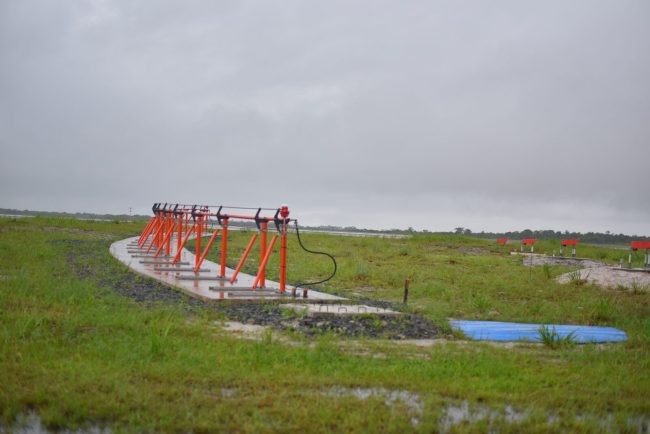 Aircraft flying into the Cheddi Jagan International Airport (CJIA) in poor visibility conditions will soon be guided in more safely when the recently installed and tested $200 million Instrument Landing System (ILS) at the airport comes on stream.

CJIA’s Manager of Air Traffic Services (Ag.), Mr. Trevor Daly told DPI that the new system will ensure better line of sight of the runway for approaching aircraft.  “What the ILS will do for us is to give the pilot the necessary guidance to get his aircraft closer to the runway to effect a safe landing,” Mr. Daly said. Poor weather conditions sometimes make it difficult for aircraft to land at CJIA.

“We currently have several aircraft conducting missed approaches and some having to go to an alternate airport simply because the low cloud conditions and poor visibility and the pilot doesn’t have sufficient guidance to bring him to a point where he can see the runway and land.”

Mr. Daly said the ILS transmits two radio frequencies to aircrafts approaching the runway at CJIA, which then guides the plane to safe landing.   He explained that the overlapping frequencies provide both horizontal and vertical guidance from nearly 100 feet above the runway. This is 400 feet closer than what pilots experience during adverse weather conditions at there.

Meanwhile, Director of Air Navigation Services (Ag), Mr. Roy Sukhoo said civil works were done at the airport to accommodate the ILS.  “The ILS was installed, which is made up of two basic components, that is the localised and glide path. So, we needed some extra land area to the north for the localiser and we needed some land near the south for the glide path and other facilities there.” The land was preparation works were done and installation began in December 2020. In keeping with local and international regulations, the ILS was installed and tested via a flight check.

“The flight check involves an airplane which is called a flight check aircraft. It has specific equipment onboard and this aircraft flies several circuits around the ILS… These tests are done at different distances from Timehri and then overhead Timehri or overhead the ILS itself,” the Director said. Mr. Sukhoo said the ILS is awaiting certification from the international company that installed it. Following the completion of CJIA’s modernisation project this year, the ILS will be fully online to improve the safety of travellers. (DPI)

Mon Jun 28 , 2021
Support Village Voice News With a Donation of Your Choice. The Ministry of Health on Saturday reported three more Covid deaths and 100 new cases. The deaths pushed the total figure to 462 persons. As of June 26, 2021, the country recorded 19, 774 confirmed COVID-19 cases, among them, 100 new cases. The Health Ministry said 19 persons are currently […]