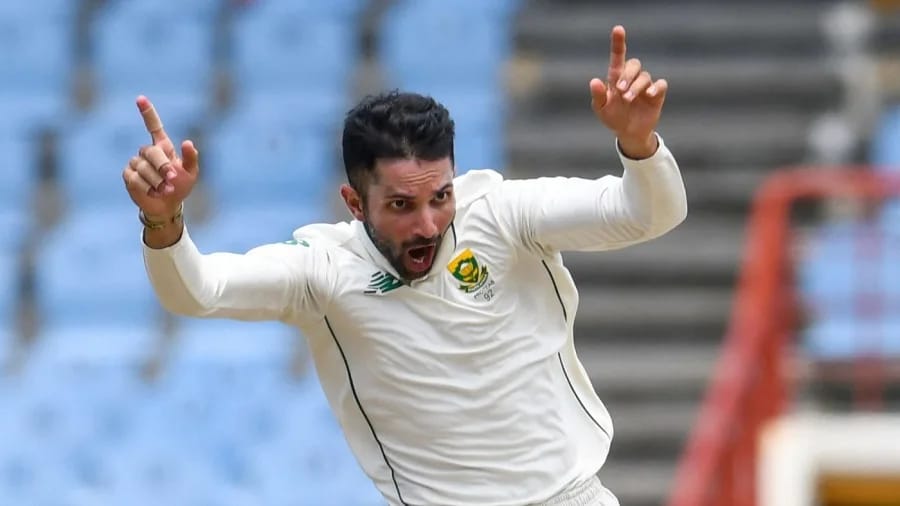 (CRICINFO) Keshav Maharaj took a hat-trick to help South Africa complete their first series win away from home in more than four years, since they beat New Zealand in March 2017. Maharaj is only the second South African to take a Test hat-trick and put South Africa’s result beyond doubt with a triple-strike in the morning session. They sealed the 2-0 result 33 minutes before tea. This is also South Africa’s first series win on the road under Mark Boucher and second in four series on Boucher’s time in charge, since December 2019.

After setting West Indies 324 runs to win the second Test and square the series, South Africa’s attack chipped away at their line-up and rarely allowed a batter to settle. Kagiso Rabada took the first three wickets before Maharaj’s magic came in the 37th over, his eighth of the day, when he sent back Kieran Powell, Jason Holder and Joshua Da Silva off successful deliveries. With Roston Chase unable to bat because a quad injury, South Africa only needed nine wickets to win the match, with Maharaj finishing with his seventh five-wicket haul of his Test career. As for West Indies, they have not won any of their last three home series.

Rabada and Anrich Nortje began proceedings on the fourth morning and immediately threatened. Nortje almost bowled Kraigg Brathwaite with a delivery that the West Indian captain inside-edged just shy of the stumps and then lured Powell into a drive and beat him. But it was at the other end that the incisions were made.

Brathwaite’s defence was breached when he came half-forward to defend a length ball from Rabada but only managed an outside edge. Dean Elgar took the catch at first slip to end a poor series for Brathwaite and a poor series for opening partnerships on the whole. Brathwaite has managed 28 runs in four Tests, with a top score of 15, while the average opening stand across both teams is 8.14. Only three series in the history of Test cricket have had lower averages for the opening stand.

Rabada kept up the fuller lengths but two overs later, held his length back against Shai Hope, who could not decide between ducking and fending and ended up lobbing the ball to Aiden Markram at second slip. South Africa appealed and then reviewed, with replays confirming Hope had gloved the ball. Rabada could have had two-in-two when he hit Kyle Mayers on the front pad with a full-toss and umpire Joel Wilson gave Mayers out lbw, but Rabada had overstepped.

Mayers went on to share a 64-run stand with Powell, the best in the match for West Indies, before top-edging an attempted pull off Rabada, which flew over the slips. Elgar chased it and completed the catch.

Powell resisted almost alone from there. He brought up his fifty with an edge through third man and reached his highest Test score since October 2018, nine innings ago, but with his wicket, West Indies unravelled. Powell first swept Maharaj to Nortje at deep midwicket. Maharaj then had Holder caught by Keegan Petersen at short leg off his next ball to deepen West Indies’ troubles. And then came the icing on the cake, when Wiaan Mulder grabbed a one-handed chance at leg slip off a Da Silva fend.

West Indies went to lunch on 109 for 6, with only the lower order to come. Kemar Roach and Jermaine Blackwood stayed together for 15.4 overs after the break, with Roach, in particular, playing some aggressive strokes during his 27. Blackwood was the first to go when he pushed at an Ngidi delivery and got an edge that de Kock held on to after diving full length to his right. Three overs later, Roach holed out to long-on, off Maharaj, before Jayden Seales heaved across the line and was caught at deep square leg to finish off a memorable match for Maharaj. With the final wicket, Maharaj became the first South Africa spinner to take a five-wicket haul against West Indies.

Tue Jun 22 , 2021
Support Village Voice News With a Donation of Your Choice. Dear Editor Permit me a few lines in your publication to highlight some issues that I consider of utmost importance. Solid waste management and Tax collection represent two major challenges for the Mayor and City Council (M&CC). I am pleased that responsible business owners who utilise the services provided by […]