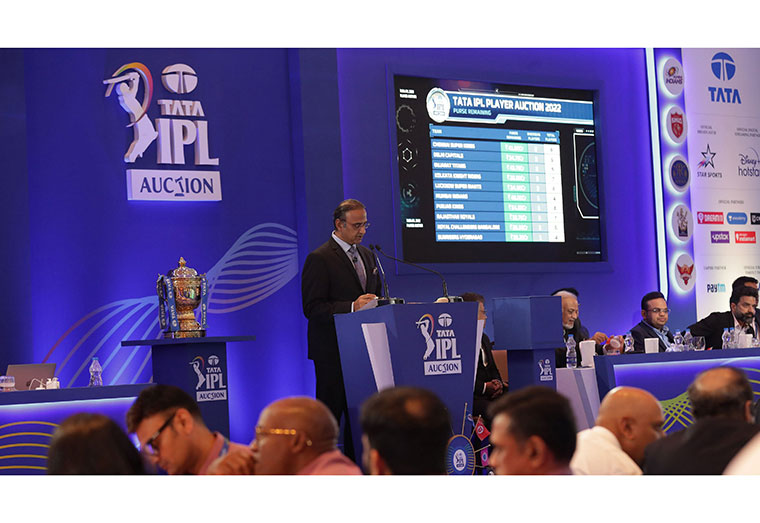 (CRICINFO) Shreyas Iyer and Ishan Kishan were expected to be among the big draws at the IPL 2022 mega auction, and they were.

Iyer became the first to cross the INR 10 crore barrier, a fervent bidding war between a number of teams ending with the middle-order batter and captaincy candidate going to Kolkata Knight Riders for INR 12.25 crore (USD 1.6 million). Later in the day, Mumbai Indians broke the bank for Kishan, making him the fourth-highest earner at any IPL auction at INR 15.25 crore (USD 2.03 million) after beating off competition from Punjab Kings, Gujarat Titans and Sunrisers Hyderabad. It was Mumbai’s first buy of the auction, and came well into the day’s proceedings.

A few more Indian cricketers got in among the big leaguers when Deepak Chahar, who has been an integral part of Chennai Super Kings’ campaigns over the past few years, was bought by the same franchise after a scrap with many other teams, and Delhi Capitals fought off a determined Punjab Kings to get their hands on Shardul Thakur. Super Kings, in fact, entered the fray late for Chahar, after Capitals and Sunrisers had taken the price to INR 11 crore. Rajasthan Royals, too, got in the fight late, but eventually left the race, leaving Super Kings to take back their man for INR 14 crore (USD 1.86 million). That made Chahar the highest-paid Indian bowler at an IPL auction. Thakur went to Capitals for INR 10.75 crore (USD 1.43 million). Avesh Khan also found a lot of takers, but eventually went to a visibly thrilled Lucknow Super Giants for INR 1 crore (USD 1.3 million).

Earlier, in an unfortunate development, after 20 players had found their teams for the upcoming seasons to add to the players retained by the eight existing teams and acquired by the two new teams, the auction had to be paused when Hugh Edmeades, the auctioneer, collapsed on stage during a frenetic battle to buy Wanindu Hasaranga.

A tweet from the IPL said Edmeades’ fall was caused by postural hypotension (a fall in blood pressure). He was quickly attended to by the medical team on site at the Bengaluru hotel where the auction is being held, and was understood to be fine. The auction resumed after a break of over an hour, at 3.45pm IST, with broadcaster Charu Sharma taking over proceedings for the remainder of the first day.

When the auction action resumed, Hasaranga went to Royal Challengers Bangalore, his previous team, for INR 10.75 crore (USD 1.43 million), the price at which the bidding had stopped.

Before the pause, some of the other pre-auction tips attracted big bids too. Among them were Jason Holder and Harshal Patel. Holder, starting at INR 1.5 crore, first attracted the attention of Mumbai and then Super Kings. Mumbai opted out first, and Royals joined in along with Super Giants, who finally got the allrounder at INR 8.75 crore (USD 1.16 million). That was the highest ever bid for a West Indian at IPL auctions. But the record didn’t last too long, with Sunrisers shelling out INR 10.75 crore (USD 1.43 million) for Nicholas Pooran.

Harshal, one of the stars of the last IPL, went back to the team he was part of, Royal Challengers, who fought off interest from Super Kings and Sunrisers to get the medium-pacer at INR 10.75 crore (USD 1.43 million).

Punjab, who started the auction with the biggest purse of the ten teams, splurged straightaway as the marquee players went under the hammer. They bought Shikhar Dhawan and Kagiso Rabada for INR 8.25 crore (USD 1.1 million) and INR 9.25 crore (USD 1.23 million) respectively. Capitals were excited bidders early on, but dropped out of the race for Dhawan and Rabada, as well as Iyer and R Ashwin, all of whom had been part of their roster last season.

In other early updates, Knight Riders kept the paddle up for Pat Cummins, buying back their pace spearhead for INR 7.25 crore (USD 966,000), while Ashwin was sold to Royals for INR 5 crore (USD 666,000), the team also holding firm to get hold of Trent Boult for INR 8 crore (USD 1 million).

Venky Mysore, the Knight Riders CEO, said the franchise had expected to “go higher” to get hold of Cummins, and while he called Iyer a part of the team’s “very long term in terms of our thinking”, the captaincy question was understandably left alone. “That’s a decision the coach and the think tank will take,” he said on the official broadcast during a break in proceedings. “I think we need to just digest the activity of today and tomorrow and take stock. Between Cummins and Shreyas, we have got solid options. But the think tank will take the decision.”

Teams looking to bring back players they have had to let go was a theme early on. Mumbai went after Boult. Super Kings did the same with Faf du Plessis. Neither got their man. The former South Africa captain eventually went to Royal Challengers, their first acquisition of the day, for INR 7 crore (USD 933,000). Could he be their new captain, a position lying vacant after Virat Kohli stepped down in 2021?

Kings bucked the trend and stayed away from the race for Mohammed Shami, who became Gujarat Titans’ first buy at an IPL auction, for INR 6.25 crore (USD 833,000). Mumbai entered the fray late for Quinton de Kock, but he was the first buy of the auction for Super Giants, who secured the South African keeper-batter for INR 6.75 crore (USD 900,000). Capitals did eventually open their account, right at the end of the round of marquee players, getting hold of former Sunrisers Hyderabad captain David Warner, who was a part of Delhi Daredevils once upon a time, for INR 6.25 crore (USD 833,000).

Sunrisers, in fact, didn’t even enter the contest for Warner, who led the team to the title in 2016 but fell out of favour with the franchise more recently, first sacked as captain and then dropped altogether in 2021.

From Kings’ point of view, they might have settled on their opening combination now, Dhawan joining Mayank Agarwal, who had been retained by the franchise. Similarly, de Kock going to Super Giants, who already had KL Rahul, should settle their top two. Capitals are also in the same boat with Warner added to a roster that already contained Prithvi Shaw.

Devdutt Padikkal was another of the early millionaires, going to Royals for INR 7.75 crore (USD 1.03 million), but the list of unsold players got going in the second round of bidding, with veteran middle-order batters David Miller and Suresh Raina, Steven Smith and the allrounder Mohammad Nabi all failing to attract bidders. They, and other unsold players, can, of course, return to the auction if any of the teams express an interest in them.

Jake Lush McCrum, the Royals CEO, said the franchise had “secured the targets we were looking for”. “To have a world-class spinner [Ashwin] was very important and to back it with a bowler who picks wickets up front [Boult] and a gun batter [Hetmyer], we are really happy with what we have done in the first few rounds.”

Sunrisers, who, along with Mumbai, hadn’t spent anything until the post-lunch session of the auction, finally got going when Washington Sundar’s name came up, and they left Titans, Capitals and Super Giants behind to snap the offspinning allrounder up for INR 8.75 crore (USD 1.16 million). And Krunal Pandya was the next big buy, missing out on joining his brother Hardik at Titans as Super Giants spent INR 8.25 crore (USD 1.1 million) on him.

Though Bhuvneshwar Kumar, Kuldeep Yadav, Yuzvendra Chahal, Dinesh Karthik and Ambati Rayudu, among others, went for relatively modest amounts, a couple of other players did rake in the moolah: Prasidh Krishna went to Royals for INR 10 crore (USD 1.3 million), Nitish Rana was bought back by Knight Riders for INR 8 crore (USD 1.06 million), and Josh Hazlewood was bought by Royal Challengers for INR 7.75 crore (USD 1.03 million).

Abhinav Manohar, the hard-hitting 27-year-old batter from Karnataka invited a bit of a bidding war once the auction moved to uncapped batters, with Knight Riders and Capitals entering the fray to get hold of him before Titans bought him for INR 2.6 crore (USD 345,063). But the hot pick in that category was, as expected, South African batter Dewald Brevis, who enjoyed an impressive Under-19 World Cup recently. He was sold to Mumbai for INR 3 crore (USD 400,000).

Meanwhile, Rahul Tripathi, a Knight Riders player until last season, became the fourth-highest uncapped earner ever in the IPL when Sunrisers bought him for INR 8.5 crore (USD 1.13 million), which placed him only behind K Gowtham (INR 9.25 crore to Super Kings in 2021), Krunal Pandya (INR 8.8 crore to Mumbai in 2018) and Pawan Negi (INR 8.5 crore to Capitals – then Daredevils – in 2016).

Sun Feb 13 , 2022
Support Village Voice News With a Donation of Your Choice. —becomes most expensive West Indian purchased at tournament  (SPORTS MAX) Attacking left-hander Nicholas Pooran was the most expensive West Indian purchase at the 2022 Indian Premier League (IPL) auction which began on Saturday. Pooran went to the Sunrisers Hyderabad franchise for 10.75 crore (USD 1.43 million). The Sunrisers will be […] 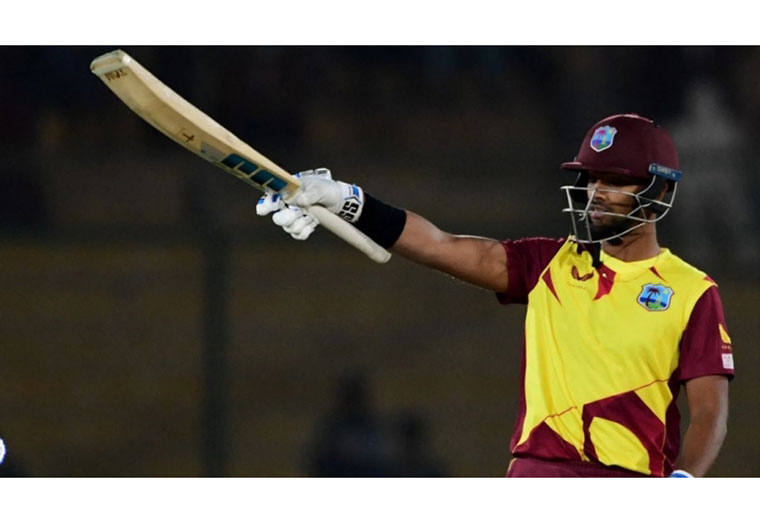