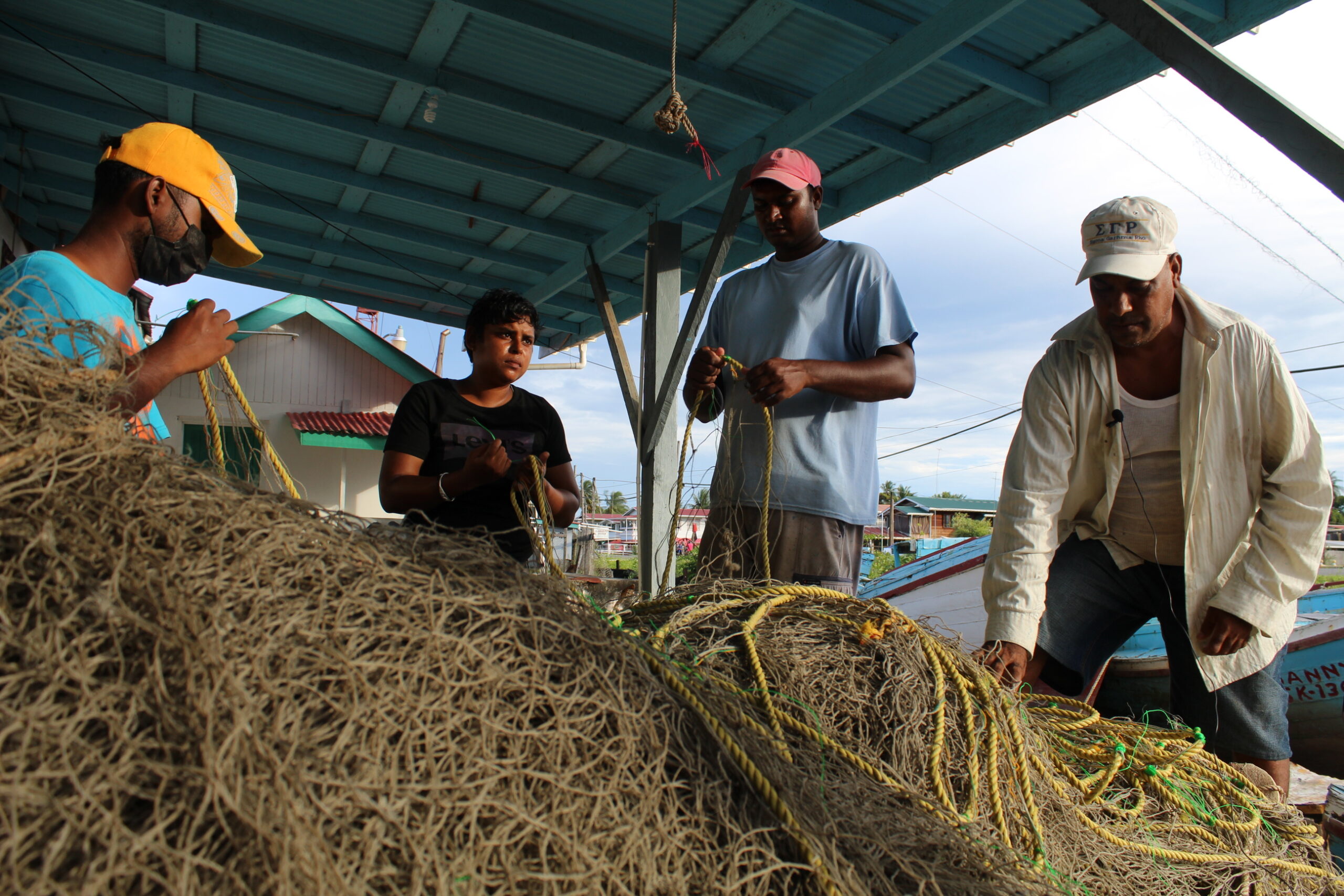 In the fishing industry in Guyana, life on and offshore can be challenging. However, daily, many fisherfolk put fear aside and venture out on the Atlantic Ocean not knowing whether they’ll make a good catch, a limited catch or even be hijacked by pirates.

Others who support the industry spend the day working to build boats, offload fish or balance seine nets so that fishermen are given the best chance for success offshore.

The Village Voice News caught up with workers at the Upper Corentyne Fishermen’s Cooperative Society where the motto is: “We risk our lives to feed the nation with high-quality protein at low cost.”

Nearing 6 PM, the fishermen were no longer there, but busy at work was a team of persons balancing seines that lay about in high mounds.

What is a swine?

Seine is a large fishing net with floats at the top and weights at the bottom edge. A rope called the headline, floatline or corkline is attached at the top edge of the net and floats are attached there to provide buoyancy. It hangs vertically in the water and the ends, when drawn together, encircle the fish. The nets are usually made out of synthetic fibres and twisted or braided into place.

Explaining the importance of balancing the seine to make the sides equal was one of the youngest among the bunch, 28-year Nazmoon Samad.

“When it gets balanced, it works accurately,” she said. “We have top and bottom [parts of the net]. The bottom gets the lead and the top gets the floats. If the lace on the net is not accurate or it’s not on, it’s going to be twisted, it’s not going to work.”

It takes the seine workers about a day and a half and sometimes two days to finish balancing the nets. Boats come in with nets weighing over 2,000 pounds or even as much as 4,000 pounds.
Samad has been working within the fishing business from a young age. “Since I was young I worked here. I started to offload fish for fishermen and then go to school. By coming here I learned this agricultural trade,” she said.

Working on the team also was 42-year-old Daresh Sewdial who has been associated with the fishing business for almost 30 years. He started off working to retrieve fish that were pulled out of the water. He would kill, wash and ice fish, spending about 6-7 days on the boat working with other fishermen.

Sometime after, he moved over to do the same but with seine, spending about 10-13 days offshore. Five persons would venture out, the captain and four sailors. Speaking about the process offshore, he said: “If you don’t wind in at a certain time the fish spoils on you…sometimes the weather is bad so you have to leave the seine — breeze and the water would be rough.” The types of fish they would catch include snapper, gilbacker, shark, cuirass, trout, puffer and more.

Sewdial stopped fishing offshore because of the unpredictability of catch even after days on the ocean. He felt that working with the seine onshore guarantees him a daily income to support himself and his wife.

According to the Food and Agriculture Organization (FAO), in 2017 the fishery sector employed an estimated 8,386 people of which 7,141 were in marine coastal fishing, 1,125 were in inland water fishing and 120 in aquaculture. Many more people benefited indirectly from fishing-related occupations, such as boat building, supply and repair.

The FAO notes that, in Guyana, capture fisheries is undertaken by artisanal fishers and by an industrial fishing fleet composed of trawlers and hand-liners, including some foreign-flagged, licensed vessels. Most of Guyana’s fishing effort occurs in the relatively shallow waters of the continental shelf.

In 2017 the estimated fleet was composed of an estimated 1,498 vessels ranging in size from 6 to 24 meters, of which the great majority (83 percent) were gillnetters.

Sun Jun 6 , 2021
Support Village Voice News With a Donation of Your Choice. (BBC) The Duke and Duchess of Sussex have announced the birth of their second child, a baby girl. Lilibet “Lili” Diana Mountbatten-Windsor was born on Friday morning in a hospital in Santa Barbara, California. Both mother and child are healthy and well, the couple said in a statement. Buckingham Palace […]