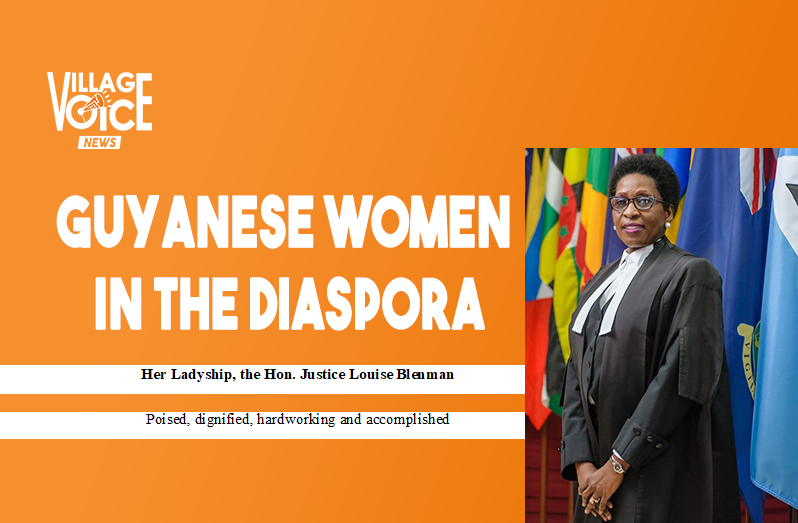 She is properly referred to as Her Ladyship, the Honourable Justice Louise Esther Blenman, and is presently serving as Appeals Court Judge of the Eastern Caribbean Supreme Court. She has been the third female to be so appointed in the Court’s half-century existence. This Court represents six independent states and three British overseas- viz, Antigua and Barbuda, the Commonwealth of Dominica, Grenada, St Kitts and Nevis, St Lucia, St Vincent and the Grenadines, and the three overseas territories, Anguilla, British Virgin Islands, and Montserrat.

But Louise’s achievement as Appellate Justice has not been an overnight story. Herstory is one of making steady steps on the legal pathway, walking and climbing, as opportunities availed themselves.

Whilst in Guyana, Louise taught law at the University of Guyana (1992-2000), shaping young minds for a passion for justice, even as she pursued a practicing legal career. In 1988 she was appointed acting Magistrate, and later that year appointed to work in the Attorney General’s Chambers where she stayed until 1991, serving in several positions, including as acting Deputy Solicitor General. Louise also worked in private practice in her own chambers and as an associate of Rex McKay S.C, one of Guyana’s most prodigious jurists.

2014- Member of the JEI Team at the Fourth High-Level meeting on the “Role of the judiciary in International Commercial Arbitration. “

2020- a member of the three-person webinar panel, hosted by the Organisation of Commonwealth Caribbean Bar Associations, on “Mastering Your Civil Procedures Rules- building a winning case.”

Up-keeping judicial probity
Louise’s peers have publicly noted her outstanding contributions to the court. Her adherence to the etiquette of the bar and spurring her colleagues to collaborate in the best interest of their clients was lauded. Her peers also praised her intellect and hard work; commitment to the integrity and independence of the law (judiciary); steadfast dedication to the settlement of disputes, and the established protocols and professional standards of the bar. And even as she serves as an Appeal Judge she continues to find time to educate members of her fraternity in upholding the probity of the judiciary.

Justice Blenman also finds time to maintain a social media presence, displaying a penchant for sharing positivity and poetry, including from Guyana’s national poet, Martin Carter. It is fitting to say Louise’s personality is best surmised in her February 27, 2020 Facebook post:- “Lighthouses don’t go running all over an island looking for boats to save; they just stand there shining- Anne Lamott.” Indeed, she has been a lighthouse, shining a light on the calibre of women Guyana produces- poised, dignified, hardworking, accomplished, and an asset wherever they live.

No Parliament in two months

Sun Apr 25 , 2021
Support Village Voice News With a Donation of Your Choice. …govt says focused on spending budget, containing Covid …opposition cites lack transparency, has 260 questions   By Svetlana Marshall  The National Assembly of the 12th Parliament of Guyana has not met in close to two months, and it is unclear when a next sitting will be held, though the main Opposition […]