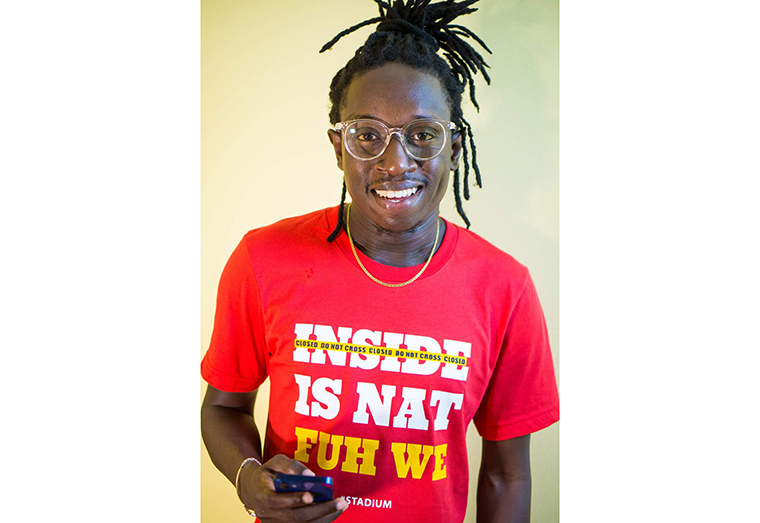 …says spreading the Gospel has no boundary

Amid criticisms from some sects of the Christian community and much buzz on social media about Gospel singer Samuel Medas participating in the 2021 Soca Monarch competition, Medas believes it is his mission to spread the Gospel in as many areas as possible.

The popular Gospel artiste who has traveled the world spreading the Gospel through his music announced two months ago his entry in the soca competition. His entry ‘Stadium’ emerged victorious following a strong social media liking. But being crowned the 2021 Soca Monarch did not sit well with some in the Christian community who believe that Medas’ should only use his ‘gift’ in the church.

Medas holds a different view. In an interview with the Village Voice News, the artiste said, “I think as a flat out Christian, and one with a gift and with influence, it is appropriate to go into any arena and carry the message of the gospel. And anybody can challenge me on that.”

The singer explained that persons within the Christian community have grown accustom to being confined to the church that “when we actually see somebody being a real Christian it’s shocking.”

“Title or no title…we have a job to do. Since my first interview after announcing I’d be in Soca Monarch, I said that I don’t like conflict and being a point of controversy. But it happened and I had to be very mature about it. Yes, I did expect backlash. And it did come. Suffice to say, it was the minority 2 per cent but it was enough to get people talking, taking sides and lighting up social media,” Medas said.

The singer said despite the criticisms he has received; the 2021 Soca Monarch is “old news”. He is now more focused on producing more music to touch the lives of all while noting that that he has achieved all that he wanted to in the Soca Monarch competition.

Among the goals were to lift the standard of music; to take the Gospel to an unorthodox place and to inspire youth to ‘live and think outside the box’.

“Soca Monarch isn’t my thing, it never was. I don’t like competing and that’s the first competition I’ve entered, maybe since I was a teen. But I understand the ‘sometime-ish’ hostility and fine jabs because it’s a competition. I also feel it got monotonous over the recent years and can be better. But I’m on to the next thing. Soca monarch is old news. As a matter of fact, immediately after I released Stadium, I went back into the studio to do more music. That’s why four days after winning the crown, I released another music video,” said Medas who is working towards completing his album before the year ends.

The artiste disclosed that while growing up, his focus was “all over the place”, but his parents instilled in him sound principles.

“One time I wanted to be a pilot, then a cricketer, then at one point I didn’t know what I wanted to be. I spent two years at UG [University of Guyana] studying Literature and Linguistics, but In 2012 I decided that music was the only consistent thing in my life and I was good at it and had a passion for it, so I pursued it,” he told this newspaper.

His journey in the music industry has not been without challenges. Despite those challenges, Medas said he has had and continues to have “unwavering” support.

“People have always been appreciative of my music and supported it. I don’t worry about airplays, being underpaid, or anything. Of course, that came over time. But any struggles, I called that a “learning process” and ensured that I learned indeed. Like how to do up contracts so that I don’t get robbed, hiring myself a manager so that I maintain distance between myself and promoters and actually get to focus on just music,” Medas said.

Despite all the challenges he has faced, Medas’ fan base continues to grow and he plans to use his talent to spread Gospel.

Mon Apr 12 , 2021
Support Village Voice News With a Donation of Your Choice. …the story of Mark Kazim  By Gabriella Chapman   For Mark Kazim, being a product of Guyana’s Theatre Arts is a humbling experience as he is blessed with the unique opportunity to understand, feel and appreciate people’s lives despite class, colour, race or creed. Kazim, popularly known for his Chinese […]