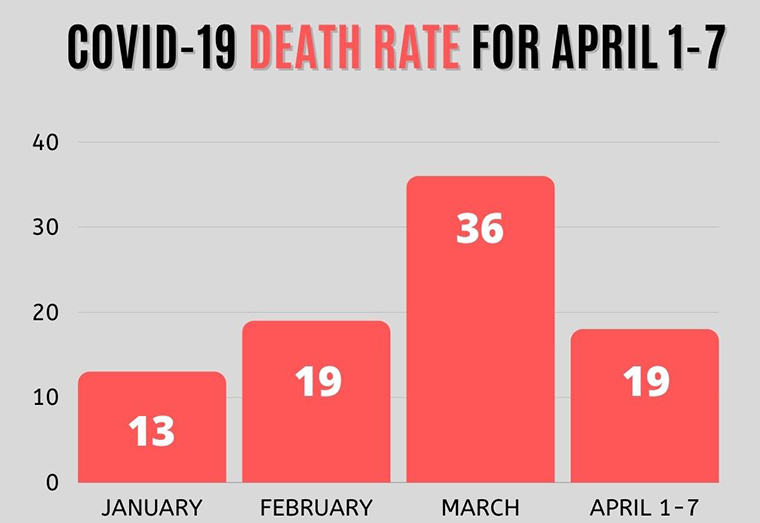 In the first seven days of April, Guyana recorded more COVID-19 deaths than the entire month of January and just as many deaths as the month of February.

There were 13 COVID-19 deaths in January and 19 in February. This is pressed up against the harsh reality of 19 COVID deaths within the first 7 days of the month. While March saw 36 deaths, the first seven days in April alone represent 52 percent of the total deaths for March. The rapid climb does not bode well for the country which has already recorded over 10,800 cases.

Sending shockwaves through the country, the highest number of persons to die as a result of COVID-19 in one day in Guyana occurred on April 6, with six deaths. While the country had gotten used to double deaths, the first week of April they were reintroduced it to triple deaths on April 4 and April 6.

Double deaths were present on April 1, 2, and 7. The least number of deaths — just one — occurred on April 5. It is fair to note that the month’s first week was “eventful” in a very negative way as the national total moved from 234 to 252.

Minister of Health, Dr. Frank Anthony has notified the public that the country is seeing an increase in cases and an increase in hospitalisation with many patients now requiring ventilators or assistance to breathe.  As the Opposition bemoans the management of the spread of the virus in Guyana, President Irfaan Ali continues to plead with Guyanese to take the virus more seriously. “I urge you to continue to follow the guidelines, I urge you to continue to stay safe; I urge you to continue to protect your families and your communities by adhering to the COVID-19 guidelines…we are not ahead of the curve. We are still managing this deadly pandemic. We need all stakeholders, we need all Guyanese on board,” he said in a recent message to the nation.

Meanwhile, Opposition Leader, Joseph Harmon said that his party is convinced that not enough is being done to prevent the spread of the virus or to put the best interest of Guyanese first. He has long called for a formal meeting with the President to discuss several matters. Among these is the dissatisfaction with the Opposition’s non-representation on the National COVID-19 Task Force (NCTF); the distribution of the COVID-19 relief cash grant; and preventative measures against the spread of the virus altogether.