A logger, who hailed from Wakenaam, was shot dead by his co-worker at Tiger Creek moments after he intervened in a heated argument between the suspect and another colleague. 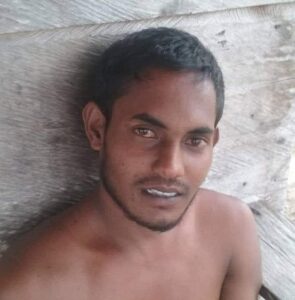 The victim has been identified as 29-year-old Rohit Hansraj called ‘Master’ of Wakenaam. He was reportedly shot dead on Saturday, May 28, 2022 at Tiger Creek, Essequibo River.
The Guyana Police Force, in a statement, said it has launched an investigation into the murder.
Preliminary investigation has revealed that Hansraj was allegedly shot by a 35-year-old co-worker of Alikie, Essequibo River at about 14:00 hours on Saturday.
The suspect and the now dead lgger both worked for Toolsie Persaud Logging Company as Operators in the Tiger Creek area, Essequibo River.
It is alleged that at around 14:00hrs on Saturday, Hansraj along with two other workers were consuming alcohol at the area when the suspect approached one of the other workers and accused him of “looking” at his wife.
Hansraj intervened and managed to get the suspect to return to his cabin.
The suspect, shortly after, returned with a shotgun to the cabin. Hansraj and the suspect became embroiled in an argument during which the suspect discharged a round from the firearm which struck Hansraj to his upper left shoulder area.
The suspect then escaped into some nearby bushes with the said firearm.
The police were subsequently informed and upon arrival at scene, the body of the deceased was seen laying face-up clad in a blue trouser and grey jersey. The body was examined and a gaping wound was seen to the upper left shoulder.

The body was escorted to the Bartica Hospital where an official pronouncement of death was given by a doctor.
The man’s body is presently at the Hospital’s mortuary awaiting a post mortem examination.
Police ranks in the Division are on the look-out for the suspect as investigations continue.

"...what happened to Ms. Tracy Flue and her three children at Barnwell, East Bank Demerara, is merely the tip of the iceberg..."

Mon May 30 , 2022
Support Village Voice News With a Donation of Your Choice. Dear Editor, I have elsewhere and again complimented Hon. Minister Dr. Vindhya Persaud for her compassion and efforts to manage a Ministry as a Minister should, that is to satisfy citizens who must operate and live within the confines of the subjects under that ministerial portfolio. For me, this makes […]