A 26-year-old Corentyne man was killed in a vehicular accident on Sunday after the car he was driving slammed into a culvert and subsequently an electrical pole on the No. 63 Public Road.
Dead is Kevin Alert – a resident of Eversham Village, Corentyne, Berbice.

The Guyana Police Force, in a statement on Monday, reported that the accident occurred at 22:50hrs on Sunday on the No. 63 Public Road, Corentyne, Berbice.
According to the police, Alert was driving a car #PAC 1403 at a time, in the company of Nicklous Johnson, age 21-year-old of No. 51 Village, Corentyne Berbice.
It is alleged that Alert was proceeding south along the No. 63 Public Road at a fast rate of speed, when he attempted to negotiate a right turn and lost control of the car. The car subsequently slammed into a concrete culvert then into a GPL lamp pole.
As a result of the collision, both the driver and occupant received injuries about their bodies. “They were picked up in an unconscious condition by public spirited citizens and taken to the Skeldon Public Hospital where they were seen and examined by a doctor on duty who treated and referred them to the New Amsterdam Public Hospital where they were further seen and examined by another doctor,” the police reported.
Johnson was admitted to the hospital and his condition is regarded as serious but stable. Alert succumbed while receiving medical attention.
His body is presently at the said hospital’s mortuary awaiting a post mortem examination.
The vehicle was lodged at the No.62 Outpost to be examined by a Licensing and Certifying officer.
Further Investigations are ongoing.

Mon May 30 , 2022
Support Village Voice News With a Donation of Your Choice. A logger, who hailed from Wakenaam, was shot dead by his co-worker at Tiger Creek moments after he intervened in a heated argument between the suspect and another colleague. The victim has been identified as 29-year-old Rohit Hansraj called ‘Master’ of Wakenaam. He was reportedly shot dead on Saturday, May […] 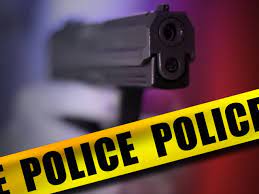