May 24, 2022 (IEEFA) – Guyana government officials face a decision on a request from ExxonMobil to renew an environmental permit for offshore oil operations that will continue a series of one-sided decisions that have given the company substantial financial benefits at the expense of Guyana’s taxpayers.

The release of Guyana’s annual budget plan highlights the continued, unsustainable reliance on oil extraction in the country. Two new IEEFA reports demonstrate that Guyana is both being short-changed by the amount of revenue from new oil ventures and that the country continues to enter agreements that benefit ExxonMobil at the expense of its own financial future.

“Guyana’s budget and willingness to grant new concessions to ExxonMobil put it in a precarious situation where they are unable to cover annual budget deficits and leave the taxpayers of Guyana on the hook later on,” said Tom Sanzillo, IEEFA’s director of financial analysis and co-author of the reports. “Tax giveaways and a reliance on oil for the country’s budgetary needs combine to make an already bad deal worse for Guyana.”

For the first time, the Guyanese government has drawn down its oil revenues for budgetary purposes. The budget increases have been heralded by the country’s leadership as evidence of the wisdom of oil and gas extraction for Guyana.

A careful examination, however, reveals several red flags. The amount of revenue from the new oil venture demonstrates that Guyana is being short-changed, and the use of the revenue shows that Guyana has mismanaged its initial share of the profits.

In short, this year’s budget shows that oil revenues collected to date:

“Today’s reports show that the government of Guyana continues to overly rely on the oil industry to expand its budget,” said Sanzillo. “This overreliance and continued tax breaks will only continue to leave taxpayers on the hook.”

IEEFA’s reports have warned the Guyanese government and its people that the contract is front-loaded, one-sided and riddled with tax, decommissioning and other loopholes that favor the oil companies. The lack of transparency also hurts the interests of Guyana.

IEEFA’s research findings could have been substantially improved if the government and ExxonMobil had provided routine reports containing basic operational and financial information. Despite repeated public requests to do so, however, neither the government nor ExxonMobil has made such disclosures.

Wed May 25 , 2022
Support Village Voice News With a Donation of Your Choice. The Ministry of Public Works’, Transport and Harbours Department (T&HD) on Tuesday commissioned the new $84 Million Fort Island stelling which is the fulfilment of a commitment made by the ministry in 2021, after numerous complaints by residents. At the commissioning ceremony, Minister Bishop Juan Edghill, M.P, said residents Fort […] 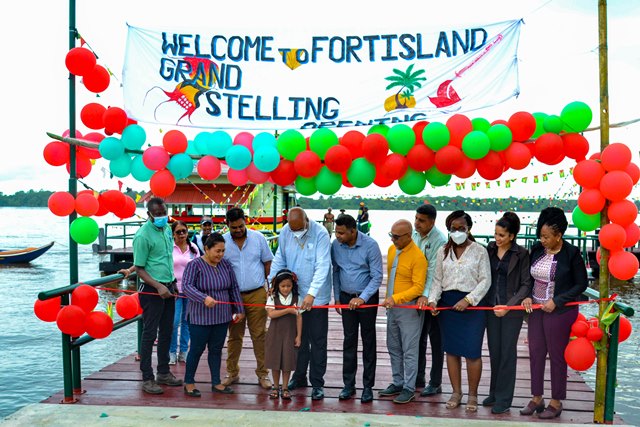