Matters related to national governance in the fullest sense of the word, from all indications, seem at a standstill in Guyana presently. The PPPC Government has drawn its bright red line in the hard sand, while the Coalition Opposition rigidly stays behind its barricades. Both sides man their respective silos, with none inclined to yield any ground, while in the meantime a nation struggles manfully forward in fits and starts. It has been said that politics is the art of compromise, wise and practical compromise. We seem to have forgotten about that in the tests that come before us in the aftermath of bruising, wounding elections.

We Guyanese may have forgotten about, have no use for, the power of compromise, and the progressive pathways that it makes possible. In the White House, the main occupant who was known for his skill at working out comprises in tense and difficult situations, seems to have lost the touch that he once had, and for which he was renowned. It must be this contagious disease called politics and the powers that come from it. In the United States Congress, that noble house of American lawmaking has become a confirmed battlefield for total war (none of which can be remotely declared to be just) involving rancorous partisan politics, rather than a bully pulpit for the artful compromises that lead to thorny issues and matters being worked out. Everyone could claim some slice of victory, none left with the bitter taste of the ashes of outright defeat. Though we have had our own incendiary history of brutalizing and degrading political warfare, mostly of a guerilla character, our political leaders appear to be gifted with an endless capacity for the vicious and vindictive, the meanspirited and malicious, with the mischievous thrown in for added sting. Because Americans are so much a part of our political environment and political governance arrangements, it stands to reason that the long line of Guyanese leaders have learned well under their tutelage about standing ground and throwing down the gauntlet in the faces of adversaries.

Because comprise has been forced to flee to the wilderness, for all the reception and consideration that it gets in powerful political circles, it was refreshing to come across the same missing art of compromise, and works of compromise in the judicial arena. The New York Times did the honors: “California’s Supreme Court was split. Leondra Kruger found the center” (New York Times, February 6). As the Times strapline gushed, “Known for her ‘elegant’ mind, the moderate judge, now on President Biden’s short list of potential high court nominees, could be a moderating force in Washington.” There it is in black and white -a moderate judge, which reflects the nature of the person behind the office, and a “moderating voice” which is trouble to be the owner of anywhere today, be it America or Guyana.

But the nuts and bolts of Justice Kruger’s work has been given her “a reputation as one of the most influential judges on the highest court in the nation’s most populous state.” If she is the one nominated from President Biden’s short list for the U.S. Supreme Court, she could “become not only the first Black female justice, but also a mediating force on an institution notable for its polarization.” As the Times said, she is recognized across the spectrum for moderation, which is her defining hallmark. The chief justice of California’s Supreme Court spoke of her as “a consensus builder” and one who is “very persuasive in bringing groups together on different legal arcs.” Since her arrival on California’s split Supreme Court, one notorious for its partisanship and division, the court has voted unanimously on 9 out of 10 decisions. It is one that is a far cry from the record of before, and which puts the U.S. Supreme Court to shame where unanimity is concerned.

We know all too well of such bitter and crippling partisanship and division in Guyana’s politics and most walks of local life. If only we could have a consensus builder, an influential one, we could get to that higher ground that has always eluded. Who is there and where is it, are the questions? We needed robust Guyanese leadership from the PPPC Government to delay the fourth oil project, Yellowtail, so that Exxon would be made to see things our way.

We didn’t have, clearly lacked the sturdy unified leadership platform, to present a posture of representing all the peoples of Guyana before Exxon to diminish its thrusts and strengths. So, we lost out again, we fell before the foreign invaders again. And we end up paying a cheap price for the biggest oil prize yet, Yellowtail, for our uncompromising, divided, national presence when we need it the most. When such compromising, such leadership wisdom will be, is the forlorn guess of any Guyanese.

Sun Apr 3 , 2022
Support Village Voice News With a Donation of Your Choice. GTT has collaborated with the Guyana Fire Service (GFS) to modernise its calling and reporting infrastructure through the donation of four phones equipped with caller ID and recorders. Revealing that the GTT Business Solutions team is committed to a continued partnership with the Fire Service, Sales Lead of GTT Business […] 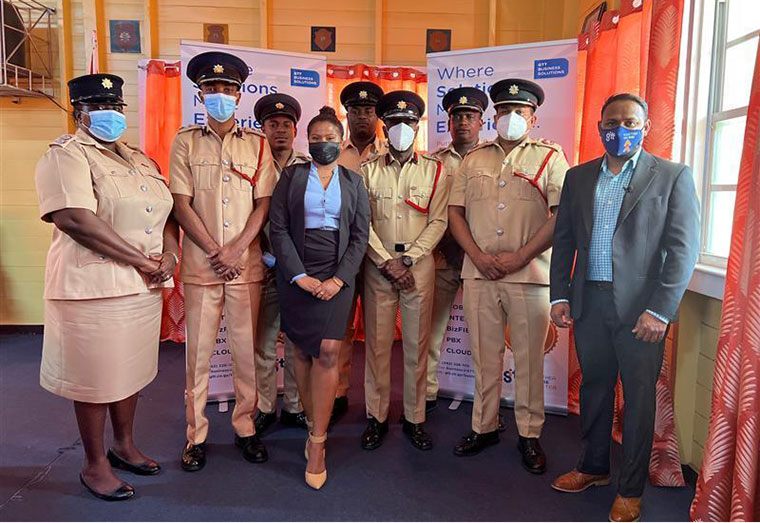